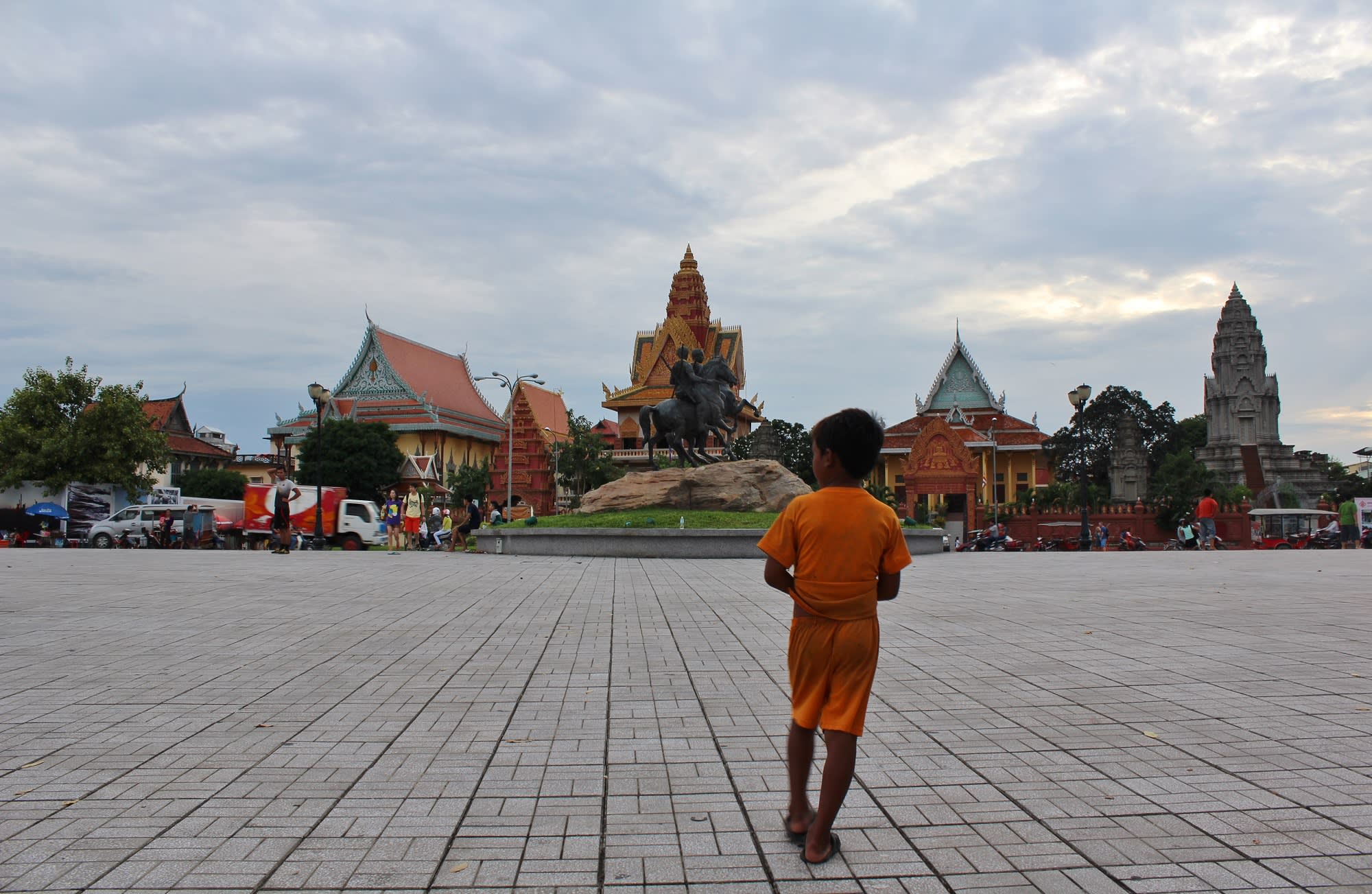 PHNOM PENH -- Cambodia's tourism industry is under pressure to reinvent itself as the growth in international arrivals sinks to lows not seen since the 2008 global financial crisis amid a slowdown in Chinese visitors.

Total international tourist arrivals grew just 6.1% year on year in 2015, the lowest rate in six years, according to the tourism ministry. In the first quarter of 2016, total arrivals rose just 2.6% from a year ago.

The slowdown is largely due to lower growth in arrivals from China, Cambodia's second largest source market after Vietnam.

China has been a main source of tourism to Cambodia in recent years, recording strong annual growth rates of 35% to 40% between 2010 and 2013. Tourists take photos of an ancient temple at the Angkor Archaeological Park in Siem Reap. (Photo by Nathan Rogers)

The flow of tourists from China has spurred robust growth in the hotel, tours and airline sectors, following a major marketing push by the government aimed at drawing around 2 million Chinese visitors per year. Phnom Penh and the northwestern province of Siem Reap, home to the ancient temples of the Khmer Empire, are the most popular tourist spots.

But since the political unrest and subsequent coup two years ago in Thailand -- which serves as a major transit point for Cambodia -- Chinese arrivals have risen by just over 20% in each of the last two years.

A report by the Sydney-based Center for Asia Pacific Aviation (CAPA) said a reason for flagging Chinese arrivals to Cambodia is "partially a reflection of the overall economic slowdown in China", and the growing popularity of Vietnam as a destination.

But Wolfgang Georg Arlt, director of the China Outbound Tourism Research Institute, does not think China's slowing economy is having a big impact, and notes that a trip to Cambodia is still "pocket change" for wealthy Chinese.

"[This] might be bad news for Maserati dealers, but a few thousand U.S. dollars for a trip to Southeast Asia is still not a great concern for affluent Chinese," said Arlt. Among Chinese travelers, Japan and Thailand are "more en vogue at the moment," he added.

Thourn Sinan, chairman of the Cambodia chapter for the Pacific Asia Travel Association, said the government is still aiming to eventually attract around 2 million Chinese visitors per year compared with just under 695,000 in 2015, as the "market is still strong," he told the Nikkei Asian Review.

However, it is not just Chinese tourist numbers that have taken a knock. Last year, Cambodia saw a drop in tourists from South Korea, Japan and Laos.

As sources of tourists, South Korea -- a growth market a few years ago -- and Japan are "now mature," noted Brendan Sobie, chief analyst for CAPA.

He added that hotel guests are spending less on food and beverages, while many smaller operators have been forced to close as profits dwindle.

"It will be a tough year. The smaller [hotels] are going to have a difficult time," said De Suremain, who owns a string of classic boutique hotels in Cambodia including the popular Pavilion and Plantation hotels, both in Phnom Penh.

Cambodia's annual economic growth is strong, consistently hovering around 7% a year. But the country is under pressure to move away from basic services and manufacturing to higher-value industries.

Slowing visitor numbers to Cambodia underscore the importance of diversifying an industry that accounts for about a third of gross domestic product by encouraging tourists to see more than the historical site at Siem Reap.

In a recent study on the tourism industry, the Asian Development Bank said that short tourism trips to key temple sites would support growth to an extent, but noted that "overall potential growth from these sources is limited." The report added that Angkor Wat's enduring status as the country's biggest tourist draw "highlights the sector's lack of diversification".

Niels Steeman, marketing manager for Asian Trails Group, said both tourist spending and stay periods have remained largely flat in the last five years and will only be boosted if the country can widen its appeal. "There's much more to do than just see the Angkor temples, but that's something people just don't see," Steeman said.

One problem that has inhibited travel to other areas outside the main tourist destinations is poor infrastructure and limited transport -- an issue the ADB has advised Cambodia to address if it wants to diversify tourism beyond Angkor Wat and the temples.

For years, the government and the private sector have been trying to figure out ways to attract tourists to the southwest coast. Coastal resort areas such as those around Sihanoukville, Kep and Kampot are popular with locals and expats, but are still relatively off the map for foreign tourists on a short break because of limited flights and bumpy, unlit roads that result in long journey times.

Sihanoukville's tiny airport handled less than 100,000 people last year, as most domestic and international airlines prefer to chase the more profitable routes between China, Vietnam and Thailand and Phnom Penh and Siem Reap.

The coast's obscurity is also due to Cambodia's failure in promoting its beaches, with many tourists believing they are inferior to those in Thailand and Vietnam, said Steeman, who adds that Cambodia remains something of a "bucket list" destination for many.

There is hope that the recent renewal of train service to the coast after 14 years will increase visitors. But while the fare is cheaper than that for buses, it takes longer to make the 266km journey from Phnom Penh.

However, Luu Meng, president of the Cambodia Hotel Association, believes one way to stimulate travel around the country and encourage spending is to make it more appealing to more discerning customers.

A Marriot hotel is due to open this year in Siem Reap and a Rosewood hotel next year in Phnom Penh. A Shangri-La, Novotel and Sheraton are in the pipeline, Meng told the NAR.

Such developments may go some way to attract a broader portion of the Chinese market.

"Cambodia certainly needs a more carefully developed strategy for the Chinese market, to get not only the lower end of the market, but more upper end visitors," Arlt explained.

While changing tack may invite a wealthier class of traveler, the industry will need to balance commercialization with the country's rustic beauty, which for many is still its allure.

"Phnom Penh has got that charm to it -- a bit of European mixed up with Asian," said Robert Thomas, an English teacher living in Bangkok who recently traveled through Cambodia.

Cambodia's simplicity and "liberating discord" have allowed the country to preserve its soul in a way that its more developed neighbors have lost, added Thomas. "You feel the history of the place in walking around, whereas Bangkok feels immersed in modernity."

Many tour operators hope there is still money to be made from mass travel, with tens of millions of middle-class Chinese desperate to see the world. Whether they remain interested in Cambodia will depend on the country's brand remaining strong and relevant.

Even so, some warn, the government and industry cannot rely on simply extolling the beauties of Cambodia and milking the same old sights. Tourism needs investment to expand and diversify, and infrastructure needs to be built to take people across the country, noted Steeman of Asia Trails. Perhaps then, he added, people will see the country as a destination in its own right, rather than something to "tick off on a bucket list."