Tourists to Japan now spending more on the cheap

Inexpensive consumables are in, high-priced luxury items are out 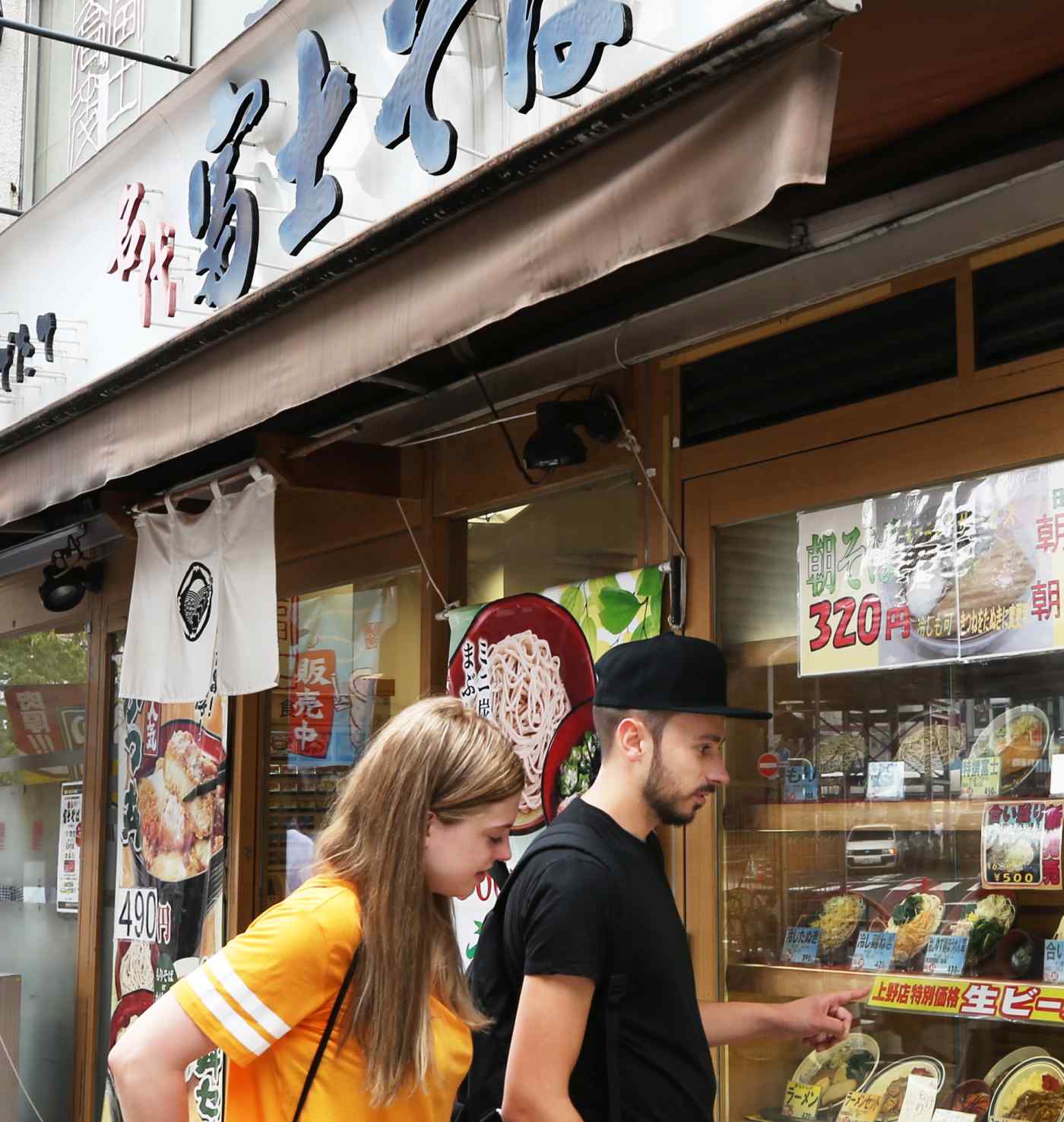 A foreign couple looks at model food in a window at a Nadai Fuji Soba restaurant in Ueno, Tokyo.
August 29, 2017 18:24 JST | Japan
CopyCopied

TOKYO -- Three times a week, late at night, a convenience store near the Sensoji Temple in Tokyo receives a large shipment of a rather innocuous product.

Made by UHA Mikakuto, the candy is said to be a must-have among Asian tourists. Probably it is the uniquely chewy texture, a Seven-Eleven Japan official said, trying to explain Cororo's popularity. One man from Thailand bought 42 packs of the candy for his family and friends, mentioning that it is known throughout Thailand.

UHA welcomes the business, but is somewhat perplexed because Cororo is not marketed to foreign tourists.

The consumption patterns of foreign tourists to Japan are changing since the crush of Chinese embarking on lavish shopping sprees ended two years ago. Bulk purchases of jewelry and luxury watches are out, and inexpensive consumables, such as cosmetics and foodstuffs, are in.

But items popular with tourists might be viewed differently by Japanese. And visitors especially tickled by something commonplace might start an unexpected boom. All it takes is for a product to go viral over social networks and, in no time, manufacturers and retailers are dealing with throngs of foreign customers.

Fuji is "a typical Japanese name that sounds good," a 30-year-old tourist from Bulgaria said. "Rice bowl with curry and deep-fried port cutlet were so tasty."

"The naming was perfect," Tan said, admitting that today's global name recognition was unimaginable when he opened his first restaurant 50 years ago. Daitan has taken advantage of the Fuji name to open branches in Taiwan and Singapore.

At Bic Camera Akiba, a consumer electronics store that opened in June, inexpensive food products and cosmetics, rather than television sets and mobile phones, occupy the first and second floors. Powdered green-tea chocolates, over-the-counter drugs and other products popular with Chinese tourists are displayed near the entrance.

Chinese- and English-speaking tourists crowd the store during the day on weekdays. When the first two floors get really busy in the late afternoon, staff from home appliance sections leave their posts to help deal with the shoppers.

A 22-year-old Chinese student who had purchased a number of cosmetics for his girlfriend said, "I like Shiseido." Another Chinese, seen hunting for cosmetics sourced on the web, stated, "I don't buy home appliances."

At the nearby flagship store of Laox, known as a mass discount retailer of consumer electronics, an over-the-counter cosmetics sales section opened earlier this year. According to the chain's president, Luo Yiwen, demand has shifted from high-end products to mass-consumption items.

Manufacturers of brands fortunate to be in vogue with foreign visitors are also benefiting. Shiseido set new highs in both sales and operating profit in the first six months of 2017. This came amid a 40% increase in sales to foreign tourists over the past year. The day after the company released business results on Aug. 9, its stock price jumped 15% in intra-day trading.

After being targeted as essential buys on an information website in China three years ago, Santen Pharmaceutical's Sante Beauteye eye drop, Hisamitsu Pharmaceutical's Salonpas pain reliever, SSP's Hythiol-C whitening supplement and nine other over-the-counter medications saw their popularity soar among Chinese tourists. The items, which have retained their popularity, are known as the "12 divine medicines."

While demand for the products varies, Kobayashi Pharmaceutical, which produces five of the 12, is now extremely well-known among Chinese tourists. The increasing number of Chinese on the prowl for other Kobayashi products has caused sales of the company's Eyebon eyewash liquid and other items to take off.

Thanks to this, Kobayashi posted a net profit of 7 billion yen ($64.3 million) in the January-June period of 2017 -- 2 billion yen more than projected. "I thought demand among foreign visitors would no longer increase, but it was much stronger than expected," said company President Akihiro Kobayashi.

Meanwhile, department stores saw sales drop last year due to a slowdown in bulk purchases. But the increasing number of tourists crowding the stores has revealed no shortage of demand. Sales of duty-free items have continued to rise year-on-year since December last year, and are starting to top those of the Chinese shopping-spree days of two years ago.

Consumption patterns among foreign tourists have changed "merely because bulk purchases for the purpose of reselling have ended," said Toshihiko Sugie, president of Isetan Mitsukoshi Holdings.