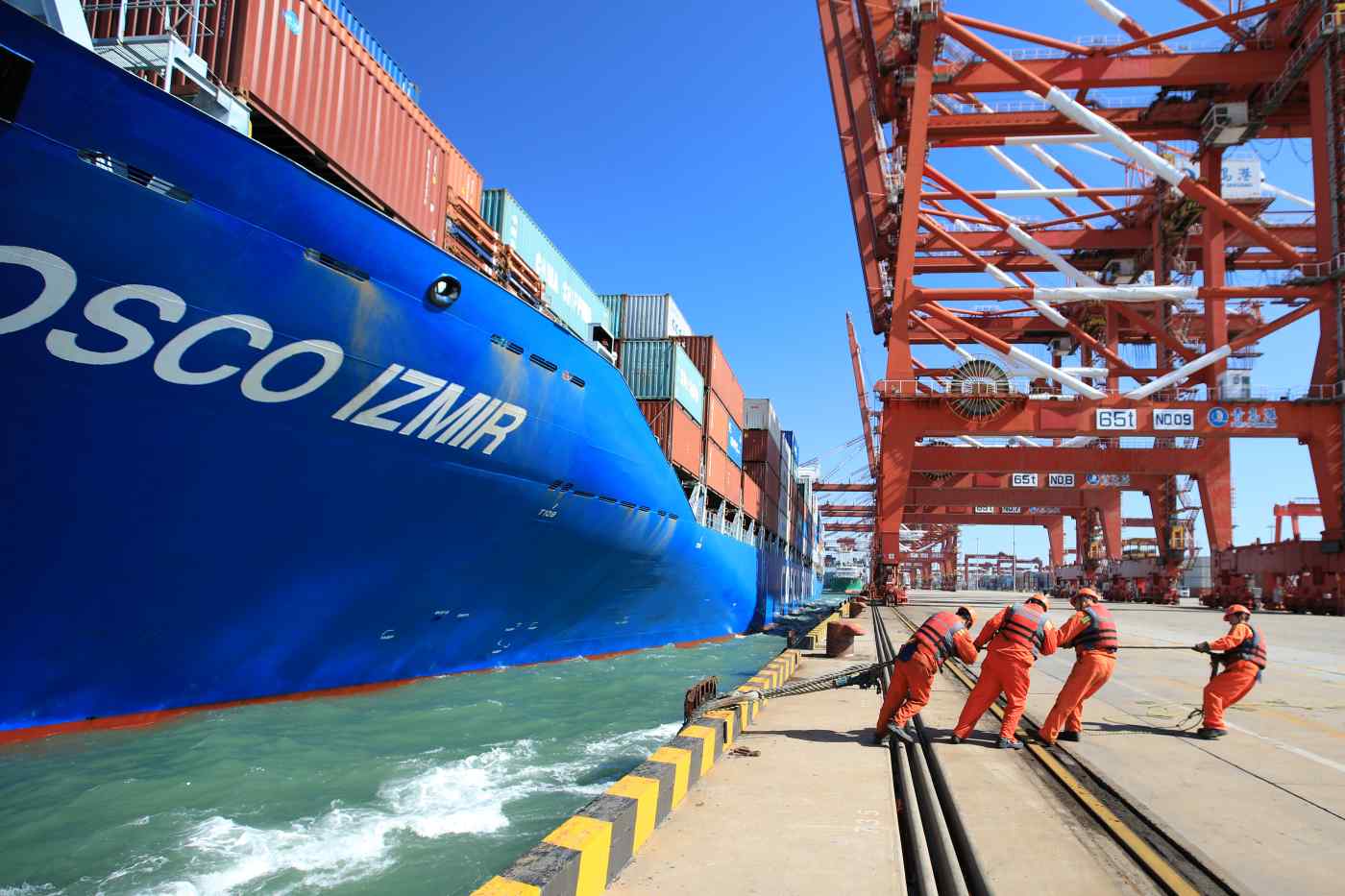 A containership docks at a port in Qingdao, in China's Shandong Province. Economists see the trade war as the primary risk to the country's economy in 2019.   © Reuters
TAKESHI KIHARA, Nikkei staff writerDecember 26, 2018 16:45 JST | China
CopyCopied

HONG KONG -- China's economy will grow at the slowest pace in 29 years in 2019, as the true impact of the trade war with the U.S. sets in, a new survey of economists projects.

The world's No. 2 economy is expected to expand 6.2% in real terms, based on the average forecasts of 32 economists polled by Nikkei and its group company, Nikkei Quick News. China's outlook is becoming murkier, with many of the economists saying the effects of fiscal stimulus and other measures are unlikely to show up until the second half of 2019 or thereafter.

The economists' individual forecasts range widely, from as low as 6% to up to 6.6%, but most project a slowdown from 2018.

For the October-December period of this year, the economy is expected to grow 6.4%, down by 0.1 of a point from the previous quarter. For all of 2018, the growth rate is forecast to reach 6.6%, clearing the government's target of around 6.5% but falling short of the 6.7% logged in 2016.

Chinese growth has not been this slow since 1990, when the economy was thrown into confusion after the Tiananmen Square crackdown the year before. And the economists foresee an even poorer performance in 2019.

The trade war will shave 0.6 to 0.8 of a point off China's gross domestic product growth, Kenny Wen of Everbright Sun Hung Kai said, adding that a slowdown will be unavoidable even if the government takes countermeasures like boosting infrastructure investment and cutting taxes.

The trade war is already taking a toll. In November, retail sales grew at the slowest clip in 15 and a half years.

Shen Jianguang of JD Finance said that consumer spending and investment have fallen into the doldrums, and that the property market will enter a downtrend in two years' time.

Xia Le of BBVA said, "The downward adjustment of the housing market as well as high local government and corporate debt also weigh on growth."

Yao Wei of Societe Generale Corporate and Investment Banking warned: "Trade tensions look unlikely to be resolved quickly and will soon cause material drags on exports. The economy will face greater challenges in 2019."

Asked to pick from multiple factors that could cause an economic downturn, 12 of 17 economists selected for an extended survey said a more intense trade war is the No. 1 risk. "The theme [of the conflict] will extend from trade friction to technological hegemony, and consumer and investor sentiments may become worse while the confrontation prolongs," said Mihoko Hosokawa of Mizuho Bank (China).

Cheng Shi of ICBCI said that although there may be a lull, the U.S.-China confrontation will drag on, and that the trade friction will fuel market volatility.

The 17 economists were divided over what to expect from the 90-day talks between Beijing and Washington on trade and structural problems. While five said the U.S. would agree to defer additional tariffs, four said new levies would be imposed. Five others said the negotiations would continue beyond the 90 days. 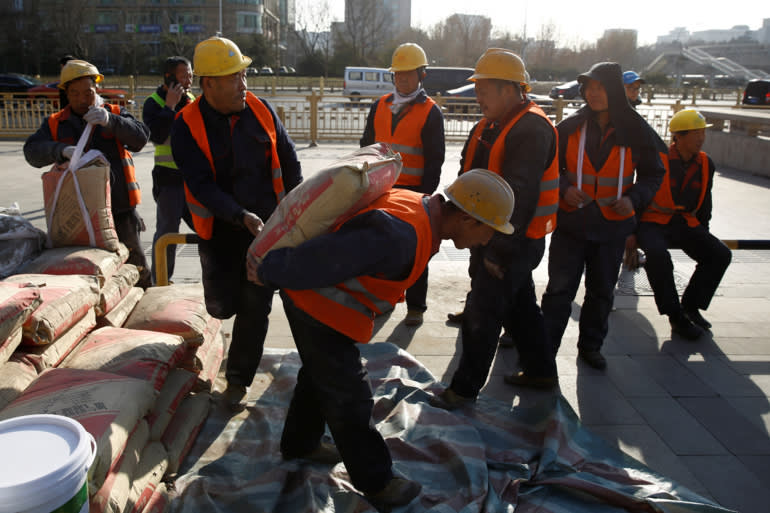 A builder carries a sack of cement in central Beijing on December 19.   © Reuters

"The structural changes required by the U.S. are too difficult for China to deliver," said Kevin Lai of Daiwa Capital Markets, one of the four economists who are skeptical about the possibility of a deal. "To reach an agreement means that China will have to abandon the China Model and run the risk of political destabilization."

"The timing of a potential U.S.-Chinese agreement is difficult to predict," Taylor said. "Our base scenario is by the end of Q1 2019."

Many see the "forced transfer" of technology to Chinese companies as a major sticking point in the talks.

Although China may come to terms with the U.S. on the bilateral trade imbalance and intellectual property rights, it may be unable to compromise if the U.S. takes issue with its high technology and other industrial policies, cautioned Tetsuji Sano of Sumitomo Mitsui Asset Management. Sano noted that China has already become reliant on high value-added industries and cannot halt its policy of promoting more sophisticated lines of business.

While Arjen van Dijkhuizen of ABN AMRO Bank said China is "unlikely" to give up its state capitalist model, he said that "it is possible that some compromise could be found in the areas of intellectual property protection." Either way, he said, "Strategic competition between the [countries] will stay in the coming years." Asia economy in 2019 at the mercy of Trump's trade policy

In their assessments of the trade war for the coming year, the economists were also split. Seven said it would cool off gradually, while four predicted few changes and the same number said it would worsen.

"Taxing the remaining half of Chinese exports to the U.S. would start to severely hurt the U.S. consumer [and U.S. President Donald] Trump's voter base," said Susan Joho of Julius Baer. "So [Trump] may be more careful to risk that quickly. Raising the existing tariff rate from 10% to 25%, however, is still likely in 2019."

Despite all this, China's economic measures are expected to keep growth above 6%. The Central Economic Work Conference, held recently to determine the country's economic management policy for 2019, made it clear that President Xi Jinping's administration plans to shore up the economy with aggressive fiscal and monetary maneuvers.

Stimulus measures introduced after July 2018 are starting to pay off and steady growth of over 6% is likely to continue, said Fan Xiaochen of MUFG Bank. Xie Yaxuan of China Merchants Securities predicted that growth will bottom out in the second half of 2019 thanks to the measures.

Many of the economists said the government will mainly rely on fiscal moves like tax cuts and infrastructure investments. "We expect fiscal policy to do more heavy lifting to support the economy than monetary policy," said Aidan Yao of AXA Investment Managers.

"We expect China to use fiscal and monetary stimulus in order to maintain an acceptable rate of growth, which probably means anything above 6%," said Richard Jerram of Bank of Singapore. A number of other economists suggested Beijing would pull out all the stops to achieve its goal.