Abe keeps his cool as Trump talks tough on trade 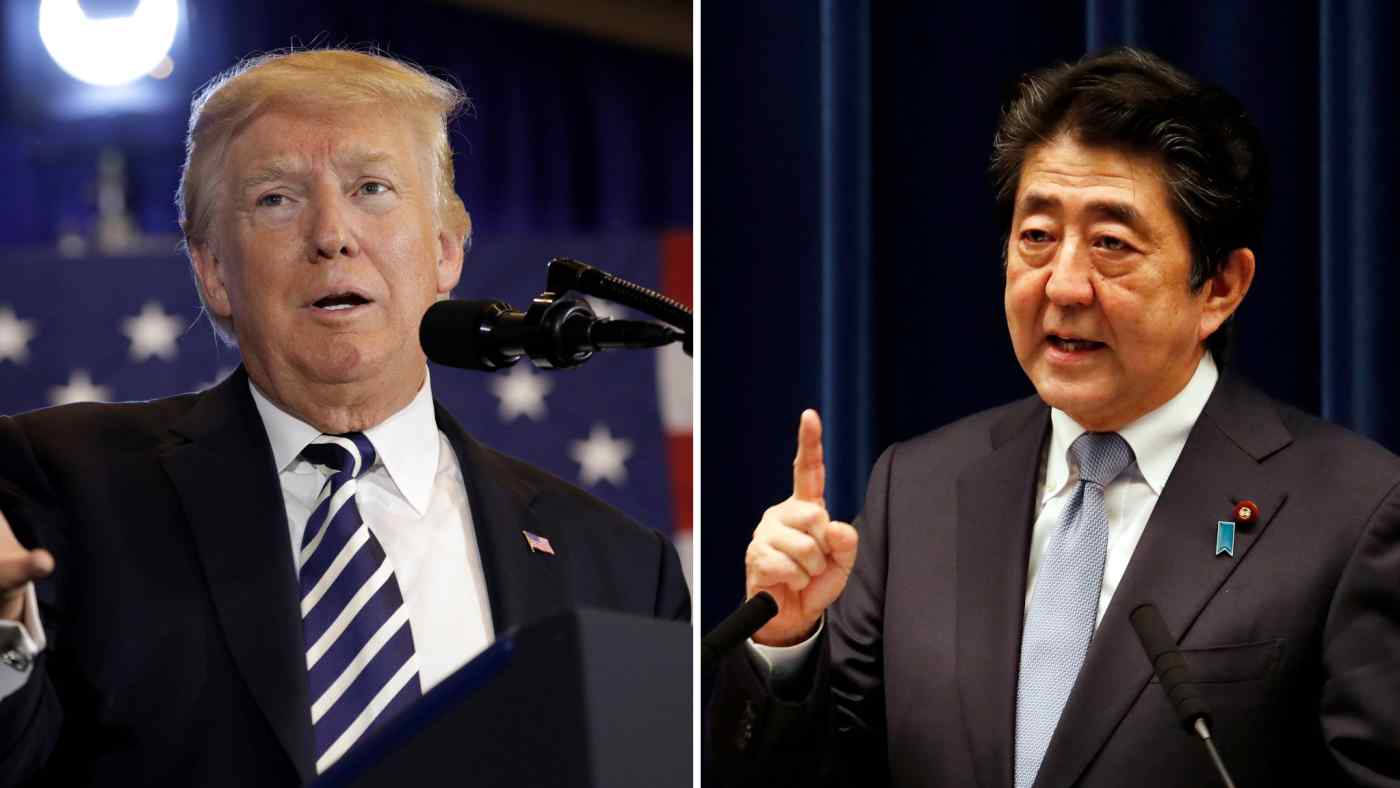 TOKYO/WASHINGTON -- Japan is putting on a brave face as U.S. President Donald Trump pushes hard to shrink the bilateral trade imbalance, as Prime Minister Shinzo Abe knows that making concessions on agricultural products will hurt him in the ruling party's leadership race.

Trump said on Friday that the two countries are starting discussions on trade. "And I'll tell you, if we don't make a deal with Japan, Japan knows it's a big problem," he said.

Tokyo would not deal with predecessor Barack Obama "because they felt there was going to be no retribution. ... And, in my case, they feel just the opposite," Trump said.

The U.S. will be bringing up automobiles and agriculture in talks with Japan, a White House official said.

Abe on Saturday did not comment on Trump's latest remark as he attended a cabinet-level meeting about the deadly earthquake that struck Hokkaido earlier in the week. No senior officials from the Ministry of Foreign Affairs were summoned to the prime minister's office that day, either.

Two days earlier, Abe told Toru Nakaya -- head of JA-Zenchu, the Central Union of Agricultural Co-operatives -- that he has let Trump know that Japan cannot concede more than it did in the Trans-Pacific Partnership negotiations.

The Japanese farm lobby is upset that Abe had once shared its caution regarding the TPP, only to change course and join the TPP talks. The Abe camp now worries that if agricultural product tariffs become a major issue, they could help his rival in the Sept. 20 election for president of the ruling Liberal Democratic Party: former Defense Minister Shigeru Ishiba, who seeks to win rural votes.

The trade talks between Japan and the U.S. are also complicated by global developments. The U.S. and the European Union agreed in July to enter talks on lowering tariffs, and Washington reached a basic agreement last month with Mexico on revising the North American Free Trade Agreement. Meanwhile, the U.S. and China are imposing tit-for-tat tariffs on each other.

Trump has railed against the U.S. trade deficit with Japan since his 2016 presidential campaign. And an American negotiator for the "free, fair and reciprocal" bilateral trade talks acknowledges that Trump is targeting Japan. Although Japan is prepared to make proposals, his governing style has made it difficult to find areas for compromise.

Japan-U.S. relations previously played out in a bottom-up format where lower-level American officials acted under a president who had their backs. But this has all changed under Trump.

It has become clear that only Trump knows his true intentions. Even U.S. Trade Representative Robert Lighthizer cannot make decisions without first consulting Trump, a Japanese official involved in last month's trade talks said. This is why trade negotiations rely heavily on the personal rapport between Trump and Abe.

Even if Japan understands what Trump wants, whether it can meet these demands -- possibly increasing imports of liquefied natural gas and defense equipment -- is another matter. Abe is seen as certain to win the LDP presidential race later this month, but local and upper house elections are coming up next year. He has few options if he has to be careful not to anger voters.

Trump has threatened a 25% additional tariff on imported automobiles even though such measures would violate World Trade Organization rules. He has used the threat of auto tariffs in talks to renegotiate NAFTA with Canada. The retribution against Japan that he hinted at is none other than a tariff on Japanese vehicles.

American automakers are pressing Washington to introduce a currency provision to prevent Japan from weakening the yen to boost auto exports. Since exchange rates have a big impact on the Japanese economy, losing freedom to carry out foreign exchange policy is risky for Japan.

Now that the U.S. has reached deals with Mexico and the EU, as well as imposed tariffs to increase the pressure on China, Japan is its only major trading partner left where it has yet to act on a large trade deficit.

Abe and Trump are expected to meet in the U.S. later this month. Some in the Japanese government hope that a round of golf with the prime minister will help soften the American leader's stance.