TOKYO -- China's efforts to wean itself off U.S. energy is raising concerns that American producers will be left with a glut of liquid natural gas and, consequently, investment delays in planned projects.

China raised retaliatory tariffs on LNG from the U.S. to 25% on June 1 after Washington's recent decision to increase tariffs on most Chinese goods. The move, which could see a buildup of American LNG, casts fresh doubts about the country's energy export strategy.

For the year through March, China accounted for only 2% of America's LNG exports, according to data from the U.S. Census Bureau.

"These new deals further cement the Chinese-Russian gas relationship in a year when the first sales of Russian gas to China through Gazprom's Power of Siberia project begin," said Nicholas Browne, director of gas and LNG research at Wood Mackenzie.

The deal "opens opportunities for investing in the development of the end-consumption segment on one of the largest and the most quickly growing gas and LNG market across the globe," said Novatek CEO Leonid Mikhelson.

The shifting landscape clouds the optimism expressed by U.S. President Donald Trump just weeks ago. "You will very soon be exporting clean American natural gas all over the globe," said Trump in mid-May, speaking to workers at Cameron LNG in the state of Louisiana, which began gas production last month.

The president stressed that the workers made the country wealthier and "safer by making American energy independent." Trump added, "We don't need anybody."

"This year will likely see four or five more projects approved," said Hiroshi Hashimoto, senior analyst at Japan's Institute of Energy Economics. But he warned that slowing demand from China could "delay final investment decisions on the projects." 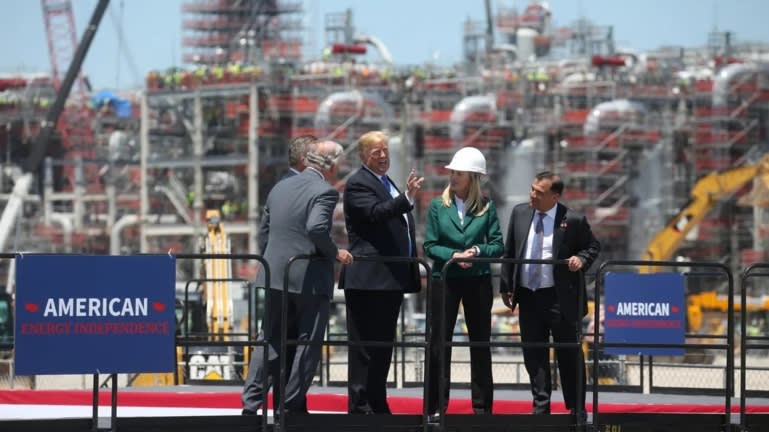 President Trump speaks with managers and executives during a May visit to the Cameron LNG export facility in Louisiana.   © Reuters

A joint development agreement for LNG production in the U.S. state of Alaska was supposed to be signed in December but is now on hold. The agreement -- between state-affiliated Alaska Gasline Development Corp. and China's Sinopec, Bank of China and China Investment Corp. -- would hand the Chinese 75% outtake rights to a $43-billion natural gas project.

The planned project is one of a number in the U.S. that arose "in anticipation of China's increasing demand," said Mika Takenaka, director of the energy research division at Japan Oil, Gas and Metals National Corporation.

But since many major Chinese energy giants are state-owned, the political winds of change affect Beijing's energy purchases. Owing to Sino-U.S. tensions, these companies are now reluctant to invest in, and make a long-term contracts with, American suppliers.

PetroChina signed a 25-year purchase deal with U.S. giant Cheniere Energy in February 2018, but since the trade war escalated, has refrained from importing American LNG.

The U.S. kicked off the trade war by slapping tariffs on Chinese goods in July 2018, to which China responded two months later with 10% tariffs on American LNG and other goods.

China's demand for LNG has surged partly because of its embarking in 2018 on an aggressive three-year plan to tackle the country's notorious air pollution by phasing out reliance on coal, quickly becoming the world's second-largest importer of LNG.

Roughly 15% of American LNG exports went to China in 2017, as Beijing hoped that its large energy purchases from the U.S. would deflect Washington's criticisms over the trade deficit with its Asian buyer. 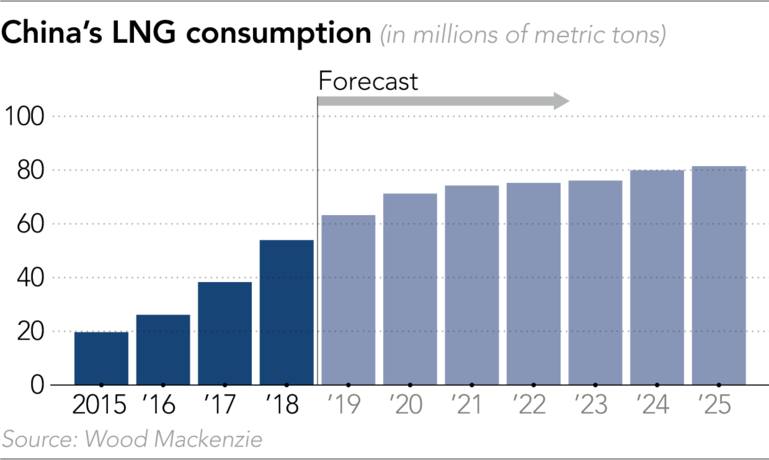 But since the tariff tit for tat, China has received only four shipments of LNG, compared with the 35 between September 2017 and April 2018. This is despite the 32% growth in Chinese LNG imports and 38% increase in U.S. exports, according to Browne at Wood Mackenzie.

Browne noted that China's LNG demand this year will reach nearly 63.2 million tons, and hit about 81.5 million tons in 2025.

Meanwhile, U.S. natural gas suppliers have been adjusting output to cushion the impact of the dispute. Shell, for instance, distributes LNG from different regions around the globe, which reduces the company's dependence on U.S. output.

But decreasing Chinese demand will continue to stymie growth in the U.S. energy sector. With China buying far less American LNG, Washington is pressuring Europe to pick up the slack.

Spot LNG prices in Asia stand at around $4.50 per million Btu, down 49% from January. Prices have been relatively stable over the past few months at the $4 to $5 level. A prolonged trade war, however, could put more pressure on prices over the long term.