SYDNEY -- Amid deepening confusion over U.S.-China trade relations, Australia finds itself both hopeful and anxious as two of its most important trade partners exchange threats. While Australian wine producers will likely benefit from higher Chinese tariffs on U.S. goods, the country's iron ore and pork industries could be squeezed if trade tensions continue to escalate.

The U.S. imposed broad restrictions on steel imports in March, but "on its own, the tariff is a relatively small intervention, particularly in Asia," said Andrew Mackenzie, CEO of major iron ore exporter BHP Billiton.

Australia was exempted from the curbs, along with South Korea and Brazil, but ultimately the problem lies with how China's steel production affects its iron ore imports. Mackenzie is not worried. "The vast majority of the products that are made in Asia using our raw materials are not exported to the United States," he said.

The calm expressed by Australia's major resource producers stems from confidence that China is tackling its steel overcapacity problem, and that domestic demand for steel remains firm.

But if protectionist sentiment spreads, global free trade will be threatened, said Mackenzie. Market watchers are worried that a protectionist domino effect emanating from the U.S. would affect markets for resources and goods over the long term. 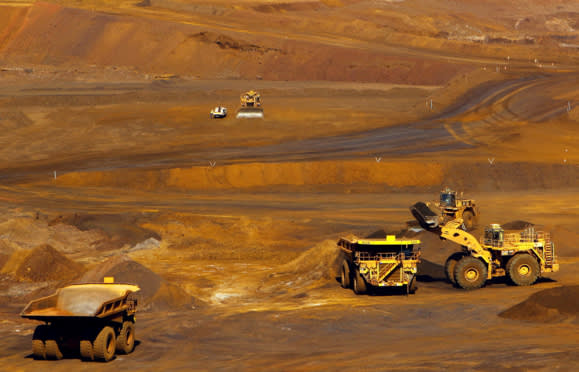 Iron ore at a Fortescue Metals mine. As long as protectionist sentiment does not spread, Australia's resources market should be spared fallout from the U.S.-China trade tiff.   © Reuters

China is Australia's largest trade partner, importing 110 billion Australian dollars ($82.5 billion) worth of goods for the year through June 2017 -- more than double the A$44.6 billion of Japan, its second-largest partner. Resources account for most of China's imports from Australia, but agricultural products also play a role. When China imposed high tariffs on U.S. wine and farm products in April, Australia's wine producers stepped in to grab a larger share of the Chinese market.

"Australian wine exporters [have] a competitive advantage over key producers such as France, Italy and Spain" due to lower tariffs, said Wine Australia, the government's promotional agency for wine. According to the agency in April, annual wine exports into China, Hong Kong and Macau topped A$1 billion for the first time, with exports to the region rising more than 50% on the year.

Tony Battaglene, chief executive of the Australian wine producers' lobby, was also upbeat, saying, "Australia is well-placed to fill demand for wine in China, especially at the premium end of the market."

According to the Australian Trade and Investment Commission, Chinese imports of Australian wine are second only to French vintages. A 2015 trade agreement between China and Australia has progressively lowered tariffs, with high duties on U.S. wine promising a further tail wind.

But it is not all good news for Australia, as the country's pork industry could face trouble.

The U.S. exports more than A$500 million worth of pork to China annually. Higher tariffs could drive U.S. pork from China into Australia, pushing prices down in a blow to domestic pig farmers.

Australian Prime Minister Malcolm Turnbull has repeatedly said, "There are no winners in a trade war," urging an end to U.S.-China trade friction while stressing the importance of free trade.

But political tensions between Australia and China are mounting, with both the ruling Liberal Party and Labor opposition scandalized by donations linked to Beijing. In light of this, early reports from wine industry players note that shipments by some exporters to China have stalled.

In this uncertain climate, Australia may find it difficult to avoid a double-edged sword unless the U.S. and China sort out their trade problems.