WASHINGTON/NEW YORK -- China's central bank chief Yi Gang gave a thumbs up to reporters when he was asked on Thursday morning how the trade talks with the U.S. side were going.

Although he did not answer the question directly, his smile may have suggested that the Chinese side got what they came for.

Shortly before the thumbs up, U.S. President Donald Trump had written on Twitter that "No final deal will be made until my friend President Xi, and I, meet in the near future."

Experts told the Nikkei Asian Review that Beijing's goal was to set a summit between Trump and Chinese President Xi Jinping and have the American leader agree to a relatively loose deal, rather than have U.S. Trade Representative Robert Lighthizer hammer out a detailed agreement that cuts deep into China's structural reforms.

After the two-day cabinet-level talks at the Eisenhower Executive Office Building concluded, Trump invited China's lead negotiator Vice Premier Liu He to the Oval Office and told watching reporters that he would meet with Xi "maybe once and maybe twice." The Wall Street Journal reported that China had proposed a late-February summit on the Chinese resort island of Hainan.

For Beijing, setting up such a meeting could be said to be the greatest triumph of the two-day discussions.

"By agreeing to a summit with Xi, and by saying that March 1 is a hard deadline for the trade talks, Trump has put himself in a weak and compromising negotiation position," said Edward Alden, a senior fellow at the Council on Foreign Relations. "It is now very hard for him to walk away from the summit without an agreement."

Beijing will be looking for "a deal that is long on increasing purchases of American goods but very short on structural reforms," Alden said. For months, Beijing has set its sights on Trump himself. Liu seems to have learned a bitter lesson from talks last May, when he reached agreement with U.S. Treasury Secretary Steven Mnuchin to avoid an increase in tariffs -- only to have Trump slap new duties on Chinese imports shortly thereafter. The vice premier appears to have told people close to him that he learned negotiating with Trump's cabinet was meaningless.

China sent Vice President Wang Qishan to the annual meeting of the World Economic Forum in Davos, Switzerland, last month in hopes of speaking directly with the U.S. president, though Trump ended up sitting out the meetings due to the American government shutdown.

The strategy fits well for the president himself. "Trump is his own U.S. Trade Representative," said Bill Reinsch, the Scholl Chair in International Business at the think tank Center for Strategic and International Studies. "Trump wants to be the center of attention."

Liu praised Trump's "tremendous accomplishment[s]" in office in Thursday remarks through an interpreter. His message that China would expand imports of U.S. soybeans prompted a smiling Trump to ask the vice premier to convey his appreciation to Xi.

Seeing Trump's domestic approval rating souring due to factors including stalled talks on his signature promise of building a wall on the U.S.-Mexico border, the Chinese side has offered him a win with American farmers -- a key support base.

While Trump hailed "tremendous progress" in the trade talks, the two-day talks had little to show for in terms of concrete progress. In respective statements released after the dialogue, the only area where both sides referred to a consensus was on the importance of making any agreement enforceable.

According to the White House, the trade talks center on seven key areas, namely: (1) the ways in which United States companies are pressured to transfer technology to Chinese companies; (2) the need for stronger protection and enforcement of intellectual property rights in China; (3) the numerous tariff and non-tariff barriers faced by U.S. companies in China; (4) the harm resulting from China's cyber-theft of U.S. commercial property; (5) how market-distorting forces, including subsidies and state-owned enterprises, can lead to excess capacity; (6) the need to remove market barriers and tariffs that limit U.S. sales of manufactured goods, services, and agriculture to China; and (7) the role of currencies in the U.S.-China trading relationship.

Of these topics, the most crucial ones are forced technology transfer and market-distorting subsidies, CFR's Alden said. "The U.S. is concerned with China's drive to be a leader in the industries of the future by borrowing or stealing American technology," he said regarding technology transfers.

Meanwhile, the Trump administration would have international support in forcing Beijing to halt government subsidies, Alden added. "Subsidies on items such as steel and solar panels distort global prices, and hurt other countries too," he said.

An agreement that centers on buying more American products, however, would not have similar international backing, Alden said. "If China were to buy more American soybeans, they would reduce purchases from Brazil. It comes at the expense of other countries." 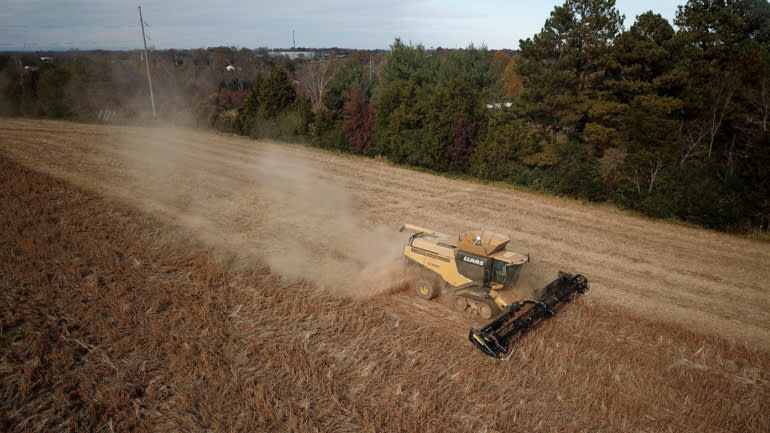 A farmer harvests soybeans in the U.S. state of North Carolina. China offered to expand imports of the crop, a welcome development for a key support base of President Donald Trump.   © Reuters

CSIS' Reinsch said that Lighthizer will try to get details of the agreement written down as much as possible before turning over the negotiations to the two presidents.

The U.S., which sees accountability as key to the process, looks to have considered seeking regular verification that China is keeping to its word and imposing additional tariffs as punishment if it finds enforcement lacking. Mistrust in Beijing runs deep in the White House, as illustrated by trade and economic adviser Peter Navarro last December citing the "long history of China's failure to honor its commitments."

An official from the U.S. Chamber of Commerce briefed on the discussions cited advances in intellectual property protections and market liberalization. The Chinese side, for its part, indicated that it might let American financial institutions take part in its market.

Beijing hopes to leverage warm relations between Trump and Xi into scoring a relatively loose trade deal and dodging demands for difficult structural reforms. This month looks set to deliver a climax in bilateral negotiations that have been buffeted left and right by Trump's whims.

Taisei Hoyama in Washington contributed to this report.