Calls for virus payback against China mount in Washington U.S. President Donald Trump is seen at his desk at the Oval Office of the White House on April 29. The president is once again turning to a harsher stance on China ahead of the November elections.    © Reuters
ALEX FANG and TAKESHI KAWANAMI, Nikkei staff writersMay 2, 2020 05:42 JST | North America
CopyCopied

NEW YORK/WASHINGTON -- Just over a hundred days after the signing of their "phase one" trade deal at the White House, tensions between the U.S. and China have returned to the fore, with President Donald Trump and members of Congress voicing the need for reparations from Beijing over the pandemic.

Trump, who had initially lauded Chinese President Xi Jinping's handling of the new coronavirus, has ratcheted up his rhetoric against the Asian power of late, including the idea of retaliatory tariffs.

Asked by a reporter Thursday whether he would consider "having the United States not pay its debt obligations to China as punishment for the virus," Trump floated duties as an alternative.

"Well, I can do it differently," he replied. "I can do the same thing but even for more money just by putting on tariffs."

Over on Capitol Hill, Republican lawmakers have introduced at least three bills seeking to "hold China accountable" for the pandemic, arguing for the removal of its sovereign immunity to allow legal action against Beijing seeking compensation for harm from the virus -- much like the idea discussed within the Trump administration.

Canceling American debt obligations to China, seeking compensation or imposing new tariffs on Chinese products would all but guarantee a breakdown in bilateral relations and risk pushing the U.S. economy deeper into recession. A full-blown confrontation could also dent American plans to restart its economy, since the U.S. receives 36% of its antibiotics imports from China.

But the political benefits could be irresistible to Trump, especially as he is said to increasingly worry that his handling of the virus is jeopardizing his reelection hopes.

For Beijing, the policy options look a little more complicated.

Michael Hirson, practice head for China and Northeast Asia at Eurasia Group, said that while Beijing will step up rhetorical and diplomatic confrontation with Washington, "the leadership will be wary of undertaking aggressive economic retaliation against U.S. interests out of concern for galvanizing more support for Trump and exacerbating economic and supply chain pressures on China."

"U.S. firms should be wary, however, of semiofficial consumer boycotts -- potentially driven by activist Chinese social media with Beijing turning a blind eye -- if an international investigation [led by the Trump administration] gains momentum," Hirson added.

"It's no secret. There's the old adage: Don't interrupt your enemy when he's making a mistake," said Russel, vice president for international security and diplomacy at the New York-based think tank.

"And they see Trump's alienation of American allies, his kind of obsession with trade numbers, and ignorance of broader economic ... and new technology issues, his vulnerability to flattery, and so on,"  the former Obama administration official said. "You know, they see that as creating an unparalleled opportunity, and admittedly that price they have paid is a lot of headaches -- a lot of tariffs, a lot of economic pressure and so on."

If Trump goes ahead with retaliatory moves, "Xi Jinping will be absolutely compelled to respond and find some way of retaliating," Russel said. 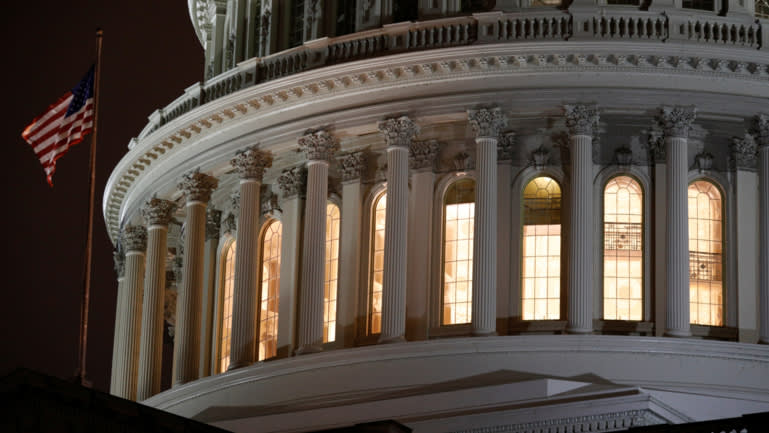 The U.S. Capitol Building in Washington: Republican lawmakers have introduced at least three bills seeking to "hold China accountable" for the global pandemic.

The Trump administration is seeking a wider coalition of countries to support the reparations, diplomatic sources say. Japan and several European countries have been approached by U.S. officials to coordinate with the campaign.

The Republican-sponsored bills in Congress seek to make the Chinese leadership pay for the pandemic, in one way or another.

One, from noted China hawk Sen. Josh Hawley, proposes establishing a task force in the State Department to launch an international investigation into Beijing's handling of COVID-19 and to secure such reparations from Beijing.

Another bill, introduced by Sen. Tom Cotton and Rep. Dan Crenshaw, aims to give the Chinese government a choice: It can come to a comprehensive agreement with the U.S. and "pay for the damage it has caused, or it can face potentially millions of claims in federal court," according to a news release.

The U.S. has confirmed nearly 1.1 million COVID-19 cases and more than 64,000 fatalities, according to Johns Hopkins University's tracker. Its economy is expected to shrink an annualized 40% in the second quarter.

Public opinion is mounting that the White House did not take the coronavirus threat seriously early on. The criticism has put Trump in damage control mode.

In 2016, Trump won in part through promising tariffs on China. Now he appears to be once again taking hawkish positions on the Asian country to turn out his base.

He expressed confidence at Thursday's briefing that the virus was from a lab in the Chinese city of Wuhan, the outbreak's initial epicenter. Asked whether he had seen evidence that it originated at the Wuhan Institute of Virology, Trump said: "Yes, I have."

Surrogates are following his lead.

"On one front, it's about the pandemic. ... The other -- and let's be brutally frank about it -- is this war against the Chinese Communist Party," Bannon said.

But Trump-imposed sanctions on China over the coronavirus risk igniting further global turbulence. The U.S. Chamber of Commerce has asked for anti-China tariffs to be put on hold.

Some of Trump's more moderate advisors, such as Larry Kudlow, director of the National Economic Council, have expressed reservations about retaliatory measures.

"Right now, our efforts here are to, first of all, to continue to get this virus down, open up the economy, get folks back to work ... that's really subject No. 1," Kudlow said in a Friday interview with CNBC, when asked about hitting back at China.

Washington's hard-line rhetoric puts Japan, European countries and other U.S. allies on the spot as they ponder relations with China.

In a teleconference Thursday by Group of Seven finance ministers and central bankers, the American contingent urged Japan and Europe to toughen screening processes for outbound corporate acquisitions by China.

These moves contrast with the path taken during the global financial crisis, when the U.S. lobbied China to convene a gathering of the Group of 20 economies, which quickly coordinated to end the crisis.

"There's certainly no love lost for China among foreign countries, and there are very few illusions about the cover-up that the Chinese Communist Party conducted in the initial weeks," the Asia Society's Russel said.

But Trump's own credibility deficit -- as reflected in his U-turn from praising Xi in January and February to targeting China now -- "makes it hard for other countries, other governments, to feel comfortable sort of signing on to that."