SHANGHAI -- Chinese enterprises have started reworking their fundraising strategies after encountering a less-welcoming environment for public offerings in the U.S.

The Luckin Coffee accounting scandal has reignited calls to step up scrutiny on initial public offerings in the U.S. by Chinese companies.

The U.S. Senate passed a bill on Wednesday that would require foreign companies listing in New York to be subject to oversight by U.S. auditing authorities, which Chinese law forbids. The bill, which has to be passed by the House of Representatives as well to become law, would also require listing candidates to show they are not controlled by a foreign government, also a key issue with Chinese companies.

Earlier this week, the Nasdaq Stock Market revealed plans to tighten listing rules in a way that will restrict Chinese access to the Wall Street bourse.

At the same time, Chinese authorities are encouraging a homecoming to mainland markets by easing restrictions on listings. Some domestic enterprises are switching their playbooks in line with that appeal.

Semiconductor Manufacturing International Corp. revealed plans this month to list on Shanghai's Science and Technology Innovation Board, also known as the STAR Market.

The contract chipmaker seeks to raise 25 billion yuan ($3.52 billion), which will be directed toward next-generation products. SMIC will boost this year's investment 30% to $4.3 billion, according to Co-CEO Zhao Haijun, with the listing covering part of that bill.

SMIC is currently traded solely in Hong Kong, having ended its double-listing on the New York Stock Exchange last year. The decision was made in the midst of U.S. sanctions imposed against Chinese telecommunications equipment suppliers ZTE and Huawei Technologies.

The Politburo under Chinese President Xi Jinping "has started considering how not to be too dependent on the U.S. on the capital front as well," said Zhou Yu, director of international finance at the Shanghai Academy of Social Sciences.

Alibaba Group Holding, which debuted on the New York Stock Exchange in 2014, double-listed in Hong Kong last year. E-commerce giant JD.com and game developer NetEase, both publicly traded in the U.S., are reportedly preparing for a dual listings in Hong Kong as well.

The investor classes in the U.S. and Hong Kong overlap in some ways, but the Asian financial hub offers a way to limit exposure to tighter American restrictions. 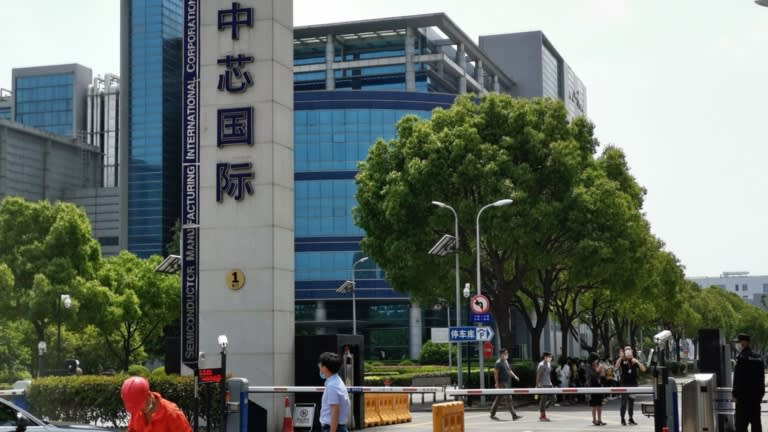 The Nasdaq plan would toughen restrictions on companies applying to list on the exchange. Although its proposals do not explicitly target Chinese enterprises, many foreign companies looking to float on Nasdaq originate from China.

Concerns have been raised in the U.S. over how auditing firms for Chinese companies do not undergo reviews by American authorities. The Luckin scandal adds fuel to those criticisms.

Pressure from the U.S. has eroded the appetite to list across the Pacific. There were only around 10 IPOs by Chinese enterprises in the U.S. through mid-May this year. This compares with the 30 to 40 IPOs seen in 2018 and 2019, although the collapse of the unicorn bubble explains some of the retreat.

Meanwhile, Chinese securities authorities in April loosened rules for public offerings by companies registered overseas but operating on the mainland. For high-tech companies, the minimum market capitalization will be cut to 20 billion yuan from 200 billion yuan, as long as certain conditions are met.

Faced with tightening access to U.S. capital markets, startups will be provided with more options as well. Shenzhen's startup-focused ChiNext board will institute a registration-based IPO system, as opposed to an approval-based process that can take up to two years. The STAR Board, which put the registration system in place when it launched last year, has welcomed over 100 companies to its ranks.

One drawback to listing on the mainland is that funds are raised in yuan instead of the dollar. The Chinese currency is subject to a number of limits on foreign exchange and wiring, especially in periods when the yuan loses value. Without a reliable way of raising dollar-denominated funds, offshore operations will be at risk.