China corporate subsidies swell further in 2019 as US cries foul

Handouts up 15% so far, with Sinopec and carmakers receiving the most An employee pastes a "Made in China" sticker on the box of a smart television, which will be exported to the U.S., at a television factory under Zhaochi Group in Shenzhen.   © Reuters
TAKASHI KAWAKAMI, Nikkei staff writerDecember 17, 2019 03:25 JST | China
CopyCopied

GUANGZHOU -- China has roughly doubled its industrial subsidies since 2013, with further increases expected this year, creating a massive sticking point for the next phase of trade negotiations with the U.S.

The Chinese government doled out 156.2 billion yuan ($22.4 billion) of subsidies in 2018 to companies listed on the Shanghai and Shenzhen stock exchanges, Nikkei has found, based on data from financial research firm Wind.

The tally amounts to about 5% of total net profit earned by mainland China's publicly traded enterprises last year. Subsidies increased 15% on the year for the first nine months of 2019, with more than 90% of the 3,748 businesses included in the calculations receiving something.

Beijing considers such aid vital for protecting domestic industry and jobs. The "phase one" trade deal revealed last week skipped over thorny structural issues, such as subsidies and state-owned enterprises, in favor of lower-hanging fruit.

China Petroleum & Chemical, or Sinopec, topped the recipient list for the January-September period at about $450 million. Guangzhou Automobile Group came in second at around $270 million. 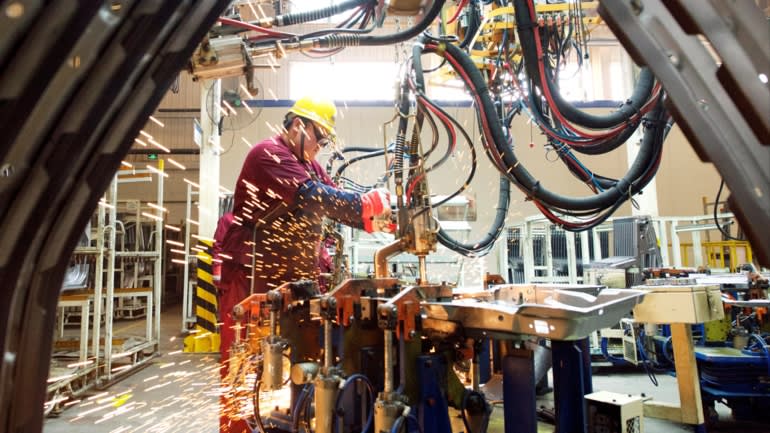 A worker at a factory of JAC Motors in Shandong Province: The state-owned automaker received generous subsidies earlier this year.   © Reuters

Four of the top 10 recipients were automakers, including third-ranked SAIC Motor. In addition to subsidies on electric vehicles, which the Chinese government is actively promoting, many of the payouts were essentially rescue packages to lift struggling companies.

Beijing launched the "Made in China 2025" initiative in 2015 to strengthen the country's advanced industries. It appears to be expanding subsidies to related companies to help them compete on the global stage.

Subsidies and low-interest loans are two main tools China uses to support its industries. The World Trade Organization bans corporate subsidies designed to bolster exports and requires reporting for all other subsidies. But China has reported very little and is believed to be in violation of WTO rules in many cases.

The U.S. has demanded that China scrap these subsidies in order to level the playing field, but Beijing is not budging. "The Communist Party leadership draws its authority from the distribution of wealth, and fundamental change will be difficult," said Shinichi Seki of the Japan Research Institute.

Targets of Washington's sanctions are also receiving support. ZTE, which was essentially barred from receiving American technology exports in 2018, got more than $18 million in the first six months of this year, ostensibly to maintain employment.

Regional governments in China also provide subsidies to help struggling businesses and protect jobs. Midtier automaker JAC Motors received about $55 million -- a third of its net profit for the January-September period -- from August to November. The subsidy was ostensibly to promote the development of environmentally friendly cars.

Such aid keeps otherwise doomed companies trudging along, in turn leading to excess capacity and inefficient management, particularly in heavy industries like steel.