WASHINGTON -- U.S. lawmakers are moving to dramatically widen government oversight of foreign investments with an eye toward keeping advanced technology out of China's hands.

Bipartisan bills proposed in both houses of Congress would subject any foreign investments touching on critical technologies or infrastructure to approval by the Committee on Foreign Investment in the U.S., or CFIUS. This greater scrutiny threatens complications not only for Chinese companies but also for other Asian multinationals seeking to invest in the U.S.

"We must stop troublesome investments by Chinese state-controlled enterprises bent on securing technology that would threaten our national security," Rep. Andy Barr, a Republican from Kentucky, said at a committee meeting Thursday.

Currently, only mergers or acquisitions that would put an American business under foreign control come under that body's purview.

Under the proposed changes, CFIUS would also have authority to review minority investments in American startups developing "critical technology" such as artificial intelligence, as well as the creation of joint ventures that could lead to technology leaks. Purchases of property in sensitive locations, such as near military bases, would also undergo scrutiny.

The legislation proposes tighter screening for deals involving "countries of special concern," which presumably means China and Russia, among others.

"Our strategic competitors have found gaps in the CFIUS process which they're exploiting," Rep. Denny Heck, a Democrat from Washington state, said. These loopholes must be closed "if we want to avoid a catastrophic amount of damage to our technological edge in our military readiness," he added. 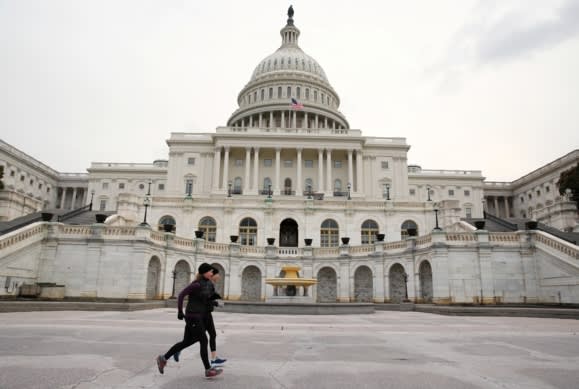 Members of Congress, from both sides of the aisle, are stregnthening opposition to Chinese investment in the U.S.   © Reuters

CFIUS reviews deals for national security risks -- the possibility of technology being put to use by a foreign military, for example -- and recommends that the president block problematic transactions. Five deals have been shut down this way since the committee last had its authority expanded in 1988. President Donald Trump in March blocked Singapore-based communications chipmaker Broadcom's proposed acquisition of America peer Qualcomm on the committee's recommendation.

Lawmakers are working with information technology companies and other parties that would be affected by the proposals to fine-tune them. The legislation is expected to come up for a full debate as soon as May, and a finished bill could be passed and signed into law by summer.

Trump, who has long taken a hard line on trade with China, in March announced tariffs on $50 billion to $60 billion in Chinese goods over alleged intellectual property violations. The U.S. can no longer tolerate China's practice of forcing technology transfers in exchange for market access, said a senior White House official.

But support for tighter scrutiny on Chinese investments in the U.S. is not confined to the administration. Lawmakers in both the Republican and Democratic parties support the legislation.

Concern over Beijing's "Made in China 2025" plan to boost manufacturing self-sufficiency and the prospect of rapid advancements in Chinese civilian and military technology seems to have pushed both parties in Congress to action on CFIUS. The Chinese initiative targets heavy investment in cutting-edge technologies such as industrial robotics and semiconductors.

China already accounts for an outsize portion of the deals CFIUS screens. In 2015, the committee received pre-screening filings on 143 foreign acquisitions, 29 of which involved Chinese buyers. Canada, the next largest country of origin, had 22, followed by the U.K. at 19 and Japan at 12. In 2017, the number of Chinese deals CFIUS screened rose 40% above the 2016 level, according to congressional sources.

Alibaba Group Holding affiliate Ant Financial, the operator of China's Alipay mobile payment service, walked away from a plan to acquire MoneyGram of the U.S. in January after CFIUS objected to the deal. Xcerra, an American maker of chip-testing equipment, withdrew from a planned sale to a fund backed by China's government in anticipation of similar rejection.

Other foreign governments have shown more willingness to do business with China's tech groups. Huawei in February won a contract from Chile to lay more than 20,000km of fiber-optic cable.

While widening CFIUS' reach could block more potentially problematic deals, it would also burden companies that may fall outside "countries of special concern."

The legislation would require parties to certain transactions in need of screening to submit a written declaration to CFIUS before a deal is concluded. Currently, such submissions are voluntary. This administrative burden could make investing in the U.S. a costlier, lengthier process. The number of transactions abandoned during review is already on the rise.