Trump administration to demand 'verifiable and real' results in 90 days 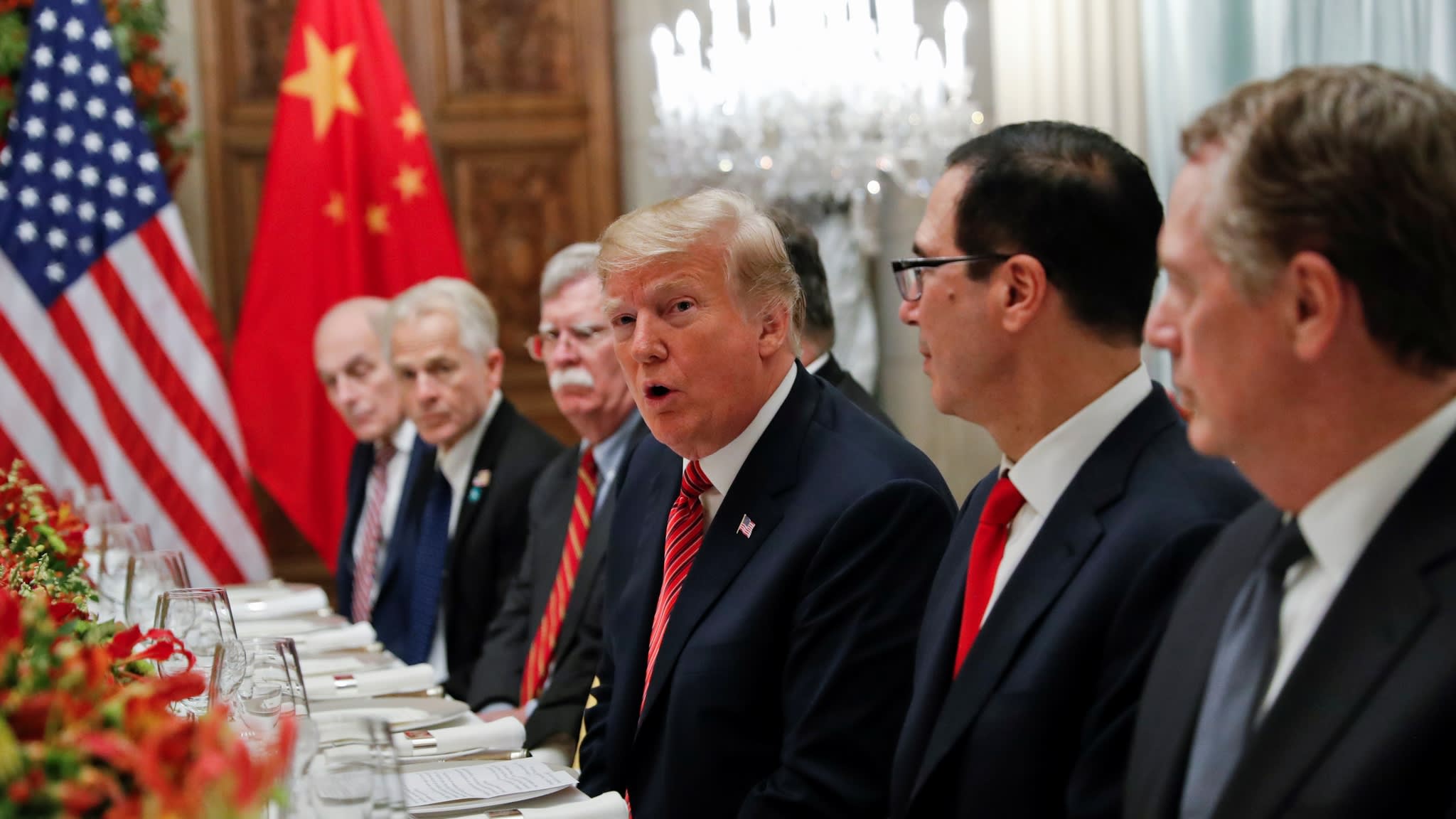 WASHINGTON/BEIJING -- Trump administration officials stepped up their pressure campaign on China on Monday, after the leaders of the two countries agreed to a 90-day cease-fire in the trade war to work on their differences.

Trump tweeted late Sunday that China had agreed to "reduce and remove" tariffs on American cars that it imports. Kudlow said, "We expect those tariffs to go to zero," despite acknowledging that the two sides did not have a specific agreement yet on auto tariffs.

Kudlow also said that U.S. Trade Representative Robert Lighthizer would be leading the next round of trade negotiations. Previously, Treasury Secretary Steven Mnuchin had spearheaded the negotiations, and the shift to the hawkish Lighthizer is seen as signalling a toughening stance.

"There's no one better in the business at looking at ... commitments, delivering timetables, enforcement," Kudlow said.

Trade adviser Peter Navarro, another China hawk, welcomed the appointment. Lighthizer is "the toughest negotiator we've ever had at the USTR. And he's going to go chapter and verse and get tariffs down, nontariff barriers down, and end all these structural practices that prevent market access," Navarro told NPR on Monday. "Talk is cheap," Navarro said. "What we are looking for is not more talk, but by the end of 90 days that we see verifiable and real structural changes that yield actual, verifiable and immediate results."

At Saturday's two and a half-hour dinner, Trump and Chinese President Xi Jinping agreed that Washington would not raise its 10% tariffs on $200 billion worth of Chinese imports to 25% on Jan. 1, as originally planned, according to a White House statement released after their summit in Argentina.

But the tariff increase will take effect if the two sides fail to reach a deal within 90 days on "structural changes with respect to forced technology transfer, intellectual property protection, nontariff barriers, cyber intrusions and cyber theft, services and agriculture," the statement said.

Reducing the bilateral trade imbalance will also be a focus of the negotiations. Mnuchin told news channel CNBC on Monday that China offered to buy an additional $1.2 trillion worth of American goods, including agricultural products, energy and autos. Though details have yet to be negotiated, both Mnuchin and Trump said that agricultural purchases will start immediately.

"Farmers will be a very BIG and FAST beneficiary of our deal with China," Trump tweeted Monday. "They intend to start purchasing agricultural product immediately. We make the finest and cleanest product in the World, and that is what China wants. Farmers, I LOVE YOU!," he wrote.

Washington's demands are steep. The Office of the U.S. Trade Representative and the White House Office of Trade and Manufacturing Policy -- led, respectively, by China hawks Lighthizer and Navarro -- both released extensive reports this year condemning Chinese intellectual property practices.

The reports assert that Beijing has exploited its foreign export restrictions and licensing processes to compel American companies to hand over technology. Electric-vehicle makers, for instance, face steep import tariffs that essentially force them to produce cars in China. Doing so requires establishing joint ventures with local partners, which must hold rights to technologies in key areas such as batteries.

Chinese state-supported cyberattacks against American businesses are a growing concern as well. The Justice Department in October announced charges against 10 people, including Chinese intelligence officers and hackers, who allegedly conspired to steal aviation technology. A USTR report last month cited email-based phishing attacks against Japanese media companies this summer as evidence that Chinese cyberattacks are a global problem.

Washington's repeated demands for Beijing to address these issues have failed to yield progress. If China agrees to discuss issues such as forced technology transfers that it has never openly acknowledged, it could face criticism from not just the U.S., but the broader international community as well.

Whether the private sector will cooperate also remains an open question. Craig Allen, president of the U.S.-China Business Council, said that intellectual property violations are a long-standing, widely shared problem. Yet many companies that cannot afford to ignore the massive Chinese market may find it difficult to protest openly.

Even if the economic friction is resolved, the feud is unlikely to end, given its basis in deep ideological differences between the two superpowers.

In late November, shortly before the Trump-Xi meeting, a U.S. think-tank report made waves in China. The Hoover Institution's 200-page report "Chinese Influence & American Interests: Promoting Constructive Vigilance" delved into the extent of Chinese influence in the U.S. in areas including Congress, state and local governments, academia, the media, the business world and the technology sector.

The report bore a striking resemblance, in its sense of alarm and the range of problems cited, to an October speech by U.S. Vice President Mike Pence. In addition to trade, Pence blasted China over its creation of a surveillance state and its track record on human rights and academic, press and religious freedom.

The Chinese side took particular note of the Hoover Institution report's authors. The list included figures seen as more favorably inclined toward China, such as former U.S. Ambassador to China Winston Lord and Evan Medeiros, who served as senior director for Asian affairs at the National Security Council under Trump's predecessor Barack Obama. This suggests a growing bipartisan inclination among American leaders and experts to take a tougher line on Beijing.