National security fears in Washington spread from telecom to transit

SPRINGFIELD, U.S. -- Elaine Boone sat in a subway car waiting, but not for the train to depart.

The pristine vehicle was suspended several feet above a factory floor in Springfield, Massachusetts, along with many others, destined to serve on Boston's Orange Line.

Boone was waiting for the camera in front of her to start rolling. The small-business owner had come to the Springfield plant of CRRC to give a testimonial on how the Chinese state-owned rolling stock manufacturer, had helped her company -- which supplies fire extinguishers and safety goggles -- grow.

"CRRC has significantly grown our business over the past two years," Boone said. "It's been a very nice business relationship."

CRRC hopes stories like Boone's, part of a larger public relations campaign called "Get the facts," will help it fend off an existential threat.

Washington, which deems CRRC's presence in the U.S. rolling stock market a national security risk, is poised to pass legislation this year to ban Chinese rail and bus manufacturers from receiving federal transit dollars through the same annual defense budget act that in 2018 prohibited Huawei Technologies and ZTE from doing business with the U.S. government. 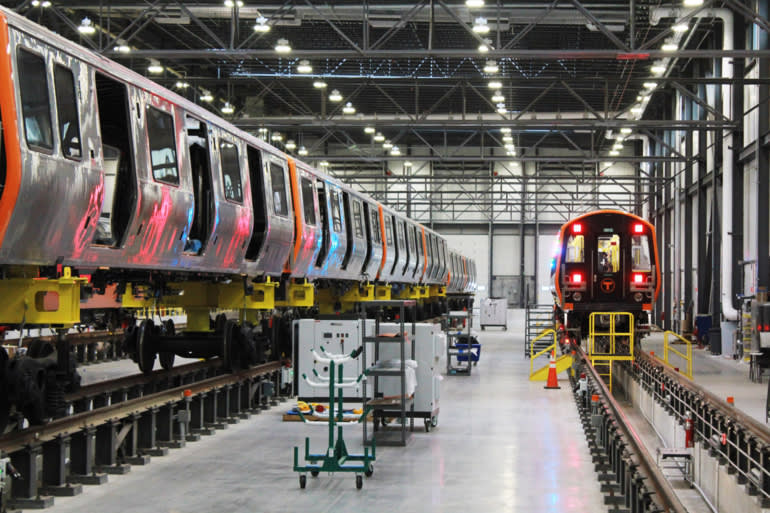 Lawmakers who demanded the provision believe CRRC's expansion in the U.S. is undercutting American industry. Some also fear the Chinese-made trains could be used in cyberwarfare.

The bill, for which the White House has indicated support, would, in effect, bar CRRC from future contracts, without which the Springfield facility will shutter in five to seven years, according to company estimates.

In 2014, CRRC won a $566 million bid to build about 400 new subway cars for the city of Boston, beating out Canada's Bombardier, Japan's Kawasaki Heavy Industries and South Korea's Hyundai Rotem with a competitive bid and a commitment to manufacture the train cars in Massachusetts.

The Boston project marked CRRC's entry into the U.S., which has no passenger train manufacturer of its own. The Chinese company later went on to bag contracts from Philadelphia, Los Angeles and Chicago, where it recently opened another factory. Together, CRRC's contracts in the country add up to $2.6 billion.

Today, CRRC's Massachusetts facility employs some 180 workers, most of them unionized. For Springfield resident Nashira Irvine, a job at the railcar factory was a step up. "Who doesn't want to be a part of building trains?" said the 35-year-old, who joked that someday she would like to stand in the middle of a train on Boston's Orange Line and proclaim to fellow riders, "My crew built this!" CRRC's Springfield facility employs around 180 workers, most of whom are unionized. (Photo by Alex Fang)

CRRC executives do not hide their ambition to keep expanding. "There are three main goals of CRRC: multinational operation, worldwide industrial leadership and a high technical level," Cui Dianguo, then chairman of the group, said in an interview in 2015.

A since-deleted tweet by CRRC may have gone a bit overboard: "So far, 83% of all rail products in the world are operated by #CRRC or are CRRC ones. How long will it take for us conquering the remaining 17%?"

In May 2017, the Rail Security Alliance, a lobbying group representing the U.S. freight industry, sent a letter to the Bureau of Industry and Security, an agency under the Department of Commerce, to call attention to the Chinese rail group's U.S. business.

"China is strategically targeting the U.S. freight rail manufacturing sector, with a first, aggressive step into U.S. transit rail assembly," the group said in the letter.

Many on Capitol Hill came to share the freight industry's concerns, which echo a larger narrative in Sino-American trade friction, where Washington has repeatedly accused of Beijing of unfair state subsidies and espionage.

"China has made clear its intent to dismantle U.S. railcar manufacturing in its 'Made in China 2025' plan. Our economic and national security demands that we address Chinese attempts to dominate industries that build our nation's critical infrastructure," said Democratic Sen. Tammy Baldwin, co-sponsor of the bill that would ban Chinese companies from bidding on rail projects. CRRC's Springfield factory was hailed by local media as the "largest industrial development the city has seen in generations." (Photo by Alex Fang)

"Given what we know about how cyberwarfare works, and recent attacks that have hit transportation and infrastructure hubs across the country, the Department of Commerce must give the green light and thoroughly check any proposals or work China's CRRC does on behalf of the New York subway system, including our signals, Wi-Fi and more," Schumer said in a May statement.

"I would ask them to come and look at the facts, and understand how these vehicles are built, who they are built by, and where the material comes from," said Conti, who joined CRRC from Bombardier. "We build everything to the same specifications as our competitors."

"The software is proprietarily owned by the vendors that provide the equipment," Conti said, explaining that CRRC does not have access to such software, nor the ability to modify it.

But that does not mean a security breach is impossible, said Timothy Heath, a senior defense research analyst at RAND Corp.

"The Chinese have every incentive to [abide by the rules], currently," Heath said. "But I think the concern is if the U.S. and China found themselves in a crisis and relations [were] very bad, the Chinese government... can direct people... to carry out operations for sabotage or intelligence collection.

"Same with Huawei. We don't have evidence that Huawei is doing anything nefarious now, but we know that they are a Chinese company, and there are Chinese laws that obligate Huawei and Chinese rail manufacturers to cooperate with national security officials in any situation, to do any task the government asks," he said.

Amid all the attention CRRC is getting from Washington, workers like Irvine find themselves tuning in to news about their factory more and more.

"It's our livelihood. Of course we've got to worry about it," she said. "We just hope that it gets better, and not all turning to negative."