China's ZTE and Huawei to take big hits from US restrictions New rules proposed on Tuesday would bar U.S. telecommunications companies that receive Federal Communications Commission subsidies from procuring products from foreign companies with security concerns. Targets have yet to be named, but a senior FCC official said Huawei and ZTE are expected to make the list.

The announcement followed Monday's announcement by the Department of Commerce that it would in effect ban American technology exports to ZTE for seven years.

ZTE on Wednesday postponed the release of quarterly earnings, saying it needs time to assess the impact of the U.S. moves.

Huawei and ZTE are headquartered in the southern city of Shenzhen, the "Silicon Valley" of China. The two Chinese industry leaders have been expanding their presence around the world -- another reason for the latest moves by U.S. authorities, who also fear American businesses being overtaken by China in the tech race.

Analysts expect the U.S. measures to have a broad, lasting impact on the two Chinese companies. The pain will be especially acute in the development of fifth-generation, or 5G, high-speed mobile communications technology.

ZTE agreed last year with the Commerce Department on $1.19 billion in penalties for illegally exporting communications equipment to Iran and North Korea from the U.S. between 2010 and 2016. This week's announcement arose from the revelation that ZTE had made false statements on multiple occasions to U.S. authorities after the agreement.

ZTE sources nearly 30% of its components from American companies to produce communications equipment. Especially painful would be a halt to procurement of chips -- the brains of computers -- for which ZTE relies heavily on industry leaders Intel and Qualcomm.

In late February, ZTE announced that it would join hands with Intel and Qualcomm to develop 5G technology. ZTE will also have to review these future projects. 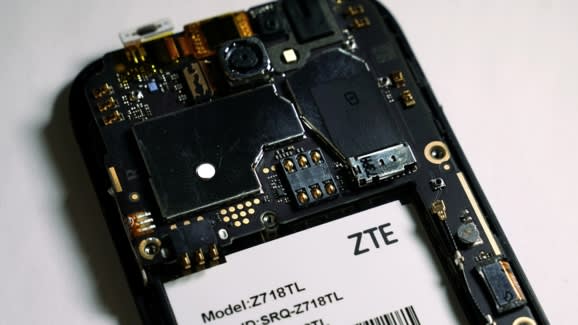 If ZTE is banned from selling communications equipment to American telecom companies, it will likely have to significantly rethink its management strategy. Some 25% of ZTE's total sales come from Europe and the U.S.

The new regulations will hurt Huawei too, but more from a corporate image perspective. Huawei has done particularly well in smartphones in recent years, making the company the world's third-largest smartphone vendor in 2017.

Huawei executives have said that the company aims to displace Apple as No. 2 this year or next, behind top-ranked Samsung Electronics. The new FCC restrictions could prove a headwind against the Chinese company.

The Americas account for less than 10% of Huawei's total revenue.

The U.K. appears to be considering similar restrictions on buying telecom devices made by Huawei and ZTE. Nearly 30% of Huawei's sales come from Europe, the Middle East and Africa. If the U.K. follows the U.S. in banning the Chinese companies' products, it would seriously affect their financial performance and business operations.

The restrictions stem from concern that their communications equipment could be used by the Chinese government to spy on U.S. activities. Huawei is an unlisted private company established by a former People's Liberation Army officer. ZTE is a state-owned enterprise listed in Hong Kong and Shenzhen.

The companies, experts say, have close ties with the Communist Party of China.

The U.S. Congress has urged domestic companies not to use communications equipment from Huawei and ZTE. In 2012, during the presidency of Barack Obama, a House committee recommended that the government and businesses avoid the duo's products. AT&T and other major U.S. telecom companies have shunned Huawei and ZTE.

"Hidden 'back doors' to our networks in routers, switches -- and virtually any other type of telecommunications equipment -- can provide an avenue for hostile governments to inject viruses, launch denial-of-service attacks, steal data, and more," FCC Chairman Ajit Pai said in a statement on March 26.

"If the U.S. continues to act in an arbitrary and reckless manner against the trend of the times, we will be ready in full battle array, fight back immediately and fight to the finish to win the defensive battle for multilateralism and free trade," Chinese Foreign Ministry spokesperson Hua Chunying said during her regular press briefing on Tuesday in response to the U.S. Commerce Department's order on ZTE.

An executive at a Japanese manufacturer of communications devices questioned the wisdom of the American position on Chinese tech companies.

Many industry insiders say the U.S. would be hit hard without low-cost Chinese communications products. The latest restrictions, they say, will particularly affect smaller American companies, which have relied on the cost benefits of Chinese products.

Nevertheless, a hard-line approach would likely gather steam and could spread to other sectors amid U.S. President Donald Trump's anti-Beijing rhetoric and mounting fears of Chinese technological advances.

In a report released last November, a bipartisan advisory body to the U.S. Congress said China's expertise in artificial intelligence and quantum information science is on a par with America's and is better in commercial drones.