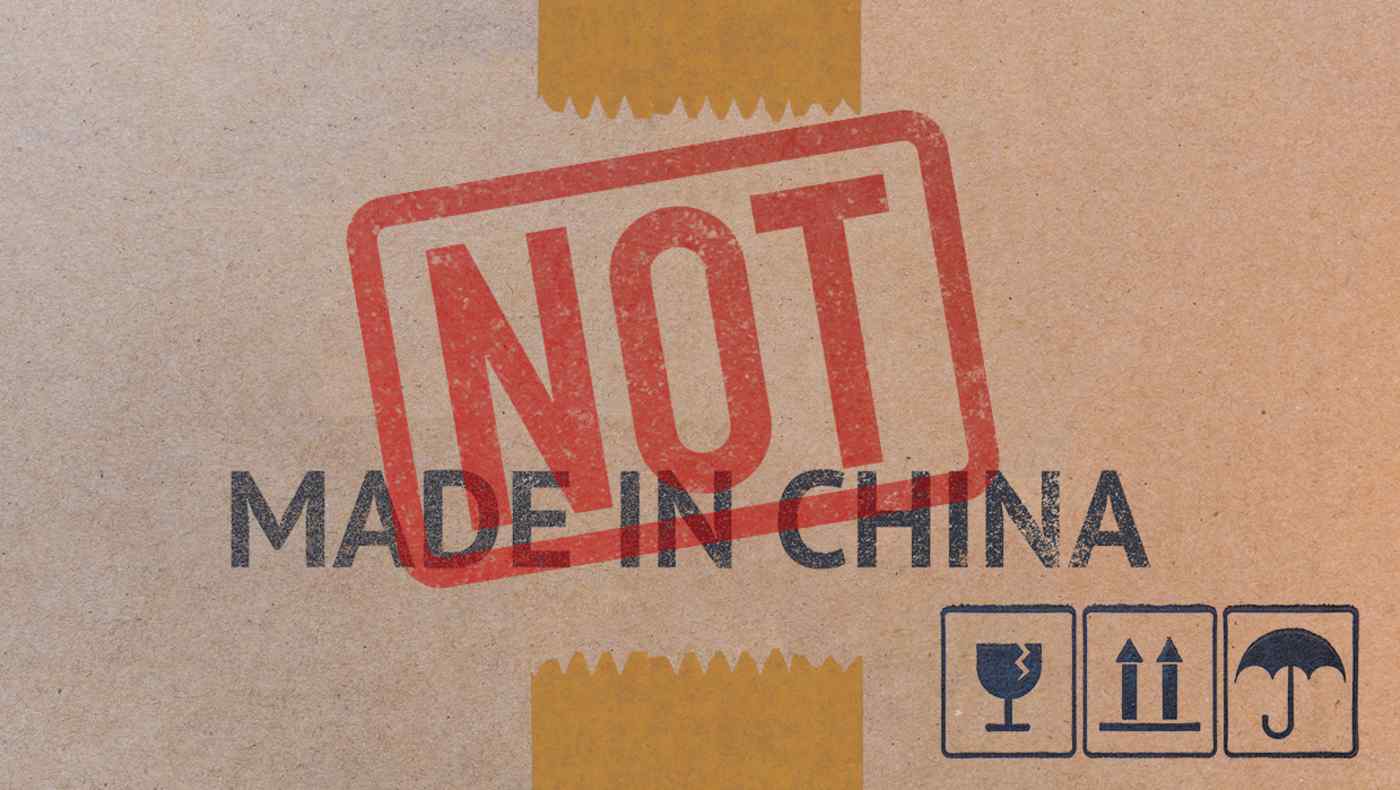 TOKYO/SHANGHAI -- China is racing to keep foreign enterprises in-country, dangling special benefits so that the advantages of staying outweigh the heavy tariffs imposed by the U.S.

A year into the trade war with Washington, more than 50 global companies, including Apple and Nintendo, have announced or are considering plans to move production out of China, Nikkei research has found.

And not just foreign companies. Chinese manufacturers, as well as those from the U.S., Japan and Taiwan, are part of the drain, including makers of personal computers, smartphones and other electronics.

"We need permanent measures to avoid the risk of tariffs and be eligible for U.S. government procurement," said Kiyofumi Kakudo, CEO of PC maker Dynabook. The unit of Sharp is considering a plan to relocate production of its U.S.-bound notebook PCs to a new plant being built in Vietnam. Such PCs account for 10% of the unit's total notebook production.

Dynabook makes almost all its notebook PCs in China, mainly at a plant in Hangzhou, 175 km southwest of Shanghai. "Although the fourth round of U.S. tariffs has been temporarily shelved, we cannot tell what will happen nor when," Kakudo said.

Apple has called on major suppliers to consider moving 15% to 30% of iPhone production out of the country. The Nikkei Asian Review reported on July 17 that Apple is about to start trial production of its popular AirPods wireless earbuds in Vietnam. Trials such as these are usually precursors to mass production.

American PC makers HP and Dell are thinking of moving up to 30% of their notebook production in China to Southeast Asia and elsewhere. Japan's Nintendo will also shift a portion of its Nintendo Switch game system production from China to Vietnam.

There is concern that these moves could squeeze Chinese employment and consumption. To minimize the blow, Beijing is rolling out the red carpet for foreign businesses.

Tesla is at the forefront of such government efforts. The company is now moving equipment into its new plant on the outskirts of Shanghai, on which it broke ground just half a year ago. It is hiring workers to staff its lines starting as early as next month.

The American electric-car maker is believed to have secured the land at a discount from the local government and likely received lending on the cheap as well.

China has been gradually opening up to overseas businesses since 2018, when trade tensions with the U.S. deepened. Foreign direct investment into China increased 3.5% on the year to about $70.7 billion for the January-June half, according to its Commerce Ministry.

The country announced in late June that it would ease restrictions on foreign investment in seven fields, including oil and gas. It is also working to bring forward plans for opening up the financial sector.

Whether these are enough to offset the impact of the trade war is unclear.

At UE Furniture's main factory, about 200 km west of Shanghai, employees start to file out of the building around 4:30 p.m.

"We no longer work overtime because of the tariffs," one employee said, echoing similar statements by others. The company has decided to set up production facilities in Vietnam to avoid American tariffs. It appears not to have cut staff at home so far, but many employees face shrinking earnings from shorter hours. 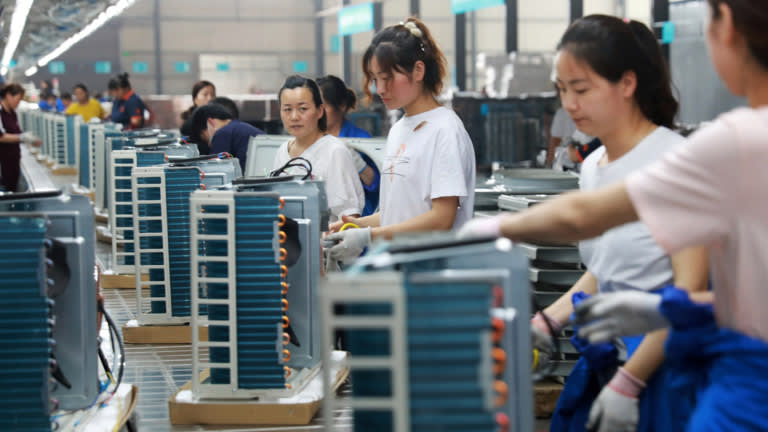 Women work on a production line manufacturing air conditioners, at a factory of an electrical engineering company in Huaibei, Anhui province. Many companies may be forced to set up dual supply chains: one for China and one for other markets.   © Reuters

Concern over the situation is growing among political leaders. China's State Council decided in May to set up a group to lead employment measures and plans to bolster job training programs using surplus funds from state insurance schemes.

The trade dispute is beginning to show up in flows of goods and capital. In the first five months of the year, exports from China to the U.S. fell 12% on the year in value terms, while those from India, Vietnam and Taiwan logged double-digit gains. Exports aimed at bypassing U.S. tariffs by disguising the origin of products may also be increasing.

Many companies, alarmed by the prospect of a prolonged trade conflict, are hedging their bets. While looking for alternative production sites for U.S.-bound goods, many will keep factories operating in China for the domestic Chinese market. Thus, many manufacturers will be forced to set up dual supply chains: one for China and one for other markets, raising their costs and denting profits.

"The possibility of the world market dividing into China and non-China is growing," said Yuji Miura, a senior economist at the Japan Research Institute. "Decoupling" -- that is an unwinding of economic ties between the U.S. and China and a division of the world economy into hostile blocs -- is a real possibility.

Other than higher costs, companies will likely face excess capacity in a decoupled world economy.

Quanta Computer, a Taiwanese contract manufacturer of PCs, including Apple's MacBook, is set to shift some operations to Taiwan. But negotiations with client companies over the cost of relocation are expected to be difficult. Quanta cannot afford a further decline in its already low profit margins, according to CEO Barry Lam.

A Japanese machinery maker has shifted production for the U.S. market to a Southeast Asian country. Because the new location does not have as extensive a supply chain as in China, an executive said: "We need to either transport parts from China or to establish a new procurement network. In either case, costs will rise." 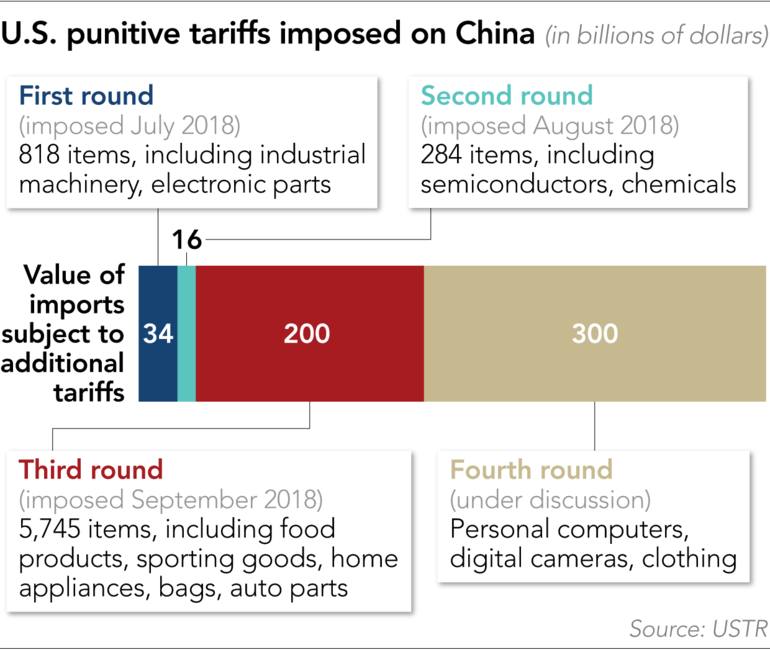 Since last July, the U.S. government has imposed three rounds of new tariffs on Chinese imports, covering 27 trillion yen ($250 billion) worth of goods. Although the fourth round covering virtually all goods shipped from China is on hold, companies need to prepare for the worst.

Much of the shift is to Southeast Asia, especially Vietnam, which is becoming home to many manufacturers of electrical and electronic equipment. Among them is South Korea's Samsung Electronics, which makes smartphones in the country. Vietnam also offers logistic advantages because it shares a land border with China.

Japan's Kyocera is thinking of transferring printer production to Vietnam. Chinese electronics maker TCL will set up a TV plant in the country.

Manufacturers are also moving production back home to take advantage of existing procurement networks for exports aimed at large, developed-country markets. Komatsu has partially shifted output of parts for construction equipment to Japan and the U.S. Companies are also working to raise productivity at their plants by promoting digitization and automation.