Chinese chip industry is worried not just that the trade battle could hit demand but also concerned that the Chinese government could retaliate on the U.S. with limits on American imports.   © Reuters
CHENG TING-FANG, Nikkei staff writerSeptember 17, 2018 20:52 JST | China
CopyCopied

WUXI, China -- Yao Lijun knows how important it is for China to break the dominance of U.S. and Japanese companies in making materials for chip production. "Otherwise, other countries could easily seize us by our throats and cut the lifeline anytime," said the chairman of Konfoong Materials International, one of China's largest suppliers to the chip industry.

Konfoong Materials (KFMI) is China's largest maker of ultrapure titanium, copper and several chipmaking materials. When Yao Lijun founded the company in 2005, he says he had already realized the importance of developing self-sufficiency in semiconductors. Yet few of China's business leaders or government officials shared his vision.

That has changed since the mounting trade war with the U.S., which could escalate even further in the coming days with a new wave of tariffs.

"The whole industry has finally learned a hard lesson and recognizes that we have to develop everything, literally everything, including chip materials that were relatively unpopular but crucial on our own," said Yao at last week's Integrated Circuit Industry Development Seminar, one of the Chinese chip industry's most important annual gatherings. Relying on the global industry may no longer be sustainable, he added.

Yao's remarks underscore the increasing concern in China's burgeoning chip industry that, in addition to new tariffs, President Donald Trump's administration could soon step up controls to prevent the export of crucial semiconductor tools and materials to China.

Although it is still uncertain whether the U.S. will move ahead with export controls, many tech companies are playing it safe by looking for non U.S. suppliers to avoid further trade war risk. Nikkei Asian Review reported earlier this year that many Chinese tech companies such as Huawei, Haier, Media Group, BYD, and others have already quietly shifted some chip orders outside of the U.S.

Chinese chip manufacturers are also looking beyond American providers, according to industry executives.

"Chinese chipmakers have started to talk to Japanese and European equipment and material vendors and others to initiate a contingency plan," Yang Wenge, vice president of marketing strategy at Entegris, a U.S. chip material builder told the Nikkei Asian Review. The chip industry is worried not just that the trade battle could hit demand. They are also concerned that the Chinese government could retaliate on the U.S. with limits on American imports. 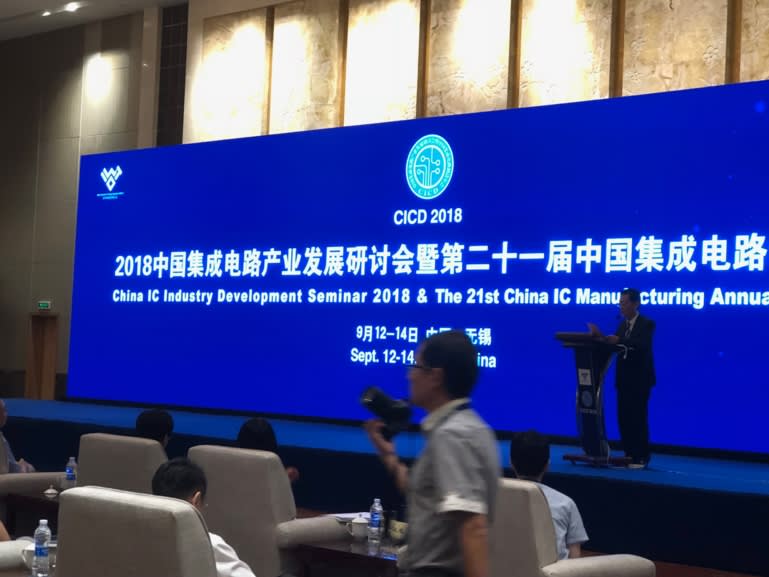 Some 1,000 chip industry executives gathered in the Chinese city of Wuxi for an annual semiconductor forum while many of them worried about risks of an escalating trade battle.

Restrictions on U.S. exports of equipment and materials would deal a severe blow to China's ambitions to build a domestic semiconductor industry. It could cause massive delays in chip factories currently under construction in China including the country's first advanced memory project Yangtze Memory Technologies. New controls could also hinder expansion by Semiconductor Manufacturing International Co., the nation's top contract chipmaker, while many global players such as Samsung, SK Hynix, TSMC, and Intel are also expanding production sites in the country.

The prospect of a U.S. crackdown has sparked calls for action to accelerate the development of a Chinese supply chain.

"We know we are lagging far behind... and we realize the cutthroat danger," said Ye Tianchun, Director of the Institute of Microelectronics at the Chinese Academy of Science, the country's top research agency. "We know we have to be self-reliant and develop an industry over which we have control. I urge domestic chip manufacturers to strongly support emerging local equipment and material suppliers."

Chip tools and materials are essential enablers for manufacturing semiconductors, yet China-based companies account for less than 1% of the global market, according to industry association, SEMI. While China has developed competitive chip designers such as Huawei's chip unit Hisilicon Technologies and leading chip testing and packaging house Jiangsu Changjiang Electronics Technology, it still struggles to create its own versions of Applied Material, Lam Research, KLA-Tencor, and Dow Chemical -- the world's top equipment, materials and chemicals suppliers to the chip industry.

The challenge has been to build expertise through years of basic science research, while it also takes years to pass durability and quality tests, says an official at China's Ministry of Science and Technology. As a result, China's chip makers and designers have been heavily reliant on foreign suppliers and they are now vulnerable, she says.

"We really face serious threats and risks brought by the escalating trade war," Chiu Kang, deputy supervisor at China's Major National Science and Technology Project, a program focused on developing the sector. "Most of the chipmakers we talk to hope to find domestic suppliers as soon as possible to replace foreign ones."

Nevertheless there are those who see some upside in the fallout from the U.S. administration's crackdown on tech exports to China. It could help to accelerate the government's ambitions to develop self-sufficiency say some in the industry.

In 2014 Beijing launched a 137.8 billion yuan ($20.1bn) fund to invest in the sector, with the aim of encouraging further investment from local government and private capital. The China Integrated Circuit Industry Investment Fund has so far and financed about 50 companies involved in manufacturing, design, testing, packaging and equipment, and materials. The so-called "Big IC fund" has supported local equipment and material makers such as Naura Technology Group and Anji Microelectronics, China's answer to Applied Materials and Dow Chemical. However, this sector accounts for just 8% of the funding and more needs to be done.

This year Premier Le Keqiang made the chip industry a national priority and the second stage of funding is expected to reach more than 200 billion yuan. Ding Wenwu, head of the big IC fund says the new funding could be used to develop advanced chip technology such as 3D NAND flash memory, core processors and field-programmable gate-array [FPGA] chips, a type of high-end programmable chip. He also stressed that building a Chinese supply chain of equipment and materials was crucial too.

"We still see a massive gap with global rivals," Ding said last week at the conference. "But the [Washington-Beijing] trade frictions are not necessarily bad for us... At least all of us from the government, business leaders, to ordinary people have reached a consensus that it is important to form a local chip ecosystem as soon as possible."