China to ignore US demand for Iran oil ban BEIJING/WASHINGTON -- China looks set to defy U.S. calls to halt imports of Iranian oil by November, potentially adding another source of friction to the already fractious trade relationship between Washington and Beijing.

The U.S., which withdrew last month from the 2015 Iran nuclear deal, has pressed countries around the world to cut oil imports from the Middle Eastern country to "zero" by Nov. 4 or face sanctions.

Measures taking effect in November will ban purchases of Iranian oil and transactions with the Central Bank of Iran, which handles oil payments. Financial institutions that violate the sanctions will lose access to dollar-based payment systems, hampering their ability to do business internationally.

China, the top importer of oil from Iran, however, has shown no signs of complying.

"China and Iran are friendly countries to each other," the Foreign Ministry's Lu Kang told reporters Wednesday. "We maintain normal exchanges and cooperation on the basis of conforming to our obligations under the international law, including in the fields of economy, trade and energy. This is beyond reproach." 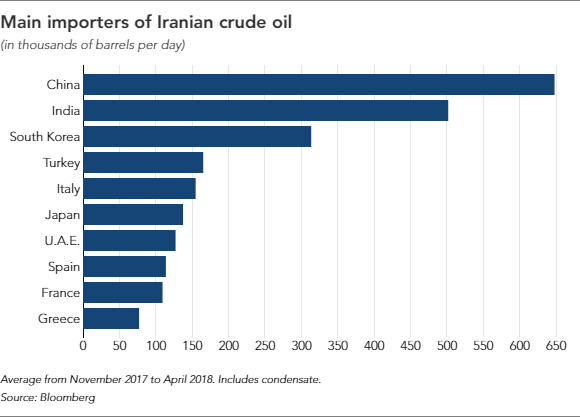 Iranian President Hassan Rouhani attended this month's Shanghai Cooperation Organization summit in China's Shandong Province as an observer at Beijing's invitation. He met there with Chinese President Xi Jinping, who pledged to expand economic cooperation between the two countries. China is among the parties to the nuclear deal.

Washington's use of the dollar as a weapon may not do much harm to Beijing. China in March launched yuan-denominated oil futures to promote the currency's use in a market dominated by the greenback. Iran reportedly also accepted yuan payments from China for oil under similar sanctions in 2012.

Cut off from other export markets, Iran may sell crude for cheap to China, further exacerbating tensions between Washington and Beijing.

Japan also cannot acquiesce too readily to the U.S. demands, as it has maintained diplomatic relations with Iran to secure a stable oil supply. But it buys less of its oil from the Middle Eastern country than it once did -- now accounting for about 5.5% of its imports -- and some in Tokyo argue that a temporary halt would have a limited impact.

"We plan to hold discussions with relevant countries, including the U.S., to ensure that Japanese companies are not adversely affected," Chief Cabinet Secretary Yoshihide Suga told reporters Wednesday. Tokyo supports the nuclear deal, but also understands the problems that led Trump to pull out of the agreement, he said.

The European Union will press the U.S. to exempt European companies from the sanctions, an EU source familiar with the situation said. Brussels is also preparing to revive a so-called blocking statute that bars EU businesses from complying with sanctions imposed abroad by a third party. The EU seeks to maintain the nuclear agreement, to which Britain, France and Germany are signatories.

Washington's effort to use the dollar to force other countries to fall in line may ultimately backfire by encouraging a switch to other currencies. India, another major importer of Iranian oil, paid for it in rupees under the 2012 sanctions.