Xi takes a jab at Trump's 'law of the jungle' practices

SHANGHAI -- After a year of preparation, Chinese President Xi Jinping hosted the first China International Import Expo here on Monday, vowing to import $40 trillion worth of goods and services over the next 15 years.

The Chinese leadership had flagged the expo as one of the most important diplomatic events of the year, and the figures were staggering. Attending were 3,600 companies from 172 countries and regions, with 400,000 buyers expected to attend by Saturday.

But while China flaunted its buying power and was eager to show the world that it was ready to rebalance the country's export-heavy economy, Xi stopped short of proposing the types of new initiatives that may have quelled the trade war with the U.S.

"China's door will never be closed. It will only open still wider," Xi said in his keynote speech. The hosting of the expo is "a concrete action by China to advance an open world economy and support economic globalization," he said.

Held in Shanghai, where Xi served as Communist Party chief before ascending to the leadership, the expo was aimed to serve as a counterweight to U.S. President Donald Trump's harsh criticism of China's trade surplus with the U.S., the rationale for the ongoing trade war.

By waving the banner of free trade, Xi aims to win friends among other countries that have taken issue with American unilateralism and protectionism. To this end, China named 12 countries including Canada, Brazil, Germany, Russia and the U.K. as guests of honor, giving each their own pavilion.

"In the coming 15 years, China's imports of goods and services are expected to exceed $30 trillion and $10 trillion, respectively," Xi said. 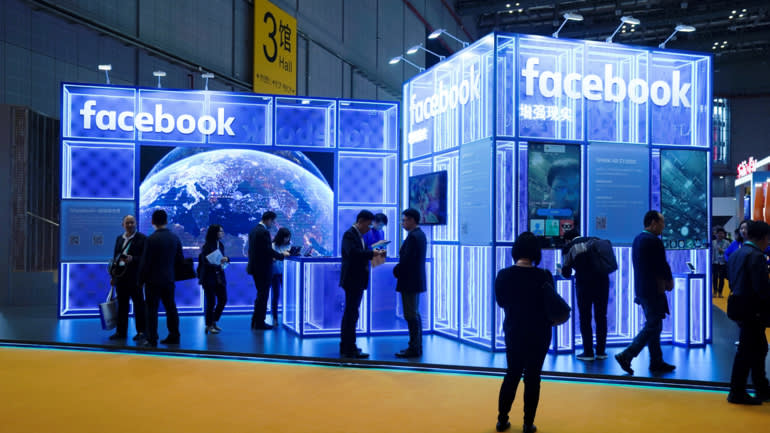 Facebook's booth at the China International Import Expo in Shanghai on Nov. 5.   © Reuters

Though these promises appear grand, they seem easily attainable for Asia's largest economy. Imports of goods reached an all-time high of $1.95 trillion in 2014, and services hit a record $470 billion last year. From those starting points, goods would reach $30 trillion by remaining at 2014 levels, while services would meet the $10 trillion goal on greater tourism and patent fees.

But Xi's pledge comes as China's economy grew at its weakest pace in nine and a half years during the July-September quarter. Though imports from January to September jumped 20% on the year, rising prices for products like oil inflated the figure as volume increased little. Car imports, an area in which tariffs were lowered in July, rose by value but fell in terms of volume.

Imports have been dampened by a slowdown in infrastructure investment and consumer spending, as well as a weak yuan.

"When you talk about the future of the Chinese economy, you have every reason to be confident," Xi said, looking to ease concerns about slower growth in the country.

This was the first time for the president to give a speech about the economy or trade since the Boao Forum for Asia in April. It is unusual for Xi to discuss the state of China's economy in detail, including statistics, a task normally delegated to Premier Li Keqiang.

Xi's proposals for opening markets also lacked punch this time. The Boao Forum saw much interest in his announcement that China would ease foreign ownership restrictions in the financial and auto industries.

But on Monday, he discussed only medical services and education. While the likes of Facebook and Google took part in the exhibition, Xi avoided mentioning rapidly growing internet industries.

In talks with Washington, Beijing has offered to import more American agricultural and energy products, but the trade war drags on. Xi delivered criticism of the U.S. without mentioning the country by name as he hunkers down for a prolonged conflict.

"In a world of deepening economic globalization, practices of the law of the jungle and winner-takes-all only represent a dead end," Xi said.

He expressed confidence that China would withstand the trade war.

The Trump administration has made many demands of China, some of which will be hard for Beijing to swallow, such as an end to its "Made in China 2025" strategy aimed at achieving dominance in high-tech fields. Even if China's plan to expand imports eases tensions, several other issues cannot be solved easily in the short run.