China turns to Africa to mitigate impact of US trade war

Beijing summit ends with promise of cooperation on business and security BEIJING/CAIRO -- China is seeking to further expand trade with Africa as a way to reduce risk from the U.S. trade dispute, a strategy made clear at a two-day summit ended Tuesday in Beijing.

At the Forum on China-Africa Cooperation, the two sides adopted a joint statement and a three-year action plan, laying out plans to deepen cooperation in various fields.

The leaders from both sides have "reached significant common ground and spoken with one voice on all major issues," Chinese President Xi Jinping told reporters at the closing of the event.

During Tuesday's session, Xi also stressed the importance of opposing protectionism and supporting free trade, an implicit reference to the go-it-alone attitude of the administration of U.S. President Donald Trump. Xi called on African leaders to work together for both sides to develop and prosper together.

For China, Africa's biggest trading partner, the value of trade with the continent for the January-July period grew 20% year-on-year, with imports jumping 30% to $56.8 billion and exports to Africa climbing 10% to $59.3 billion.

China imported more crude oil from Angola and other countries in an apparent effort to compensate for declining imports of natural gas from the U.S. amid the two powers' mutual hiking of tariffs, as well as Washington's move to impose sanctions on Iranian crude oil. 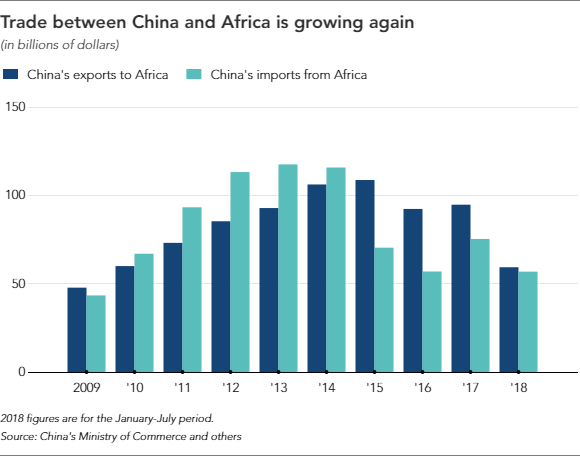 China is trying to avoid relying on the Middle East and the U.S., so its proportion of oil sourced from Africa could reach as high as 30%, said an executive at an energy company.

The growth in China's exports to Africa was driven by several factors, including the increasing difficulty of selling to the U.S., as well as expanded exports of solar power equipment. China shipped more automobiles and auto parts to African countries as well.

For China, aside from securing crude oil and other resources, building ties with Africa presents an opportunity to reach the continent's combined market of over 1.2 billion potential consumers. But for some African countries, China makes an appealing partner because it does not withhold support due to concerns over democracy or human-rights issues, as do some Western countries. Tuesday's joint statement reaffirmed China's intent to offer Africa aid "with no political strings attached."

Beijing continues to pour money into Africa, with foreign direct investment totaling about $40 billion cumulatively -- close to America's leading figure of $57 billion. With the U.S. and Europe growing hesitant to make infrastructure loans to Africa, China's more proactive lending has made it an even more valuable partner.

But some voices have expressed wariness of Africa becoming too reliant on China. The eastern African country of Djibouti, which hosts a Chinese military base, has been called overly dependent on Chinese loans. The managing director of the International Monetary Fund, Christine Lagarde, said in April that China's infrastructure ventures abroad as part of its Belt and Road initiative can "lead to a problematic increase in debt, potentially limiting other spending as debt service rises."

China tripled its offerings of grants and interest-free loans to Africa as Xi sought to dispel fears that borrowers would fall into so-called "debt traps" -- as was the case with Sri Lanka, which was forced to hand Beijing control of a key port last year. Such assistance comprised $15 billion, or about a quarter of a $60 billion aid package Xi pledged to the continent on Monday, compared to $5 billion in another package of the same value China offered three years ago.