Officials suggest cutting off supplies to US, which relies on Beijing for 80% of imports

WASHINGTON/BEIJING -- Chinese officials are dangling the possibility of banning exports of rare-earth metals to the U.S. as trade tensions mount, exploiting American dependence on China for materials that play a crucial role in modern technology.

"If anyone wants to use the products made from our rare earth exports to try to counter China’s development... the people of China will not be happy," a representative of the powerful National Development and Reform Commission, the country's planning agency, said in a statement Tuesday, alluding to the possibility of cutting off rare-earth supplies.

Asked about this the following day, Foreign Ministry spokesperson Lu Kang said only that "remarks made by NDRC officials certainly are a voice of authority."

A commentary dated Wednesday in the People's Daily newspaper, a Communist Party mouthpiece, underscored the point. "If anyone wants to use imported rare earths against China, the Chinese people will not agree," it echoed.

Speculation that Beijing could use rare-earth metals as a bargaining chip in retaliation for American pressure on its tech industry has swirled since Washington this month essentially banned American companies from selling to Huawei Technologies. Rare earths are used in applications ranging from magnets, lasers and superconductors to camera lenses and cancer treatments, but are difficult to produce and process into a useful form. 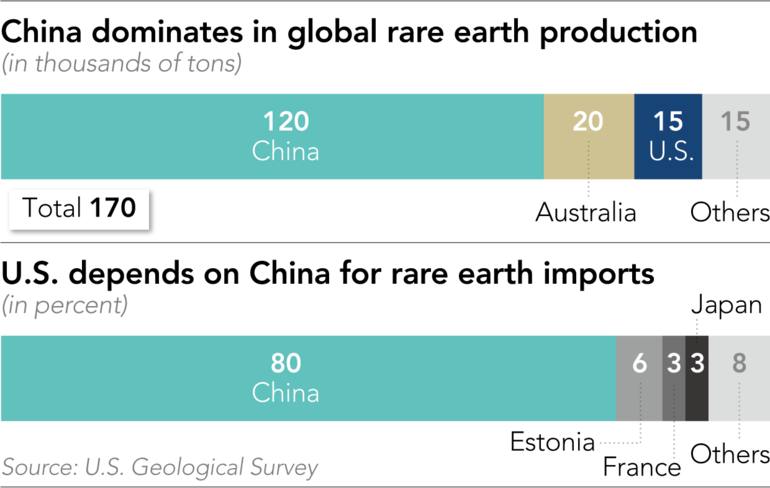 On May 20, shortly after news of the Huawei blacklisting emerged, Chinese President Xi Jinping visited a magnet maker in Ganzhou, Jiangxi Province, an area rich in rare-earth deposits. He was accompanied by Vice Premier Liu He, China's chief negotiator in trade talks with the U.S.

Rare-earth metals are an "important strategic resource," Xi said. "We must work ceaselessly to raise our technology level."

China accounted for about 70% of the 170,000 tons of rare earths mined last year, with Australia and the U.S. in distant second and third, according to data from the U.S. Geological Survey.

China supplies 80% of the rare-earth metals and compounds imported by the U.S. The share is even higher for certain materials, climbing as high as 96% for cerium, which is used as a glass polish and in automotive exhaust catalysts. The U.S. has spared rare earths from its punitive tariffs on Chinese imports, including a proposed fourth round that would cover nearly all goods not yet affected.

Deng Xiaoping, the former Chinese leader who was a driving force behind the country's economic growth and reform, recognized the minerals' strategic importance early on, likening their significance to oil in the Middle East. China has built processing and production facilities to turn the raw ore into useful intermediate and final products. 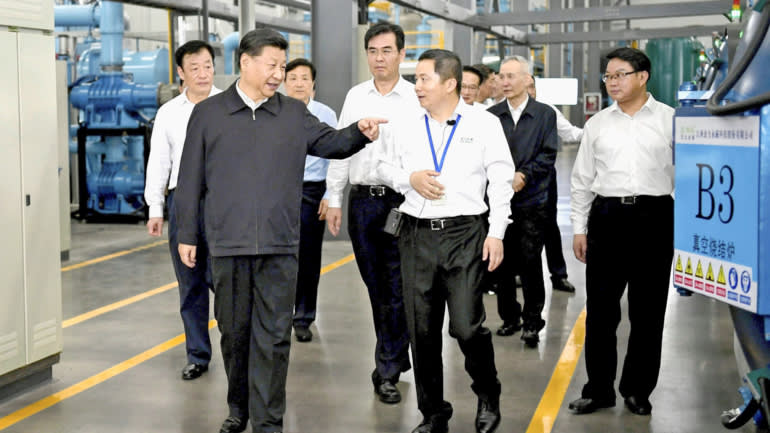 The country throttled shipments of rare earths to Japan in 2010 amid rising tensions over the Senkaku Islands, which are administered by Tokyo and claimed by Beijing as the Diaoyu. This precedent has made market watchers sensitive to the possibility of a ban. The price of dysprosium, used to improve the heat resistance of magnets for electric-vehicle motors, has jumped 60% this year to about $280 per kilogram amid speculative buying.

The prospect of higher prices has bolstered the shares of rare-earth miners both within and outside China. China Rare Earth Holdings closed up 24% on Wednesday, and JL Mag Rare-Earth, operator of the plant Xi visited last week, climbed 10%. Australian miner Lynas, one of the few non-Chinese suppliers of rare earths, advanced 15%.

In Japan, Asaka Riken, which recovers valuable metals from waste, ended the day limit-up with a 22% gain, as the benchmark Nikkei Stock Average sank more than 250 points.

But a return of export quotas could prove costly to China. Yuji Tanamachi, head of Tokyo-based metals market research company IRuniverse, considers it unlikely that Beijing will go that far, arguing that "the damage to China itself over the medium to long term would be significant."

The 2010 restrictions raised questions about the reliability of Japan's rare-earth supply and spurred the country to find other sources and develop technologies that made the minerals unnecessary. Losing access to the U.S. market would deal a heavy blow to Chinese manufacturers further down the supply chain.

Quotas could also undermine China's argument that the U.S. tariffs violate World Trade Organization rules. The WTO ruled against Beijing in 2014 in a case brought by the U.S., Europe and Japan over Chinese rare-earth export restrictions.

Issaku Harada in Beijing and Hiroki Masuda in Tokyo contributed to this report.