HONG KONG -- As the rivalry between the U.S. and China over trade and technology deepens, the Trump administration is tightening rules on visas for Chinese students in high-tech fields such as aeronautical engineering and robotics.

Whereas students specializing in science and technology could once look forward to a five-year visa, last June the period of study was shortened to just one year. And it has become increasingly difficult for students to get a visa at all if they are concentrating on areas such as biomedicine that are part of Beijing's "Made in China 2025" plan.

Wang, a 25-year-old student pursuing a doctorate in biomedical science in the U.S., is worried he may not be able to finish his five-year program. He is in his second year in the U.S., but has to renew his visa annually. "Visa policies have changed drastically here. I cannot predict what will happen in the future," Wang said.

A growing number of Chinese students are in similar circumstances. Many face delays with visa approvals, or are granted only short terms of study, according to China's Ministry of Education. More than 10% of students sponsored by the government -- 182 out of 1,353 who had planned to study in the U.S. in the January to March quarter -- were unable to travel to the U.S. due to visa problems.

Earlier this month the ministry issued an advisory to students who wish to study in the U.S. to carefully assess the risks before departing. Some have opted for Australia or other countries as a result of the U.S. visa clampdown, according to a Chinese company that assists people looking to study abroad.

Hu Xijin, editor-in-chief of Global Times, a state-run English-language tabloid, said the policy discriminates against Chinese students and is likely connected to the trade row. The Financial Times reported in October last year that White House hawks had considered a complete ban on student visas for Chinese nationals.

One Chinese social media site recently reported that no Chinese students were accepted under the Massachusetts Institute of Technology's early admission program this year, but China's Education Ministry denied that, saying some students had received letters of acceptance under different categories. Nevertheless, the report sent shock waves through the education industry in both the U.S. and China.

The intensifying trade dispute and MIT's decision are "no coincidence," said Rocky Tuan, president of the Chinese University of Hong Kong, who lived in the U.S. for more than four decades. Tuan said his university has not been directly affected, but added that the "situation might worsen in the future." 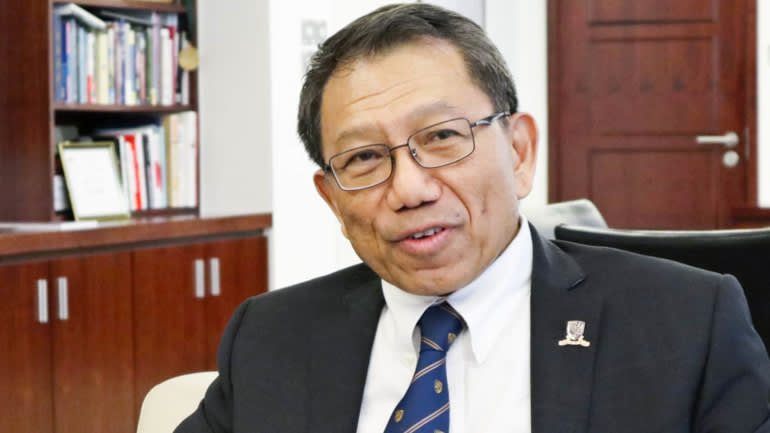 Rocky Tuan, president of the Chinese University of Hong Kong, said his institution is an alternative destination for top-notch Chinese students who find getting a visa for the U.S. harder.

For its part, Chinese University of Hong Kong hopes to attract students who have been caught up in the U.S.-China trade spat. "CUHK can serve as an alternative for prospective students, particularly top performers on China's university admission exams, who could not get into U.S. universities due to stupid politics," Tuan said.

The university is one of the territory's best, having produced Nobel laureates. It placed seventh in the Times Higher Education Asia University Rankings 2019, one notch above the University of Tokyo.

Students enrolled in one of the university's nine colleges live in dormitories and study on a vast campus. Tuan expects the share of mainland Chinese undergraduates to eventually rise to 12% from around 10% now.

Chinese University of Hong Kong has built a research facility in neighboring Shenzhen to conduct research with financial support from the Chinese government. In addition to the Shenzhen campus, which it built in 2012, the university has opened an "innovation hub" that helps graduates and graduate students start businesses.

It also plans to open a medical school in Shenzhen. "Shenzhen is ideal for applying science, as a manufacturing powerhouse," said Tuan. The curriculum will be the same as in Hong Kong, and classes will be conducted in English. The university wants to attract faculty and staff from around the world, Tuan said.

Chinese students shut out of U.S. universities for fear of China's growing influence will no doubt find places elsewhere. But no one is likely to benefit from an interruption of intellectual exchange between American and Chinese students.