Factory rents in Vietnam surge on rising demand for space HONG KONG -- Toymakers are stepping up efforts to diversify beyond China to combat rising costs and the looming possibility that the U.S., the industry's biggest buyer, will impose punishing tariffs on toy imports.

Vicky Tong, a director at the Business Association of China in Vietnam, said the office responsible for Guangdong, where many Chinese toymakers are based, saw a near trebling of visits last year from companies looking for production facilities in the country.

Jerry Gou, who heads a toy manufacturer based in the southern Chinese city of Suzhou, is one toymaker who has realized the advantages of having factories outside China. At the annual toy fair in Hong Kong recently, he sought to attract international buyers by decking out his booth in banners promoting its factories in Vietnam and India.

With U.S. President Donald Trump threatening to impose 25% tariffs on Chinese goods, Gou believes buyers will prefer manufacturers who are able to ship toys from outside China.

"You never know what will happen in the future," Gou said. "We need to make plans early on."

Gou and other toymakers have reason to be nervous. China produces 80% of the world's toys, and the U.S. is its largest customer. With the 90-day trade war truce between Washington and Beijing set to expire on March 1 -- and recent talks yielding little progress -- many Chinese toymakers are accelerating their overseas relocation efforts.

The most popular choice has been Vietnam, due to its proximity to China, according to industry sources.

"The U.S.-China trade war has definitely quickened Chinese manufacturers' shift to Vietnam," Tong said, as most visiting companies do substantial export business with the U.S. She said the office responsible for Guangdong had received visits from 27 corporate groups last year, more than double the 11 it hosted in 2017.

Toys and plastics factories are among those making the most urgent requests, she said. Tong recalled a group of Chinese manufacturers who came last August and presented a bag of cash to factory owners. "They pleaded, 'Please rent the factories to me,'" Tong said, even though the factories are still under construction. 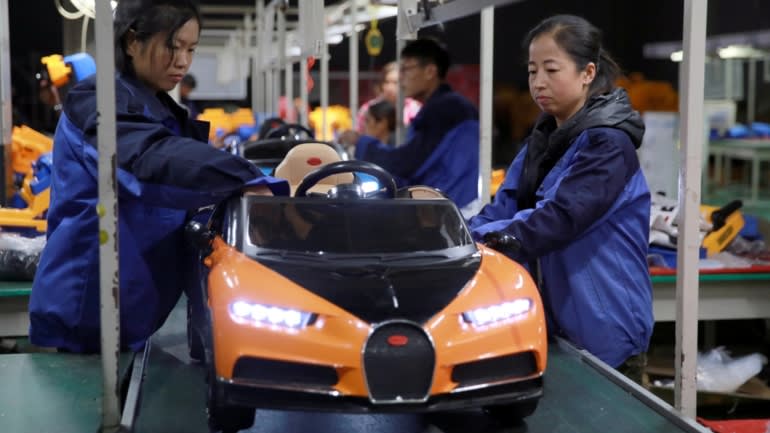 While production costs in China are rising, the country boasts an ecosystem of suppliers that other countries cannot yet rival.   © Reuters

This sudden uptick in demand has already driven up land prices in Vietnam. Rent for factories in Long An Province in the Mekong Delta region surged 20% to $2.60 per sq. meter within just a few months, she said.

Chinese toys have long enjoyed zero tariffs in the U.S. While only a very few toy categories, such as children's bicycles, are subject to the 10% punitive tariffs Trump has imposed so far, some international buyers are calling for a shift away from production in China.

Nathan Jolly, a sales director at Australia-based NGJ Trading Co., said the company is negotiating with its Chinese toy suppliers to set up factories outside the country.

"I don't think [the trade dispute] is going to be a major issue, but you should always prepare for the worst case," he said. The U.S. is the largest market for NGJ Trading.

Many Chinese toymakers began gradually shifting some of their production to cheaper Southeast Asian locations a few years ago due to rising labor costs and tighter environmental regulations at home. But as such moves gather pace, the relative benefits of these locations are starting to fade.

"We notice it is getting harder to hire workers in Vietnam," said Dominic Tam, honorary president of the Toys Manufacturers' Association of Hong Kong. With the increasing number of Chinese factories setting up facilities there, he said, its advantages in terms of cheaper labor costs and rents are narrowing fast.

"In less than five years, manufacturers would face the same problems again," Tam said, adding that Vietnam's total population is smaller than that of China's Guangdong Province.

And not everyone is in a hurry to leave China. One major reason is the lack of local suppliers in other countries.

Tam, who also owns a toy factory in Indonesia, said more than 95% of the materials it uses are imported from China, as local producers are not capable of manufacturing parts that meet U.S. and European standards for toy safety.

"No country in the world can come close to China's capacity and efficiency in producing goods," said Richard Gottlieb, CEO at New York-based Global Toy Experts. "American toy companies have enjoyed a long, close relationship with Chinese manufacturers... for decades," he said. "There is no desire to move away from China." 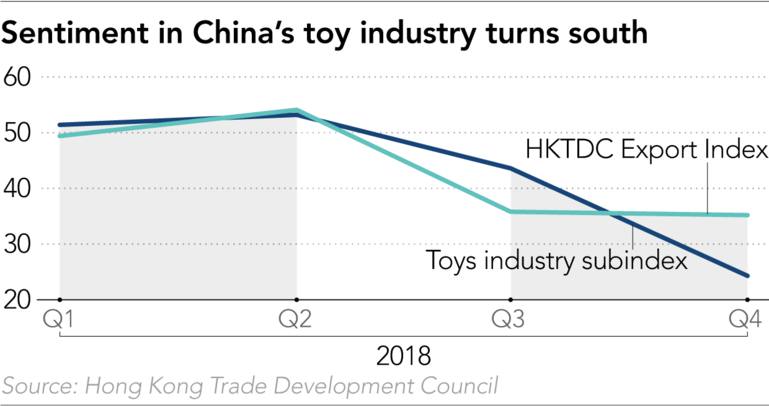 "It sucks, but I don't see any other option," Hill said. "Who is going to build all the infrastructure overnight?"

Nevertheless, the shift is taking its toll on businesses in China.

Since opening up its economy to the world four decades ago, China has become the largest maker of toys, thanks to its ample supply of cheap labor. The southern province of Guangdong built a particularly impressive supply chain and infrastructure, and at its peak was producing more than half of the world's toys.

But as trade tensions with the U.S. drag on, manufacturers who thrived on international trade are turning to the domestic market as household incomes rise.

Li Aimin, owner of a Xiamen-based toy company, started developing coding robots for children in China five years ago. Instead of moving production to countries with lower costs, he uses manufacturers in Shenzhen who can meet his high technical specifications. Li said he is turning a profit.

"When you have your own brand and intellectual property, the manufacturing costs become less of a concern," he said.

By contrast, he said he has friends in the industry who have moved to Vietnam and Philippines and are struggling to keep the costs low by making $1 toys day in, day out.

But few Chinese manufacturers have their own brands and designs to rely on, and shifting to the domestic market, moreover, means competing directly with popular toy lines like Disney that have a strong following in China.

Paul Tong, managing director at Hong Kong Creative Fun, is struggling with the transformation. A civil engineer by training, he has been involved in the toy industry since 1975 but shifted his focus in 2004 to developing a mosaic and puzzle game under the name Mostaix. But more than a decade later, the segment only contributes a small amount to revenue at his company, which still relies on manufacturing low-cost plastic toys for export to the U.S. and other developed markets.

"It's a lot more difficult to build your own brand," Tong said.