TOKYO -- Asian emerging markets are suffering a notable slowdown in trade, part of a global trend suggesting a loss of economic vigor that could outlast U.S.-China frictions.

Emerging Asian countries, including China, logged a 4.6% drop in trade volume on the year in December, according to the Netherlands Bureau for Economic Policy Analysis, or CPB. This stands in sharp contrast to the 10.8% growth in October.

The trade war has made companies hesitant to spend on capital investments, which has weighed on Southeast Asian and Japanese exports to China, said Sony Financial Holdings chief analyst Masaaki Kanno.

A closely watched CPB index measuring world trade volume fell 1.4% on the year in December, marking its first decrease since January 2016. "There was a rush to get exports through before the U.S. raised tariffs on China, which likely ate into trade in the latter half of the year," Kanno said. 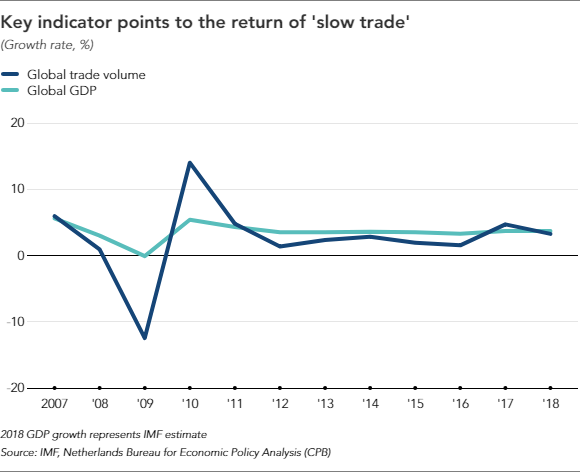 As more companies operate across borders, experts worry that sluggish international commerce is a result not only of the trade war but also of sinking economic potential. The International Monetary Fund said January that the world economy grew 3.7% in 2018, meaning that trade now lags global growth in a phenomenon called "slow trade."

Slow trade typically occurs only in the aftermath of a major economic shock. But the last stretch, which began in 2012 after the global financial crisis, dragged on until 2016 and was considered a sign of a structural shift in the global economy.

A Bank of Japan analysis blamed factors like a drop in potential growth rates, citing a significant fall in imports of production machinery and other capital goods.

There are similar signs today: Chinese orders for Japanese machine tools plunged 52.3% on the year in January, sinking for the 11th straight month, according to the Japan Machine Tool Builders' Association.

The U.S.-China trade war has entered a cease-fire after the Trump administration decided to extend its Saturday deadline to impose higher tariffs on Chinese goods. Negotiations in the coming weeks could put trade between the world's largest economies back on track.

But if the slowdown in trade is indicative of weaker global growth potential, the recovery seen in 2017 may prove to have been a temporary bounce.

Recent trade figures "raise concerns that the global economy could slow faster than we are expecting," said Yoshimasa Maruyama at SMBC Nikko Securities.