AirPods Pro on display at an Apple store in Shanghai: The wireless earbuds, which offer noise cancellation, are made in China by a Chinese company, Luxshare. (Nikkei montage/Getty Images).
LAULY LI and CHENG TING-FANG, Nikkei staff writersNovember 27, 2019 12:34 JST | China
CopyCopied

TAIPEI -- Apple will use a "wolflike" Chinese manufacturer to meet surging consumer demand for its AirPods Pro wireless earphones even as the California-based company has lobbied Washington for tariff relief amid the ongoing U.S.-China trade dispute, the Nikkei Asian Review has learned.

In a threat to its usual suppliers, Apple has asked little-known Luxshare-ICT to double production of AirPods Pro earphones at its Chinese facilities to 2 million units a month, sources said. Apple has also asked Luxshare and fellow Chinese company Goertek to boost production at their Vietnam-based factories of the lower-cost AirPods, the world's best-selling wireless earbuds.

Apple's move is further evidence that Chinese companies, contrary to Washington's desire to hobble their technological capabilities, can meet sudden demands for extra production while maintaining stringent quality control. It also shows that sales of Apple "hearables," which already have a 45% share of the wireless earbud market, continue to boom.

"Apple has increased monthly orders for the latest AirPods Pro from 1 million units to at least 2 million units thanks to healthy demand," said one of the people familiar with the situation. The Pro version is produced at two Luxshare factories in mainland China, sources added.

The request also offers a broader warning about the advance of China's tech manufacturing sector, which has caught up with global rivals to make evermore high-end products. By 2018, Chinese suppliers already accounted for 41 of Apple's top 200 suppliers, more than their U.S. and Japanese counterparts, a Nikkei Asian Review analysis shows.

"In the future, it [wireless earbuds] could well sell at the level of the iPhone, with some 200 million units a year," said Jeff Pu, a veteran tech analyst at GF Securities, who estimates Apple will ship 80 million wireless earphones in 2020. Bloomberg last week reported that shipments this year could double to 60 million units, thanks in part to the AirPods Pro's popularity.

The new wireless earbuds, which offer noise cancellation as well as water resistance, were launched by Apple on Oct. 31 at a price of $249, and deliveries have a wait time of up to one month due to robust demand. The more basic version, first launched in 2016, has a price tag of $159. Wearables such as the AirPods have emerged as a key growth driver for Apple, as iPhone sales have hit an apparent plateau. 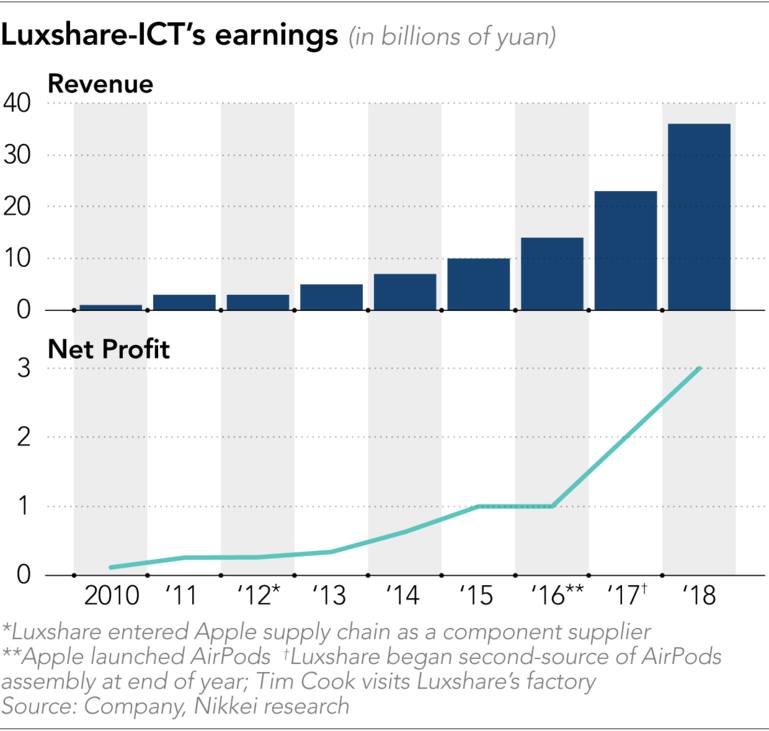 "It's a very rare case that Apple sources a brand-new and high-end device firstly to a Chinese company," one source said. "That means this supplier really is able to meet Apple's critical demands for quality and efficiency."

Luxshare has a "wolflike" culture that values aggressiveness, an executive at an Apple supplier added. "Their team is young and moves so fast," the executive said. "They told me that 'you guys are great but you are not combative as a wolf to adapt to rapidly changing business dynamics.'"

Founded in 2004 by Grace Wang, a former production line worker at Foxconn, the world's biggest electronics maker and main iPhone assembler, Luxshare has evolved from a small maker of components into a manufacturing powerhouse that serves international customers including Apple, Huawei Technologies, Oppo, Vivo and Tesla.

The Chinese company entered Apple's supply chain as a peripheral component supplier in 2012. But in just five years it emerged as a source for more complicated work. It has been making AirPods since late 2017, and this year won orders to assemble Apple Watches as well. Tim Cook, Apple's CEO, has praised Luxshare's success as a realization of the "Chinese dream."

The Chinese-made AirPods Pro earbuds already face tariffs due to the ongoing U.S.-China trade dispute. Despite the unrest in Hong Kong, China and the U.S. are "very close" to a phase one trade deal, the Global Times, a tabloid controlled by China's Communist Party, reported on Monday.

Apple, which has also sought direct tariff relief from U.S. President Donald Trump, has meanwhile turned to Vietnam as a production base in order to avoid American tariffs on Chinese goods. Goertek is ready to begin mass production of AirPods there, while Luxshare is undertaking production trials as a prelude to mass production, Nikkei has learned.

"Chinese companies are much more aggressive than their Taiwanese or Japanese peers when it comes to production diversification from China to counter [U.S.] tariffs," said another executive at a second Apple supplier. "While we are still evaluating and reviewing whether to buy a factory in Vietnam ... Luxshare and another Chinese company have made their decision to grab it."

Revenues at Guangdong-based Luxshare have soared by 3,445% since 2010 to reach 35.85 billion yuan ($5.1 billion) in 2018, while net profits have jumped 2,247% to 2.72 billion yuan. With a market capitalization of around 177 billion yuan, the company has also surpassed the value of most of its Taiwanese and U.S. rivals, such as Quanta Computer, Pegatron and Flex.

"I see Luxshare as a formidable rising competitor," said a third Apple supplier executive, who has monitored the Chinese company for years. "If we don't keep improving our competitiveness, sooner or later it will eat Taiwanese companies for lunch."

Luxshare's progress is in line with Beijing's policy for China to become the world's next tech superpower. This month, Beijing announced a new 147 billion yuan fund with the aim of further boosting Chinese sufficiency in next-generation information technologies.

"Luxshare operates in a more cost-effective way than its rivals thanks to the support of the Chinese government," GF Securities' Pu said. "It also really is reacting faster to relocate production outside China because of the trade war. Those advantages will help Luxshare gain more business, which will definitely pressure its peers."

Apple, Luxshare and Goertek did not respond to requests for comment.