TOKYO -- After the U.S. levied duties on $34 billion worth of Chinese imports on Friday, China countered with a 25% tariff on a like total of U.S. goods.

China's first target is mainly soybeans and other agriculture products. But Beijing also plans to impose a 25% tariff on crude oil and other energy commodities when Washington imposes a 25% levy on an additional $16 billion worth of Chinese imports.

China is the world's largest consumer of soybeans, depending on imports for about 90% of its needs. The U.S. alone accounts for over 30% of China's total consumption of the legume. Now, as a result of the tit for tat, China is hunting for alternative suppliers.

Brazil is currently China's main source for soybeans, but does not have the capacity to make up for the loss of imports from the U.S. That would put Russia and Central Asia high on the list. Both are attractive alternatives, as China's Belt and Road Initiative is reducing the time needed to transport commodities through Eurasia. 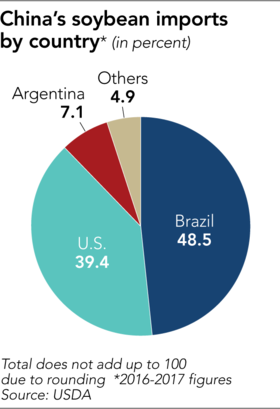 China also depends on Kazakhstan for soybeans, as well as wheat. The Kazakh Ministry of Agriculture wants to ramp up wheat exports to China, and is targeting 1 million tons in 2020 -- nearly three times more than in 2016.

In June, Kazakh President Nursultan Nazarbayev held talks in Beijing with Chinese President Xi Jinping, during which the two agreed to expand ties in transportation, agriculture and other sectors.

For Washington's second round of tariffs totaling $16 billion, Beijing has yet to decide how to retaliate, but is considering crude oil and other energy products. China is the second- largest market for U.S. crude oil, behind Canada. In the first three months of 2018, China's crude imports from the U.S. doubled from a year earlier to 350,000 barrels per day.

Still, the U.S. provides only about 3.5% of China's oil imports, while China accounts for about 20% of U.S. crude exports. Beijing's tariffs could put the brakes on U.S. oil exports at a time when the U.S. is trying to expand them.

"While China could secure the crude from alternative sources ... the US would find it hard to find an alternative market that is as big as China," according U.K. research company Wood Mackenzie.

Many experts predict China will switch to Angola and Middle Eastern countries for medium crude oil and Nigeria for light crude.

Russia can also pump up oil exports to China. In November 2017, it completed a second East Siberia-Pacific Ocean pipeline, which transports crude directly from eastern Siberia to northeastern China. The expansion has doubled the amount of oil Russia can export to China via pipeline to about 30 million tons annually. An oil pump in the U.S. While crude and natural gas could be the target of Chinese retaliatory tariffs, LNG may be exempt.   © Reuters

The impact of the trade war on China's crude imports is "neutral" to the global market because China can easily import crude from other countries, says Tsuyoshi Ueno, a senior economist at NLI Research Institute. But it will push down West Texas Intermediate crude, a key oil benchmark, by creating a glut in the U.S. market, Ueno predicts. The squabble could also affect the market for liquefied petroleum gas, such as propane, the production of which has grown in the U.S. due to the shale gas revolution. The U.S. supplies a quarter of China's imported propane, a figure that would likely decrease if Beijing targets the gas with tariffs.

Chinese businesses are already reacting. According to an industry source, one Chinese importer is looking to switch from U.S. LPG to imports from the Middle East.

China seems determined not to budge in its face-off with the U.S., but the list of goods subject to retaliatory tariffs indicates that Beijing is carefully weighing its options. While crude and natural gas are on the list, liquefied natural gas (LNG) is not, it being vital to the country's shift away from coal as it fights air pollution. And imposing a high tariff on LNG from the U.S. could trigger inflation.

Ultimately, the trade war between the world's two largest economies will likely put downward pressure on a broad range of U.S. commodities. But as Beijing still reels from its failure to secure gas supplies last winter, LNG from the U.S. may be safe from levies, at least for now.