Best known as the supplier for Dyson Ltd's distinctive vacuum cleaners and HP printers, the Taiwanese manufacturer says that far from disrupting its business, the U.S.-China trade war has been a "once-in-a-lifetime" opportunity.

"The trade war has given us a rare opportunity to engage with big international companies that we could not have reached in the past," said New Kinpo CEO Simon Shen. "If not for a big shake-up of an era like this, these chances would not be ours to have."

Buoyed by this year's new clients, which includes a global top five notebook maker, the Nikkei Asian Review has learned, Shen said Kinpo had already prepped two new facilities in Mahachai and Pethaburi in Thailand, as well as acquiring 500,000 sq. meters of land where it planned to build another two plants next year.

Founded in 1973 -- a year before the world's largest contract electronics manufacturer Foxconn -- Kinpo has yet to achieve the stellar growth of its rivals that also include Pegatron, Quanta Computer and iPad supplier Compal Electronics.

Winning the new supply contracts was not easy, admitted Shen, who said Kinpo was initially in talks with up to 10 potential new clients ranging from makers of notebooks and game consoles to smart home device producers keen to diversify their supply chains outside China as the trade war between Beijing and Washington continued to escalate. 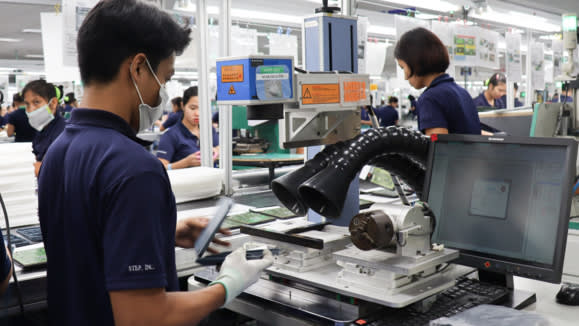 "Many clients spent nine months or even longer weighing on the fickle progress of the trade talk and monitoring President Donald Trump's attitude," Shen said. "In the end three decided to go ahead with the capacity move plan no matter what, as it is an indisputable fact that manufacturing costs in China are rising."

Kinpo will start producing and shipping its new clients' products from its newly added Thai facilities from the first quarter of next year. "When we got new orders, that means some existing players lost the orders," Shen said.

Beginning to reposition itself away from China up to a decade ago while other suppliers scaled up their China capacity, Shen said Kinpo's decision to invest in Southeast Asia where labor costs remain much lower, was starting to pay off.

Before the Trump administration imposed its first wave of tariffs of $34 billion on Chinese goods in July 2018, few believed it would escalate to the full-blown trade war that has shaken the world economy.

Although Beijing and Washington appear to be closer to inking the first-phase of a deal to partially resolve their trade differences, many tech companies have quietly reallocated some of their production capacity outside of China.

American companies including Google, Facebook, Microsoft, HP and Dell have asked suppliers to look at expanding production in countries including Vietnam, Thailand, the Philippines and Taiwan, the Nikkei Asian Review has reported earlier.

Apple has asked China's Luxshare Precision Industry and Goertek to ramp-up production for its popular AirPods in Vietnam, the Nikkei reported, and has also started exporting iPhones made in India. 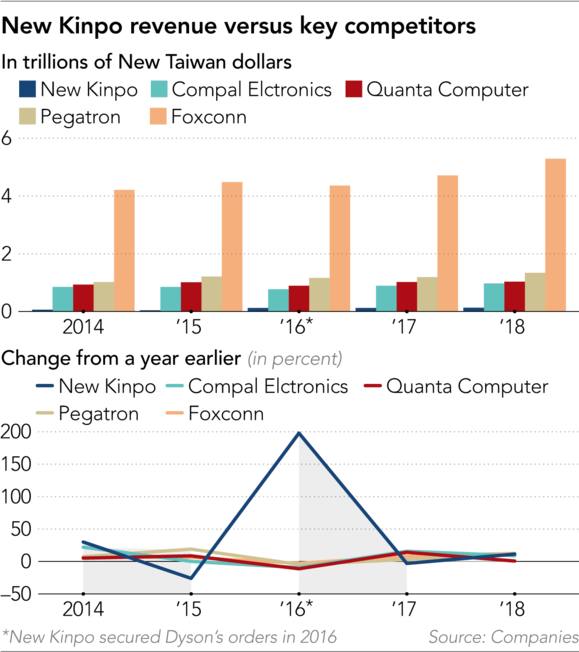 Still, while the trade war has presented an opportunity for companies such as Kinpo, it also faces new challenges such as overcoming the steep learning curve associated with making new products, as well as meeting stricter production standards.

Rival suppliers are also starting to accelerate their outside China. Pegatron launched its Indonesian facility went into operation earlier this year, and the company recently rented a factory in Vietnam, multiple sources told the Nikkei Asian Review. Quanta has bought a factory in Thailand where it is in the process of readying production lines. Foxconn also increased investments in Vietnam, Taiwan and India.

"The key challenges for tech suppliers entering into Southeast Asia is that there are no matured clusters for suppliers yet," Jessica Hsu, senior industry analyst at Market Intelligence & Consulting Institute, told Nikkei. "So they will face costs of production shift, as well as the time it takes to increase production efficiency."

With so many tech manufacturers rushing into the region in the same time, Hsu said Southeast Asia's infrastructure readiness was another challenge. "Electricity, water, labor resources, not to mention language barriers and cultural differences are tests that await them," she said.