TAIPEI -- In every war there are unintended consequences. Washington's decision to go on the offensive against China's leading technology group, Huawei Technologies, by requesting the arrest and extradition of its chief financial officer -- whose father happens to be 74-year-old founder Ren Zhengfei -- was no exception. And supply chains crisscrossing the world stand to pay the price.

The news that Meng Wanzhou had been arrested in Canada on Dec. 1, the day the American and Chinese presidents were meeting, drove down markets across the world on fears that the trade war truce will prove short-lived.

Trump administration officials tried to downplay the view that the arrest was used as a tool to extract concessions from Beijing. "They're different tracks, if you will," National Economic Council Director Larry Kudlow told Bloomberg Television on Dec. 7. "One is a trade reform track, and the other one ... is a law enforcement track."

That one executive's arrest could shake global markets is testament to Huawei's rapid growth in scale and importance. In the 31 years since being founded by Ren with $3,000 in the southern Chinese city of Shenzhen, it has gone from an obscure trading company for telecommunications devices to become the world's largest telecom equipment provider and second-largest smartphone vendor.

With annual revenue of $92.5 billion, it is close in size to Microsoft and to Google parent Alphabet, as well as more than two times as large as e-commerce king Alibaba Group Holding. It is China's top employer, boasts 180,000 staffers worldwide, and spends some $15 billion on research and development every year. 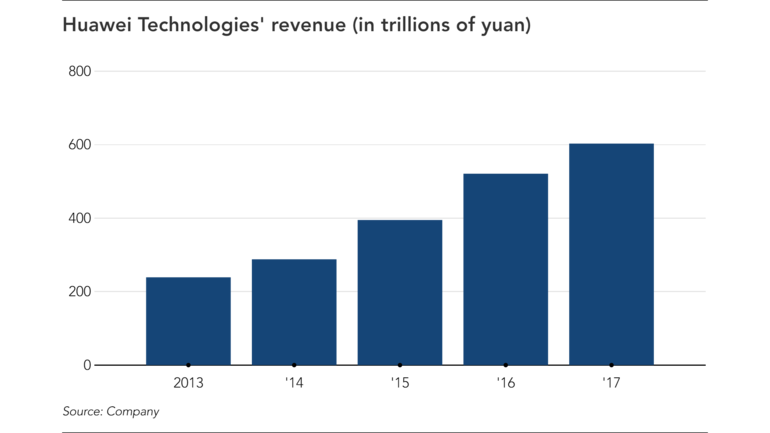 The arrest comes at a time when carriers around the world prepare to pour billions of dollars into equipment for fifth-generation wireless technology. Huawei has spent years positioning itself to benefit from such demand.

For China, this company is too big to fail.

Huawei is more self-reliant than Chinese telecom gear maker ZTE. It controls the country's most advanced semiconductor design capability -- an area China is desperate to develop so as to depend less on foreign tech. The company designs its own smartphone core processor chips on a par with those used in Apple's iPhones and is also one of the world's top five server makers. Huawei has also unveiled its ambitions in artificial-intelligence chips for use in servers and wearables to challenge global leaders Qualcomm and Nvidia.

"Huawei is the largest company in China," said Jonah Cheng, chief investment officer at J&J Investment and a veteran tech analyst at UBS, to the Nikkei Asian Review. "Attacking Huawei is like attacking the root of China."

Meng's detention emphasizes that the U.S. still has plenty of other nontariff weapons to deploy in its economic and technological campaign against China, Gavekal Research analyst Tom Holland said.

Should the U.S. decide to restrict Huawei from using American technology, as it did with ZTE, it is expected to rattle global supply chains in unprecedented ways.

While being China's national champion and a source of pride, Huawei still must count on global top-tier suppliers to make premium handsets, servers and telecom equipment.

According to Gartner, Huawei spent some $15 billion purchasing semiconductors in 2017 and was one of the largest buyers globally with a 3.5% share trailing Samsung Electronics and Apple but similar to the levels of HP, Dell and Lenovo Group.

"Huawei is one of the biggest buyers for technology components and semiconductors as it controls more than 27% market share in making telecom equipment and 14% in the global smartphone market," Bernstein analyst Mark Li said.

"An embargo on Huawei, should it happen, could halt operations and result in significant supply chain disruptions in the near term," Li said.

Huawei semiconductor arm HiSilicon is a leading customer of the world's biggest contract chipmaker, Taiwan Semiconductor Manufacturing Co., accounting for up to 10% of its revenue. It is also a major client for ASE Industrial Holding, the world's top chip packaging company.

Huawei also consumes at least 200 million units of display panels a year from the likes of Japan Display, LG Display and BOE Technology Group. It purchases even more camera lenses from Largan Precision and Sunny Optical, leading suppliers in the sector.

"It is worth monitoring if top components suppliers from other countries beyond the U.S., such as Taiwan's TSMC, Japan's Murata Manufacturing and South Korea's LG Display, will also be under pressure to stop supplying key parts to the Chinese company" if Washington imposes a ban on acquiring American parts, J&J Investment's Cheng said.

Such a scenario would deal a blow to Huawei's fast-growing smartphone business, which recently overtook Apple as the No. 2 player in smartphones. 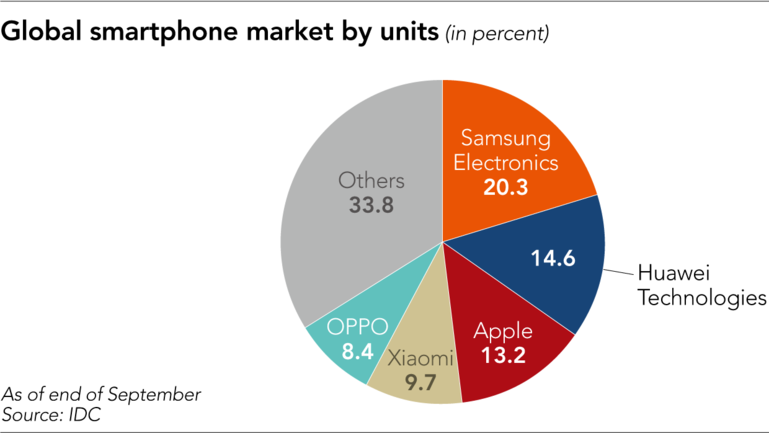 On the flip side, a downturn at Huawei would give the likes of Apple and Samsung a breather amid a market slowdown. Global smartphone sales are on track to decline for a second consecutive year in 2018.

Huawei is one of the few companies showing robust growth, on the back of its popular design and its collaboration with world-class suppliers, as well as its marketing success in China, Europe and Africa.

"We previously thought that Huawei would be one of our fastest-growing clients over the next few years," said an executive at Taiwan's King Yuan Electronics, a Huawei supplier and the world's top provider of chip-testing services.

"But Huawei's rise has touched a nerve in the U.S., and the company's ascent could be seen as harming American interests," the executive said. "It is very difficult to predict what will happen in the coming days, and we acknowledge the political risks."

The pressure on Huawei has international repercussions. This is especially true for businesses in Japan, where the Chinese company has grown increasingly prominent in recent years as both a supplier and a customer.

Backed by highly competitive prices -- reportedly 40% to 50% lower than Japanese rivals -- Huawei has carved out a market share of 13% in cellular base stations in Japan to close in on NEC and Fujitsu, at about 18% each.

Also helping Huawei is its greater financial wherewithal to invest in advanced technology. The company's net profit is 17 times as high as NEC's, and it spends 13 times as much on R&D.

A Japanese government ban on Chinese vendors -- along the lines of those implemented by Australia and New Zealand -- will disrupt Japan's plans to be at the forefront of the transition to 5G.

Such a move "could delay the introduction of 5G," said an employee at SoftBank Group, the sole user of Huawei base stations among Japan's big three wireless carriers.

Murata, which sells parts for smartphones and base stations to Huawei, is in wait-and-see mode. "Our understanding is that the bans apply to government-related equipment," President Tsuneo Murata said.

"It's unclear how effective they will be," he said.

Huawei also recently lost key European customer BT Group, which has decided to remove Huawei products from its core network and bar their use in future 5G infrastructure.

Then there is the huge U.S. market, which had already largely shut Huawei out. 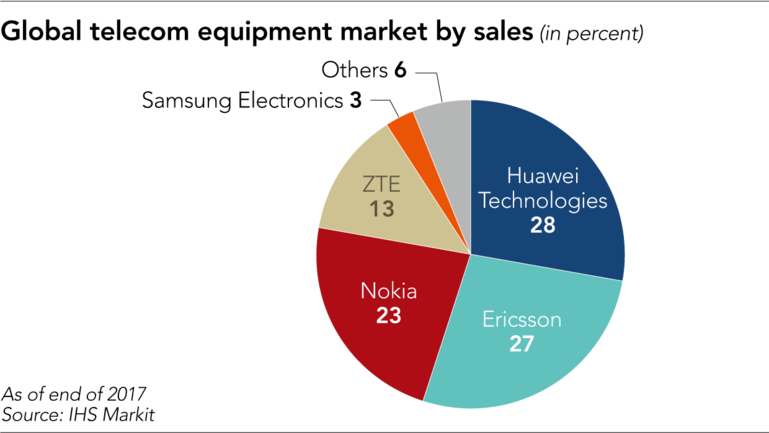 "This is unprecedented in the history of telecom," said Stephane Teral, executive director and a telecom infrastructure expert at research company IHS Markit.

"The equipment supply chain is already strained, and banning Huawei in many more countries is going to create a vacuum that no one can fill in a timely fashion," he told the Nikkei Asian Review.

Remus Hsu, a telecom analyst at the Taipei-based Market Intelligence & Consulting Institute, said the refusal of the U.S. and other countries is expected to dent Huawei's overseas revenue, which accounts for nearly half the company's total intake.

But the very countries that ban Huawei may also need to bear additional costs, he said.

"Huawei has built a strong patent wall in 5G technology over the years, and it will be hard for those countries to bypass Huawei's technologies entirely while trying to catch up in the development of 5G," Hsu said.