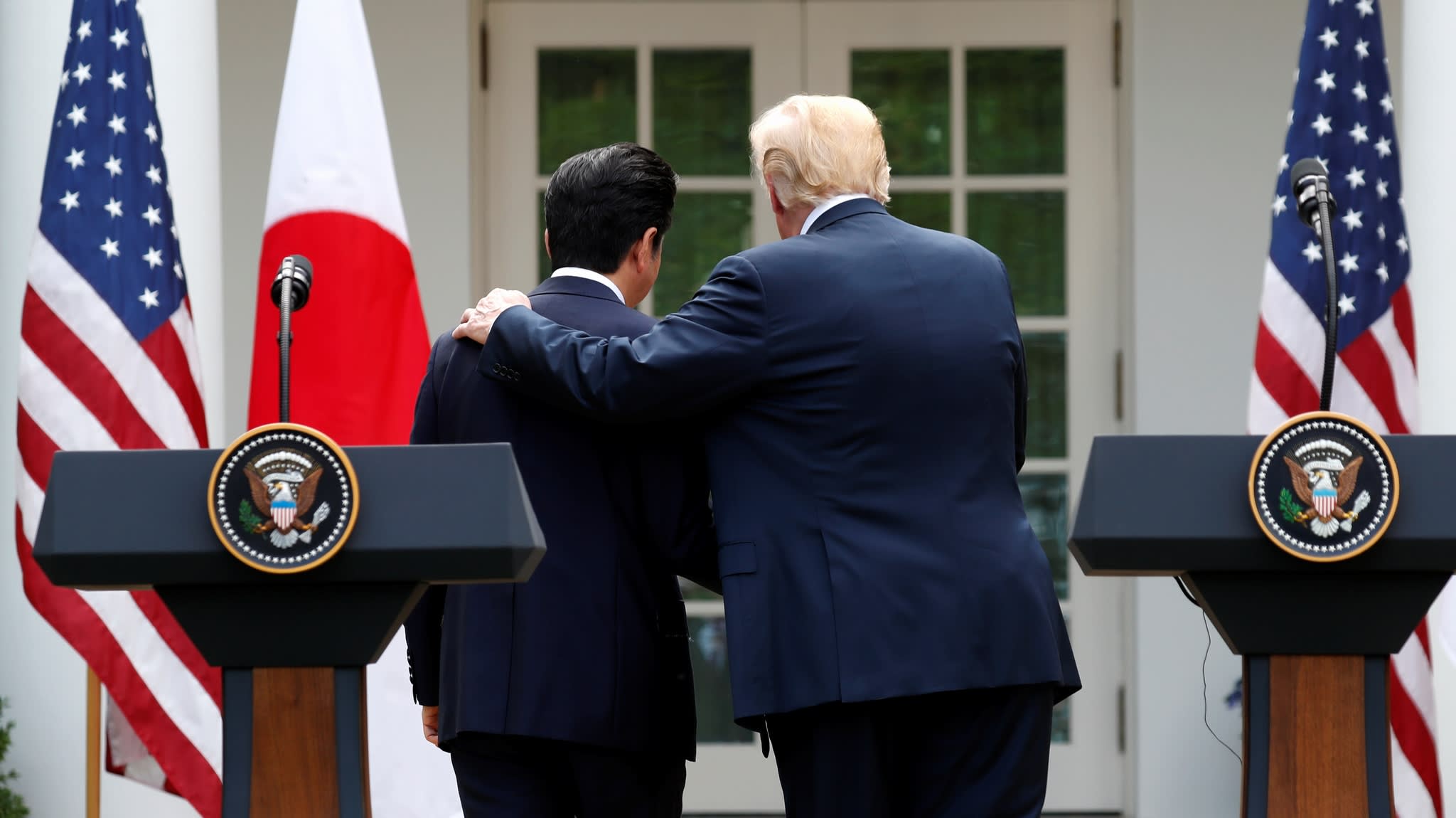 WASHINGTON -- U.S. President Donald Trump continued to dial up the pressure on Japan over trade, saying on Friday that Tokyo "knows it's a big problem" if it does not agree to a deal with Washington.

Talking to reporters aboard Air Force One, Trump said that the U.S. and Japan had begun discussions over trade. "We're starting that. ... In fact, Japan has called us. ... They came last week," he said.

"And I'll tell you, if we don't make a deal with Japan, Japan knows it's a big problem," he said.

Japan is preparing for the possibility that it will be the next target in the president's crusade against trade deficits, ahead of the American midterm congressional elections this November.

On Thursday, Trump mentioned the U.S. trade deficit with Japan in a phone call to James Freeman, assistant editor of The Wall Street Journal's editorial page. He "described his good relations with the Japanese leadership but then added: 'Of course that will end as soon as I tell them how much they have to pay,'" Freeman wrote.

The goods deficit came to about $35.3 billion on a seasonally adjusted basis for the first half -- the third-largest among U.S. trading partners.

This was not Trump's first swipe at Japan. "I'll talk to Prime Minister [Shinzo] Abe of Japan and others -- great guy, friend of mine -- and there'll be a little smile on their face," he said in March. "And the smile is, 'I can't believe we've been able to take advantage of the United States for so long.' So those days are over."

Trump is believed to have avoided such bellicose language so far in face-to-face meetings with Abe, instead making demands via the news media. "A few strong words won't change the nature of the relationship between Japan and the U.S.," an official involved in trade talks said.

Other Japanese leaders tiptoed around the topic. "I don't know the relationship between The Wall Street Journal and Mr. Trump, and I don't know how much of it was true," Deputy Prime Minister and Finance Minister Taro Aso told reporters on Friday.

"We look forward to a frank exchange to advance the dialogue," said Toshimitsu Motegi, the minister in charge of trade talks.

But Trump has kicked U.S. protectionism into high gear ahead of the midterms, eyeing a third round of tariffs against China that could impact $200 billion in imports. There is no guarantee of Japan escaping unscathed.

Relations between the two countries now rely heavily on the personal rapport between Trump and Abe, and Tokyo is planning for them to play golf before a summit eyed for later this month. Whether the leaders' friendship will be enough to prevent trade tensions from escalating is unclear.

Japan and the U.S. are holding their second "free, fair and reciprocal" trade talks as early as this month. In the first round this August, the U.S. pushed for bilateral negotiations for a free trade agreement, but Japan was more interested in a multilateral framework. The two sides also could not reach agreement on automobile tariffs and opening up the Japanese agricultural sector.

The Trump administration has been doubling down on other countries. It agreed in July to start negotiating lower tariffs with the European Union and reached in August a basic agreement with Mexico to renegotiate the North American Free Trade Agreement. It is also in talks with Canada on NAFTA.