Shinzo Abe readies for 'all-or-nothing' meeting with US president Donald Trump and Shinzo Abe will reprise their 2017 summit in Japan next week in the U.S.

TOKYO -- Japanese Prime Minister Shinzo Abe plans to propose a new framework for trade talks when he meets with Donald Trump next week, in hopes of nudging the U.S. president toward rejoining the Trans-Pacific Partnership.

Yet despite Trump's recent show of interest in returning to the TPP to counter China's rise, persuading him to do so may pose a challenge for even one of his closest allies.

The trade talks would be separate from the economic dialogue led by Deputy Prime Minister Taro Aso and Vice President Mike Pence. Tokyo envisions the new framework being handled by Toshimitsu Motegi, Abe's TPP point man, and U.S. Trade Representative Robert Lighthizer. Abe will speak with Trump in Florida on Tuesday and Wednesday.

The U.S. withdrew from the TPP almost immediately after Trump took office. The 11 remaining member countries reworked the Pacific Rim trade and investment deal into the Comprehensive and Progressive Agreement for Trans-Pacific Partnership, which was signed in Chile last month.

To Trump, who is pushing for a bilateral trade agreement, the year-old economic dialogue looks like a Japanese attempt to buy time until the 2020 presidential election, which could bring in a president more sympathetic to Tokyo's way of thinking. With the new talks, Japan would aim to bring America back into the TPP, but Washington may use the platform to force Tokyo to choose between renegotiating the regional deal and signing a bilateral agreement.

Recent comments by Trump suggest this is likely to be the case. After telling lawmakers and governors Thursday that he was open to rejoining the TPP, he tweeted that he would only do so "if the deal were substantially better than the deal offered" to his predecessor Barack Obama.

The president added that the U.S. already has "BILATERAL deals with six of the 11 nations in TPP, and are working to make a deal with the biggest of those nations, Japan, who has hit us hard on trade for years!"

Trump insists that Japan is out to get America on trade. "I'll talk to Prime Minister Abe of Japan and others -- great guy, friend of mine -- and there'll be a little smile on their face," he said last month in remarks announcing plans to slap tariffs on imports from China. "And the smile is, 'I can't believe we've been able to take advantage of the United States for so long.' So those days are over."

In fact, the U.S. trade deficit in goods with Japan fell nearly 20% over a decade to $69.7 billion last year. This made up just 8.6% of America's total trade deficit, down from about 30% 20 years earlier. China's share is far bigger. 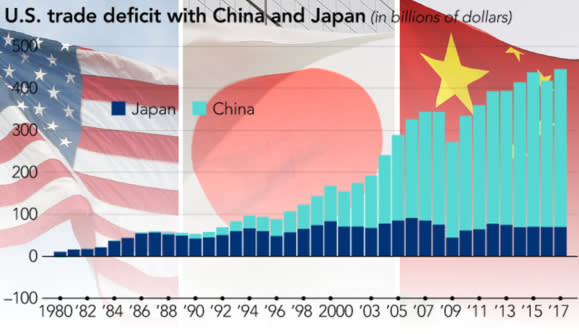 Yet Trump is not one to back down when his facts are questioned. He sees a bilateral trade pact as his best chance to reduce the imbalance.

Such a deal would put pressure on Japan to increase imports of autos, agricultural products and other American goods. The U.S. also is sure to call for scrapping nontariff barriers, such as safety and environmental standards, in the auto industry, which accounts for 60% of the trade deficit.

The situation probably will be much the same with American beef. The new TPP will gradually cut the duty on frozen and chilled beef from member countries such as Australia to 9%. This would tilt the playing field against U.S. beef, which still faces a 38.5% tariff. Trump, looking to reassure worried farm states ahead of midterm elections in November, will surely press Abe to lower tariffs that put U.S. ranchers at a disadvantage.

The trade war brewing between the U.S. and China is likely to add another wrinkle to the Abe-Trump meeting. Japan is keen to improve ties with China this year, which is the 40th anniversary of the normalization of diplomatic relations.

Meanwhile, Beijing is drawing closer to Tokyo in what may be an effort to drive a wedge in its neighbor's relationship with Washington. A senior Chinese Commerce Ministry official told a Japanese representative last month that Japan, China and South Korea should work together to protect free trade. Japan and China have reopened high-level economic talks for the first time in eight years.

The traditional bottom-up approach to diplomacy, built on working-level talks, does not work with the Trump administration. The president often makes decisions without even his aides being aware of them, as with his acceptance of an invitation to meet with North Korean leader Kim Jong Un.

This puts an even heavier burden on Abe. Next week's meeting presents a chance to resolve a number of outstanding issues in one go. But if the relationship between the two leaders breaks down, the prime minister will find himself isolated.

Abe has said that while he understands Trump better now than at their last U.S. meeting in February 2017, "the pressure is higher" this time around. The prime minister -- who has met with Trump five times and spoken with him by phone 20 times since the January 2017 inauguration -- seems to have lost some confidence in his rapport with his American counterpart.

On Friday, the prime minister held the latest in a series of study sessions ahead of the trip. He was full of questions about how to respond in a variety of hypothetical exchanges with Trump.

The meetings, which were sometimes held multiple times per day and could run for more than two hours in total, were attended by representatives from a broad cross-section of the government.

Abe has expressed determination to impress upon Trump the importance of free trade and dealing properly with North Korea. But he also said he is going into an "all-or-nothing" meeting with no playbook to work from. This is likely to mark a turning point for the "Shinzo-Donald" relationship.