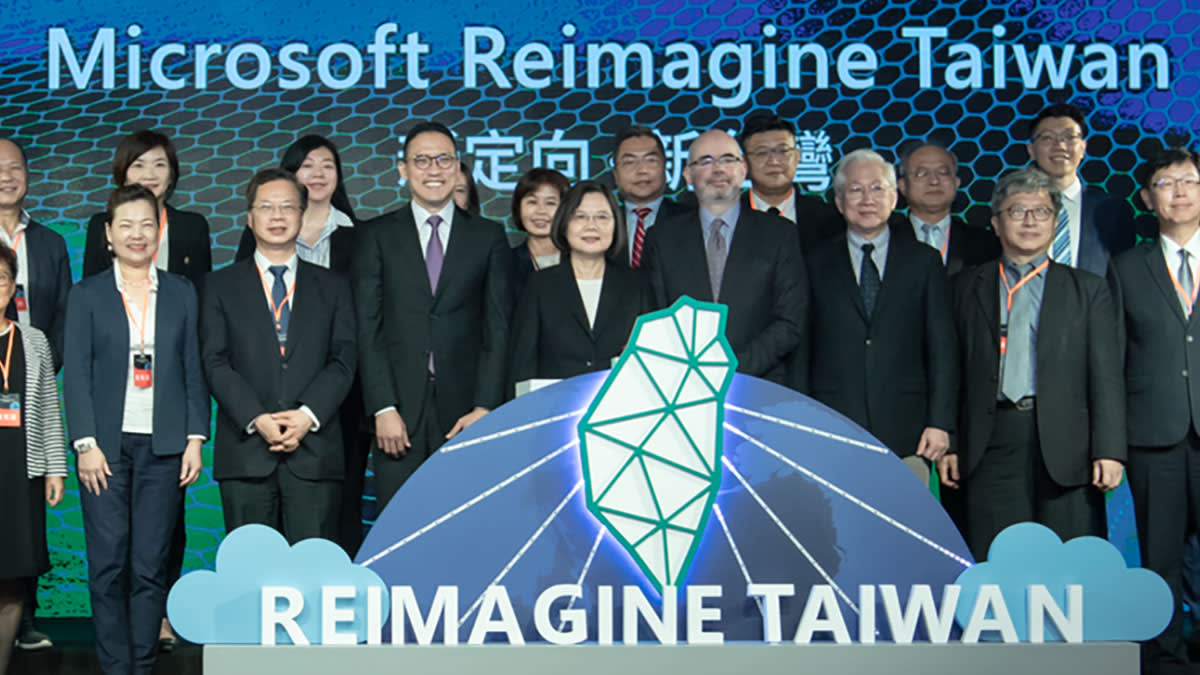 Microsoft announced it would build its first cloud-computing data center in Taiwan at an event attended by Taiwanese President Tsai Ing-wen on Oct. 26 in Taipei. (Photo courtesy of Office of the President in Taiwan)
LAULY LI and CHENG TING-FANG, Nikkei staff writersOctober 26, 2020 19:42 JST | Taiwan
CopyCopied

TAIPEI -- Microsoft is to make its largest investment in Taiwan by building its first cloud-computing data center there and turning it into a key Asia operating hub amid uncertainty created by an intensifying U.S.-China tech war.

The U.S. software giant said the company, which invests $1 billion in data and cybersecurity each year, will also work with Taiwan to enhance the security of the electronics supply chain.

"This is a very important day for Microsoft, as it is our biggest investment in Taiwan over the past 31 years of presence here," Microsoft Taiwan General Manager Ken Sun told a press conference. "Taiwan is a reliable partner to Microsoft as it has a complete information technology supply chain with resourceful talents. We also see cross-industry collaboration opportunities with semiconductors, telco, medical and other industries here."

Microsoft said its plans for its Azure cloud-computing business would help to create 30,000 direct and indirect jobs in Taiwan and generate some 300 billion New Taiwan dollars ($10.5 billion) of economic value by 2024.

The American software giant's announcement came a month after Google said it would build its third data center in Taiwan, a democratic-ruled island that China views as a part of its territory and has not ruled out using force to take over. Google cited the island's location as strategically suited for an Asian data transfer hub.

"Microsoft's investment marks a deeper collaboration between the U.S. and Taiwan" at a time of supply chain restructuring, Taiwanese President Tsai Ing-wen said at the press event. "Taiwan has an irreplaceable edge in terms of high-end hardware manufacturing, and we are a reliable, safe partner for the U.S. and other advanced countries. Microsoft's investment is key for us to enhance our collaboration with the international community and with the U.S."

Taiwan is looking to maintain a warm relationship with the U.S., which will have its presidential election in a week, amid escalating conflict over technology between the world's two biggest economic powers.

The Trump administration has launched an aggressive campaign to block China's tech advance, asking global suppliers to cut their reliance on the country. It has also introduced curbs on supplying Huawei, China's biggest tech company, and the use of Chinese cloud computing providers such as Alibaba Group Holding, which the U.S. views as posing security risks, as part of a "Clean Network" initiative.

Apart from Microsoft and Google, the Taiwanese government is also keen to lure Facebook to build its data center on the island, as a move to elevate Taiwan's strategic position for global tech groups and promote itself as the most reliable partner in the Chinese-speaking world.

The move by Microsoft to choose Taiwan for its new data center came only a few months after China passed a National Security Law for Hong Kong -- a step that some believe will reduce the attraction of the territory for data-heavy businesses.

Microsoft has more than 60 Azure data centers worldwide, with four in China and one in Hong Kong. Others in Asia include two each in South Korea and Japan, four in Australia, and one in Singapore.

"Microsoft is our partner. We will definitely have cooperation with them for their big investment in Taiwan. We might share more details about it in the coming investors' conference," Foxconn's Liu told reporters.

The iPhone assembler is also one of the top contract server builders in the world, with HP, Dell and Microsoft among its clients.

Along with the new data center, Microsoft will expand its Azure hardware systems and infrastructure team and make Taiwan its key research and development and operation hub in Asia in the next two years, according to the company.

In total, it could help Taiwan cultivate some 200,000 professionals in artificial intelligence and big data analysis segments, the U.S. company said.