Eclat decided to stop production in China in 2016 when it noticed that the investment environment was deteriorating and it was hard to find qualified workers.   © Reuters
CHENG TING-FANG, Nikkei staff writerNovember 24, 2018 12:02 JST | North America
CopyCopied

TAIPEI -- For Eclat Textile, a key apparel supplier to Nike and Lululemon Athletica, the ongoing trade dispute between Washington and Beijing could be a blessing for its business, as the leading Taiwanese sportswear maker ended its production in China at the end of 2016.

"We are receiving many queries from customers seeking to diversify production from China as they are keen to look for alternatives," Roger Lo, vice president of Eclat, told the Nikkei Asian Review, adding that this effect would likely make a contribution to the business from next year.

For the first 10 months of 2018, Eclat's revenue rose more than 16% to 22.72 billion New Taiwan dollars ($738 million), and is set to see healthy growth next year, Eclat Chairman Hung Chen-hai said. "We will continue to expand our production footprint in the next three years to places [outside China]."

But Hung was also concerned that the currently geopolitical uncertainties could darken the macroeconomic outlook and demand for 2019.

The company specializes in making high-end fabrics and turning them into sports clothing for brands including Nike, Lululemon, Under Armour, Polo Ralph Lauren, Victoria's Secrets and Adidas as well as retailers such as JC Penney, Kohl's and Target. 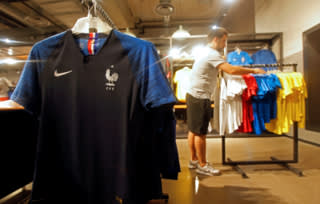 Eclat Textiles is specialized in making high-end fabrics and turns them into sports clothing for Nike, Lululemon, Under Armour, Polo Ralph Lauren, Victoria Secrets, Adidas as well as retailers   © Reuters

Eclat's bold decision to close its only factory in China, in the eastern city of Wuxi, and completely exit manufacturing in the country by December 2016 now seems like a wise choice, as fabrics have already been hit under the package of tariffs that the U.S. imposed on $200 billion-worth of Chinese imports in late September. The company's early investment and expansion in Vietnam and Cambodia made Eclat less vulnerable to the trade jousting between the world's two leading economies than its Chinese rival Shenzhou International Group Holding, for example. Currently, Eclat's production facilities are mostly in Taiwan and Vietnam.

Eclat had noticed a clear trend that the investment environment in China was deteriorating dramatically and it was extremely difficult to find qualified workers. Wages in China would be double those in Vietnam, while production efficiency was also better in Vietnam, Lo told the Nikkei Asian Review. "Shifting production out of China is a megatrend in the textile industry."

In the current global political climate, it is unlikely that textile makers would want to expand production in China or move forward investment there, while most buyers worldwide are looking for suppliers that can provide alternatives to goods bearing the "Made in China" tag, according to Lo.

However, a shift in production to the U.S. is not likely due to the incomplete supply chain there, Lo added. "If we go to produce fabrics in the U.S., we still need to ship these fabric materials to garment plants outside the country to make them into clothes... that's a problem."

Eclat in 2018 generated around 60% of revenue from North America, its top market. Europe accounted for 20% of the company's sales while Japan and Australia combined took about 10%.

Other Taiwanese peers, including Makalot Industrial, a key garment supplier to retailers like Gap, H&M, Zara and JC Penney, and Pou Chen and Feng Tay Enterprises, two leading footwear makers supplying Nike and Adidas, are all lowering their dependence on China for production.

On top of this, many local tech suppliers -- including Pegatron, Compal Electronics and Quanta Computer -- with deep roots in production sites in China, are considering shifting some production to Southeast Asia or back to Taiwan.

"Every business owner knows it's crucial to diversify production bases," Chen Mei-ling, minister of Taiwan's National Development Council, told the Nikkei Asian Review in a recent interview. "But it was not until this escalating trade conflict between the U.S. and China this year that we are seeing a very clear trigger that most companies are forging plans to at least move some production away from China to avoid further political risk."