TOKYO -- From Nintendo to Uniqlo operator Fast Retailing, Japanese companies have long established a supply chain centered on China, with many of the finished products exported to the U.S.

Now amid the prolonging U.S.-China trade war, many of those companies are at a crossroad. Already facing a sharp increase in Chinese workers' wages, the trade war has pushed at least a fourth of Japanese companies to consider reducing its China footprint, a Nikkei survey has found.

The results of the survey indicate that a substantial proportion of Japanese companies are preparing to restructure the international supply networks they have built over years, in anticipation of a widening rift between the two superpowers.

In a survey of 1,000 unit managers or higher executives at Japanese companies involved in business with China, 23.9% of respondents said they should scale back their China businesses amid the growing U.S.-China trade dispute.

Meanwhile, 60.4% of respondents said they would wait and see how the situation panned out while maintaining the status quo.

A deeper analysis of the "wait and see" group showed that respondents fell largely into two groups: those who had already felt that China was losing its competitive edge as the factory of the world and will refrain from new investment, and those who still believe that the country's 1.4 billion population offers a market too big to ignore. 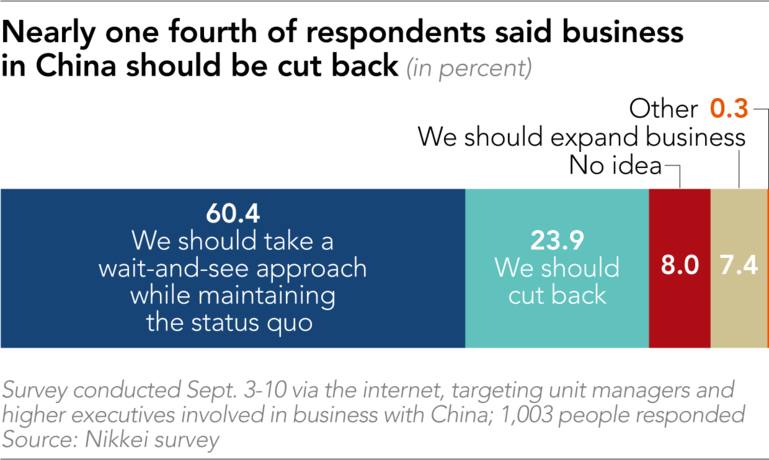 The administration of U.S. President Donald Trump started gradually imposing punitive import tariffs on Chinese products in 2018, escalating the trade dispute. Last month, it hit China with a fourth round of tariffs, on products including photocopiers and smartwatches.

Following the fourth round of tariffs, Nikkei and the Japan Center for Economic Research conducted this survey in early September.

Asei Ito, a University of Tokyo associate professor, said: "The respondents are taking a wait-and-see approach probably because they expect the dispute between the U.S. and China to be a drawn-out battle."

Game giant Nintendo is a prime example of a Japanese company relying on China production for the American market. Nintendo has outsourced production of its game consoles for the U.S. market to the world's largest electronics manufacturing services company Foxconn, also known as Hon Hai Precision Industry. The Taiwan-based company has a large production base in China.

According to a 2018 survey by the Japan External Trade Organization, 40% of Japanese manufacturers in China rely on exports from China for more than half of their sales. The U.S. was the second most important export destination after Japan, indicating that China has become a base for exports to the U.S.

However, if trade tensions continue in the longer term, the decoupling of the U.S. and Chinese economies will accelerate and the supply network between the two countries will be destroyed.

In July, imaging and electronics company Ricoh transferred the production of its photocopiers for the U.S. market to Thailand from China. Ceramics and electronics manufacturer Kyocera is moving its production in China to Vietnam. Fast Retailing, the operator of the casual clothing chain Uniqlo, will shift production in China to Vietnam and other countries in Southeast Asia, in preparation for the possibility of a protracted trade dispute between the U.S. and China.

Meanwhile, it is common for Japanese companies to continue producing products in China that are destined for that market. Separating production bases for the Chinese market from others is becoming more widespread. Prompting the change is a growing view that tensions between the U.S. and China are unlikely to ease anytime soon.

In response to a survey question over the length of the dispute, 51.3% of respondents said it was likely to last for a long period (over 10 years), compared with 25.8% who said it would last in the medium term (about five years) and 10.8% who estimated a short-term disruption (one to three years).

To a question about the roles of Hong Kong and Taiwan, which Japanese companies have long used as entry points to mainland China, many respondents said these Chinese territories would likely become less attractive to Japanese companies.

Those who said Hong Kong would become less attractive as a financial and trade center in the future accounted for 36.2% of respondents, the biggest group. The city has been plagued for months by massive anti-Beijing protests.

Similarly, 31.5% said it would be more difficult for Japanese companies to cooperate with Taiwan on the Chinese business front, as they believe Taiwan is becoming more independent. Although both Hong Kong and Taiwan have long been strong partners with Japan, the survey respondents were not yet able to decide how close their business relations should be going forward. The prolonged trade dispute between the U.S. and China is prompting Japanese companies to separate production bases aimed at the Chinese market from others.   © Reuters

China has developed its local industries on the back of robust domestic demand and expanded global market share in smartphones, mobile communication infrastructures such as base stations and home electronics. Chinese companies have already beaten Japan in many areas of manufacturing that used to be Japan's forte. For example, China's Contemporary Amperex Technology (CATL) is now the world's largest electric vehicle battery maker.

Thanks to abundant labor, China became "the world's factory" but soaring labor costs prompted it to make its industries more sophisticated. In 2015, the Chinese government unveiled the "Made in China 2025" industrial modernization strategy centering on the development of high-tech businesses. Beijing aims to boost the country's self-sufficiency in semiconductor technology to 40% in 2020.

The U.S. imposed an export ban to prevent American companies from selling to Chinese tech group Huawei Technologies. Some survey respondents believe the ban will deal a heavy blow to "Made in China 2025" but those who said China would be able to make sufficient achievements or make achievements in a number of fields amounted to 48.3%.

As for other challenges facing the Chinese economy, 44.8% of the respondents cited "the possibility of an abrupt economic slowdown" and 48.6% saw a possibility of the property bubble bursting.