SHENZHEN/TAIPEI/PALO ALTO, U.S./SEOUL -- Trade tensions are casting a shadow over the world's three big smartphone makers, even as they pin their hopes on the launch of next-generation 5G handsets to inject new life into a declining market.

Samsung Electronics, Huawei Technologies, and Apple -- who together control more than 50% of the market -- all bore the scars of escalating U.S.-China and Japan-South Korea trade tensions, as they announced quarterly results this week.

Samsung, the world's biggest smartphone maker, described "challenges ahead" due to Japan's clampdown on exports of crucial chip and display materials to South Korea. Huawei, which in the second quarter again surpassed Apple to become the world's second-largest smartphone maker, equally voiced concerns about the impact of U.S. restrictions on its access to U.S. technology.

Apple, meanwhile, was able to point to a return to growth in China from second to third quarter, but handset sales remain significantly lower than a year ago and the company continues to lose global market share. Overall its revenues from the iconic iPhone dropped nearly 12% from a year ago. Moreover, it continues to operate under the threat of tariffs as long as Washington and Beijing exchange blows in their long trade war.

There was a flash of good news on Wednesday when International Data Corporation's global smartphone tracker revealed the handset industry had seen its strongest quarterly performance in a year, with a decline of just 2.3% on the year. The figures, which showed Samsung and Huawei increasing market share, while Apple continued its recent slide, raised hopes that the steadily shrinking global smartphone market could be stabilizing.

But even in this context, the world's big three cannot relax.

"Apple faces challenges from weaker than expected iPhone sales volumes in China and other markets outside USA which stunts the growth of its user base, while for Samsung, the premium segment sales have been soft in key markets such as USA and Europe," Neil Shah, research director at Counterpoint, told the Nikkei Asian Review. "For Huawei, the U.S. trade ban has affected its smartphone business demand."

The big three are fighting against specific political and industrial headwinds even as they should be focused on winning the upcoming 5G battle and fending off those who might be coming up from behind. 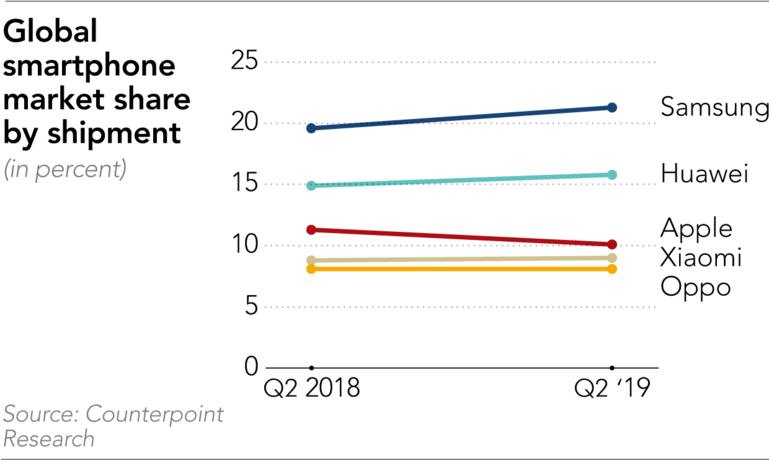 "When you look at the top of the market -- Samsung, Huawei, and Apple -- each vendor lost a bit of share from the last quarter, and when you look down the list the next three -- Xiaomi, Oppo, and Vivo -- all gained," said Ryan Reith, program vice president with IDC's Worldwide Mobile Device Trackers. "Part of this is related to the timing of product launches, but it is hard not to assume this trend could continue."

The battle is heating up as consumers prepare for the arrival of 5G -- the next-generation mobile network that will allow much faster data transfers and lower latency. This will enable augmented reality applications, autonomous driving, and artificial intelligence features, which the industry hopes will energize lackluster handset demand.

The big three still appear set to dominate the 5G market, with substantial resources to offer the most efficient cutting edge products. However with consumers in recent years clearly shunning the high-end of the market, 5G could also open a window for smaller smartphone brands such as China's Oppo, Vivo and Xiaomi to compete head to head with their bigger rivals.

The Chinese government is doing all it can to ensure the success of its domestic companies. It granted earlier-than-expected 5G commercial licenses to major carriers in early June, paving the way for China to race head-to-head with the U.S., South Korea, and Japan in the roll-out of the latest wireless network infrastructure. That also provides a ready market for domestic smartphone makers such as Huawei to introduce 5G devices. 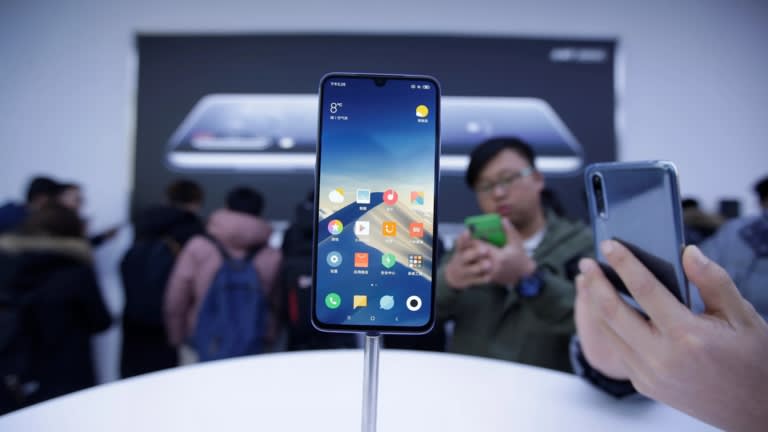 Xiaomi's flagship Mi 9 is displayed after its launch ceremony in Beijing in February.   © Reuters

MediaTek, the world's second-largest mobile chipmaker after Qualcomm which supplies major smartphone makers, predicts that there will be some 140 million units of 5G handsets in 2020 globally, of which it expects the Chinese market to account for some 100 million.

South Korea, too, is rushing to provide a strong domestic foundation for its own industry, dominated by Samsung. The country launched the world's first 5G mobile network in April to support Samsung's 5G smartphone rollout at home.

Apple, meanwhile, is lagging rivals such as Huawei and Samsung who have already launched 5G models. Its own next-generation handset is expected next year, having apparently been held up by delays in securing a supply of high quality 5G modems. Apple's decision to buy Intel's smartphone modem unit for $1 billion this month is a sign of the group's determination to acquire the advance wireless technology that will be crucial for the next round of competition.

From next year consumers will see a wide range of 5G smartphone options, with almost every player planning a launch. "It is clear that if you don't have a 5G lineup to introduce to the markets next year, you might as well not join the party at all, as everyone else is delivering at least one," said Jeff Pu, a veteran tech analyst at GF Securities.

However, there is the risk of disappointment.

"We still have a question mark over what exactly the killer experience of 5G smartphones will be for consumers beyond faster downloads," Pu said. "It appears to be a must-have feature next year, but not necessarily a blockbuster guarantee."

The advantages of faster downloads and lower latency that 5G will bring will also come at a cost.

Smartphones will have to be bigger to fit in additional components to support the technology. They will also require bigger batteries for the more power hungry devices. Finally 5G smartphones will need to be supported by well-built 5G infrastructure, which in the short-term may only be available in certain countries, or even certain parts of a country.

"We expect 5G can revive the market, but it can be expanded only when the network is available," Lee Chang-min, an analyst at KB Securities, told the Nikkei. "It won't change the market soon. It will take some more time."