Production shift out of China provides tailwinds to Malaysia, Vietnam and Thailand SINGAPORE -- Exports from major Southeast Asian countries to the U.S. are surging as manufacturers scramble to find alternative production bases not subject to Chinese tariffs, with continued growth in these exports likely.

Malaysia's exports to the U.S. increased 11.7% on the year to 7.8 billion ringgit ($1.88 billion) in May, according to Malaysian government figures out Thursday. This more than offset a 2.2% drop in exports to China, contributing to a 2.5% gain in exports overall.

Foreign-owned semiconductor and electronics plants abound in the northern state of Penang and on the outskirts of Kuala Lumpur.

"Multinationals are switching their production sites from China to Southeast Asia to avoid punitive tariffs," said an official at a local branch of a Japanese bank.

This adjustment in production operations by global companies is softening the blow of the flagging Chinese economy in Malaysia, where a third of exports are related to the electronics industry. 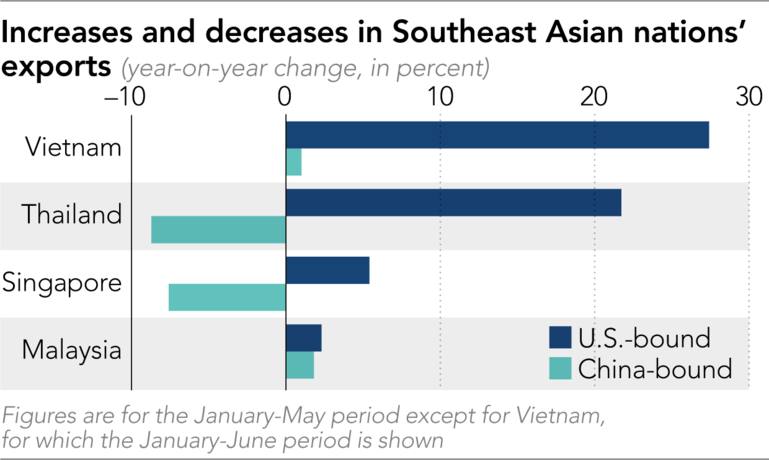 The same pattern is found in other countries. Exports from Thailand to the U.S. increased by 7.8% in May to $2.62 billion thanks to strong shipments of computers and their parts. Singapore's nonoil exports to the U.S. grew in value terms for a fourth straight month, while those to China fell by double digits.

Prolonged trade frictions between Washington and Beijing hurt Southeast Asian economies, which are bound to China by tightly linked supply chains. But countries in the region are finding that the pluses that come from serving as alternative export bases to China outweigh the minuses from supply chain disruptions.

Simulations by the Mizuho Research Institute point to Vietnam as the biggest beneficiary from so-called export substitution in the event of a full-scale Sino-American trade war, with a 7.1% net increase in its exports. The net boosts will exceed 1% for Malaysia and Thailand, the institute predicts.

HP and Dell are looking to move up to 30% of their notebook computer production out of China. As such adjustments by global manufacturers continue, Southeast Asian economies stand to reap even greater rewards.