Electronics supply chains caught in the middle of US-China tiff

TOKYO -- The mounting trade tensions between the U.S. and much of the rest of the world are taking a toll on markets as investors fret about the impact on corporate earnings and consumer spending.

Stocks worldwide have shed $2.5 trillion in market capitalization since Feb. 15, the day before the U.S. announced tariffs on steel and aluminum, falling to roughly $78 trillion. The value of global stocks has tumbled more than $7.2 trillion from the late-January peak, owing partly to rising interest rates in the U.S. making for a less-friendly macroeconomic environment.

Many market players had assumed at first that U.S. President Donald Trump was bluffing with his protectionist rhetoric and threats. But Washington made good on its threat of steel and aluminum tariffs and is poised to pull the trigger on other duties, provoking responses in kind from China, Europe and others. The European Union on Friday slapped tariffs on a range of American imports, prompting Trump to threaten a 20% levy on European autos.

Raising tariffs discourages purchases of otherwise cheap imports, putting upward pressure on prices. This could have a negative economic impact regardless of whether the burden falls on consumers or businesses, said Raymond Ma, a China analyst at Fidelity International.

Companies facing an uncertain trade policy outlook may also choose to hold off on making investments in the U.S. or China, such as building factories.

Even Asian markets not directly embroiled in the trade war look likely to get caught in the crossfire, given their key role in supply chains for Chinese goods targeted by U.S. tariffs, such as semiconductors and electronic components. About a third of the parts for products assembled in China for export to the U.S. are produced outside China, including in Japan, South Korea and Taiwan, according to the Mizuho Research Institute.

The trade tensions drove stocks lower Friday in Asian markets including Taiwan, the Philippines and Singapore. Though the Shanghai Composite Index ended the day up 0.5%, it remained below the psychologically important 3,000 mark. The Nikkei Stock Average retreated after two days of gains.

The Dow Jones Industrial Average edged up 0.49% on Friday thanks to rising oil prices, snapping an eight-day losing streak. Shares of Singapore-based contract electronics manufacturer Venture have slumped nearly 40% from their year-to-date high in mid-April on concerns that the trade row will harm a company that gets much of its business from China and the U.S. CEO Wong Ngit Liong has said that Venture will consider producing parts or products outside China if customers advise it to do so.

The Philippines' PSEi index has fallen 18% since Feb. 15 -- almost as much as Turkey's benchmark index, which has been buffeted by a plunging lira. American stocks also edged down over that period amid worries that a trade war will rebound on the U.S. economy. Japanese equities gained thanks to a soft yen shoring up exports.

Rising U.S. interest rates have put upward pressure on the dollar, spurring an outflow of funds from emerging markets. The MSCI Emerging Markets Currency index, which tracks the performance of a basket of these currencies against the dollar, sank as far as 1,637 at one point Thursday -- a seven-month low.

Commodities markets have not been left untouched. The tariffs on Canadian aluminum have left the metal in shorter supply in the U.S., where the spot premium over futures prices has doubled from a year earlier to nearly $500 per ton.

Spot premiums may also rise in Japan, potentially eating into automakers' margins. Anglo-Australian miner Rio Tinto and Alcoa of the U.S. have quoted premiums of $150 to $160 in negotiations with manufacturers and trading houses for the July-September quarter.

Futures prices for soybeans, which have been targeted by Chinese tariffs set to take effect next month, at one point sank to a nine-and-a-half-year low in Chicago. 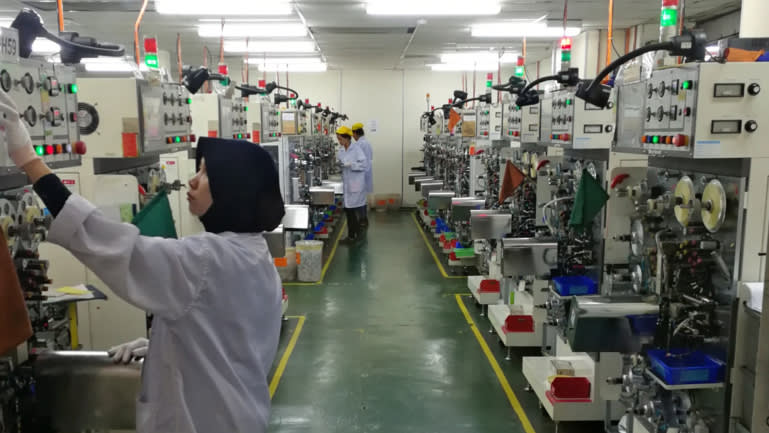 Asian countries form a crucial part of the supply chain for many of the Chinese electronics the U.S. has slapped with tariffs.

Some China watchers suspect that Beijing is guiding the yuan lower in response to the trade tensions. The People's Bank of China set the daily reference rate for the currency at 6.4804 to the dollar Friday, the weakest in five months and closer to this year's low of 6.5207.

The central bank sets the daily fix -- the midpoint for that day's trading -- each morning based on such factors as reports from banks. But recent reference rates have been set lower than market conditions warrant, some analysts argue.

The yuan had strengthened to the 6.2 range in April, but the recent softening has wiped out nearly all its gains for the year. The currency slid to 6.5 against the greenback during trading Friday.

China's retail sales growth has slowed to single digits, and fixed-asset investment has lost momentum as well. Beijing is believed to be encouraging a softer currency to boost exports, aiming to mitigate the impact of the trade row as well as show Washington that it will not fold easily.

But this could have unintended consequences, especially in an already unstable market. China suffered an exodus of capital and a stock market crash after it devalued its currency in 2015, and Shanghai stocks are now hovering around their lows for the year.