BEIJING -- China's official manufacturing purchasing managers' index slumped in September to the lowest non-holiday level in two years, an indicator that the trade war with the U.S. has begun to bite.

The gauge of manufacturing activity fell 0.5 point from August to 50.8, government data released on Sept. 30 shows -- just above the boom-or-bust threshold of 50, and below the average analyst forecast of 51.2. This represents the slowest growth since September 2016, excluding months affected by the Lunar New Year holiday.

The subindex for new export orders came in below 50 for a fourth straight month, dropping 1.4 points to 48 -- a level last seen in February 2016, when the Chinese market was rattled by a plunging yuan. This signals a future slump in exports, said Zhang Liqun, a research fellow at the Development Research Center of China's State Council.

The data showed output contracting in areas such as machine tools, furniture and nonferrous metals. Many of the industries experiencing slowdowns were hit by the tariffs on $250 billion worth of Chinese goods that the U.S. enacted between July and September.

The Caixin/Markit PMI released the same day fell 0.6 point to 50, the lowest since May 2017. Unlike the official gauge, which focuses on large state-owned enterprises, this survey includes many private-sector exporters, giving a clearer picture of the trade war's impact. 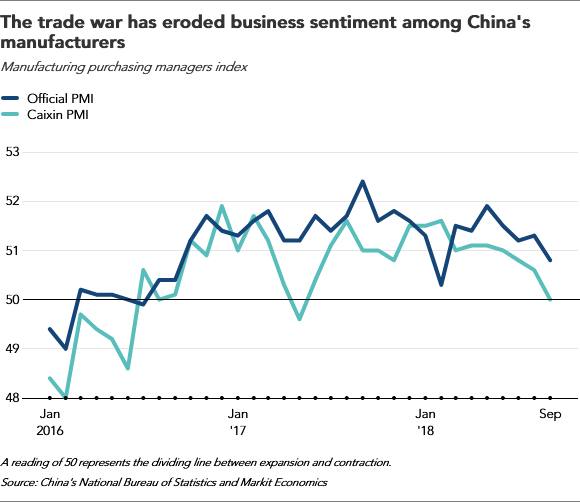 Job-related data provides cause for concern as well. The official employment subindex slid 1.1 points to 48.3, the lowest reading outside the Lunar New Year since July 2016. The slump in exports, on top of a tougher regulatory environment and a deleveraging push that has made fundraising tougher, is driving more private-sector companies into bankruptcy.

Speaking to business representatives in Zhejiang Province on Sept. 28, Premier Li Keqiang pledged to ease regulations further and cut taxes and fees. Beijing is looking at lowering and simplifying the value-added tax as well as reining in electricity and shipping rates, he said.

The government enacts changes to the income tax code on Oct. 1 and in December that will reduce annual revenue by a total of 320 billion yuan ($46.6 billion). It likely plans to lighten the tax burden on businesses as well in order to protect jobs.

"The important thing is how to respond effectively to the trade war," Long Guoqiang, deputy head of the Development Research Center, told reporters on Sept. 30, adding that the government already has taken many measures to ensure the country can cope with this difficult period.

Beijing has stuck to fiscal stimulus so far, mainly in the form of tax cuts. Asked about monetary policy measures, Long said policy likely will remain on its current course.

The trade friction "has not yet had a significant macroeconomic impact on China," he said.