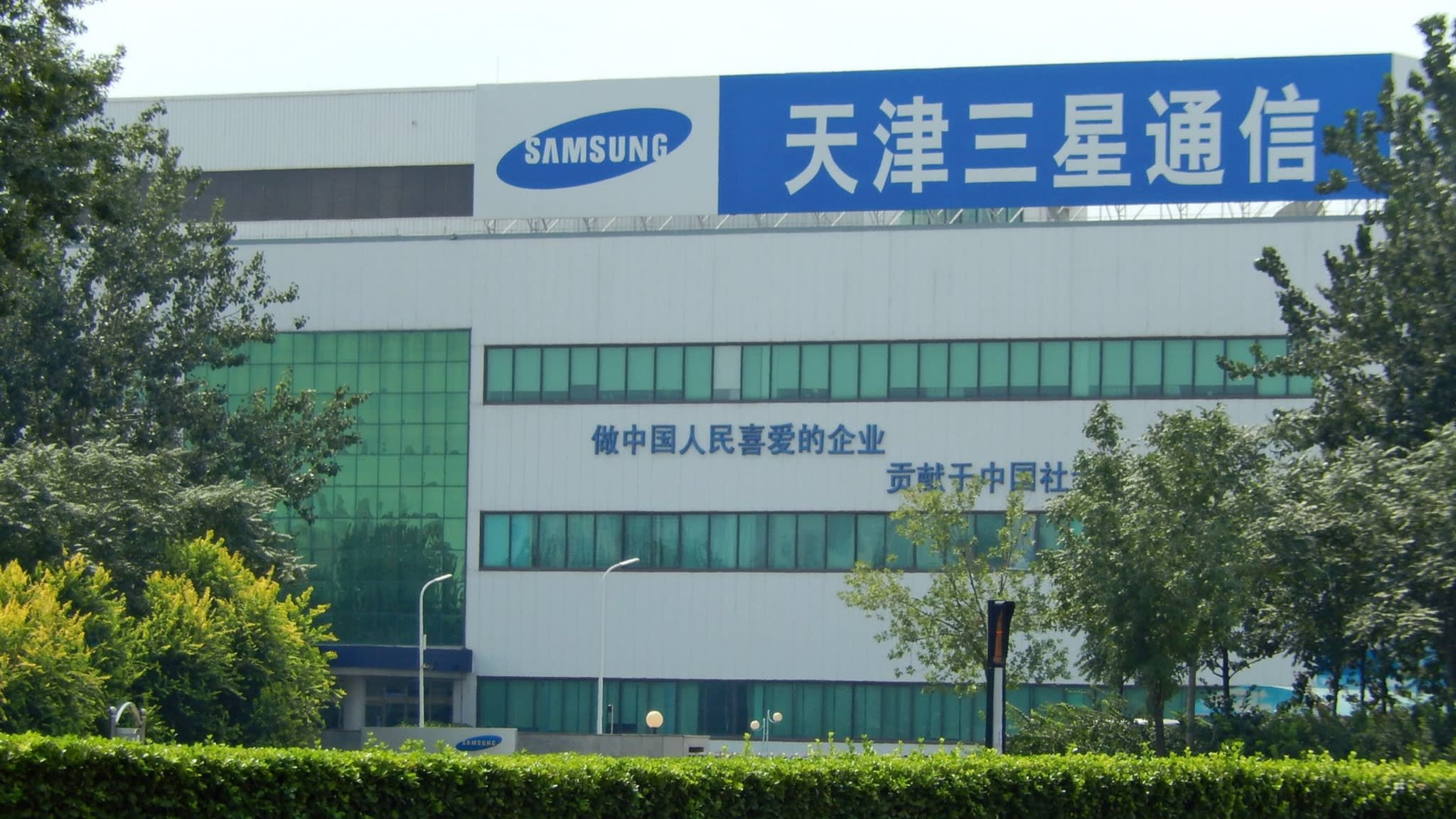 Samsung Electronics has long had trouble selling smartphones in China. Now, with a tariff war taking place, it will have a hard time selling the displays that it makes at this factory in Tianjin to Americans.
ISSAKU HARADA, Nikkei staff writerSeptember 24, 2018 15:51 JST | China
CopyCopied

TIANJIN, China -- It has been more than two months since the U.S. and China imposed their first round of tariffs on each other's exports, and statistics are beginning to show the impact on China's economy.

So far, the effects have been moderate.

But this northern port city seems to be suffering a real blow.

The Microelectronics Industrial Park has been home to factories operated by Samsung Electronics and its component makers. Samsung makes organic light-emitting diode panels and other smartphone parts in the industrial park. But South Korean media recently reported that Samsung may withdraw its operations from the city, perhaps by the end of the year.

On a recent day, Samsung factories in Tianjin seemed to be still operating. Buses that ferry workers back and forth were parked on the site. But the industrial park as a whole was quiet, its streets empty.

Indeed, a number of production sites, other than Samsung's, have already closed. "This factory used to supply camera components for Samsung smartphones," a security guard standing at the gate of one of the closed factories said. "But it shut down in the spring." The streets, parking lots and factories at the Microelectronics Industrial Park are still.

Samsung has already told the Tianjin government of its intention to withdraw from the industrial park, according to a city official.

The retreat likely was a long time in the making. Samsung's share of China's smartphone market has fallen to near zero. But the expanding U.S.-China trade war might have been the final push.

The pullout also shows that this port city's trade-led economy is in trouble.

Tianjin's gross domestic product for the first half of the year grew a real 3.4%. This was the second lowest rate among China's 31 provinces, provincial-level cities and autonomous regions.

Once a leading driver of China's economic growth, Tianjin now lags behind. Used to being fed large investment projects by Beijing, the city has done little to advance its manufacturing sector or nourish online businesses.

Earlier this year, the municipal government carried out some economic reforms, but to no avail. The timing could not have been worse, a city official said, referring to the then-looming game of tariff one-upmanship between the world's two largest economies.

"The amount of cargo at Tianjin ports remains stable, but largely due to last-minute orders placed just before the additional tariffs took effect," the official said.

Having large ports, commerce accounts for nearly 40% of Tianjin's GDP, compared to the national average of 34%. This makes the city more susceptible to trade slowdowns.

The situation is even worse in the bayside Binhai New Area, the city official said.

Japan's Isetan Mitsukoshi operates a four-story department store there. The fourth floor is now closed, and the third floor has been turned into a game arcade. Another four-story shopping center is home to fewer than 10 shops.

In an industrial area where luxury cars imported by the parallel market are sold, high-end models are selling for at least 400,000 yuan ($58,320).

The automobile sector is apparently the most affected by the trade war. Chinese President Xi Jinping in April announced plans to lower the 25% duties on imported cars, suggesting a willingness to give overseas players an opening into China's market. But U.S. President Donald Trump did not appreciate the measure and escalated the tariff fight.

"German automakers have been hit hardest," an imported car dealer said. This is because the large models with Mercedes-Benz, BMW and other German nameplates that make their way to China are mostly made in the U.S.

As the German marques suffer, the British brand Land Rover could get a boost; most of its cars are made in Europe and will thus become more affordable.

The American-made cars the dealer currently sells arrived before duties were raised to 40%. The dealer and his competitors had rushed to secure a large number of U.S.-made cars in the five days before July 6 (tariffs on imported autos were lowered to 15% on July 1).

These days, dealers who sell cars made in the U.S. are in wait-and-see mode. "The process to import a car typically takes almost three months," the dealer said. "I hope that relations between the two countries improve within three months."