WASHINGTON/BEIJING -- With the U.S. and China imposing fresh tariffs on each other and U.S. President Donald Trump threatening to expand levies to the entirety of Chinese imports, finding a solution to the U.S.-China trade war looks to be a daunting task.

While both sides are exploring the possibility of a top summit between Trump and Chinese President Xi Jinping at November's Group of 20 summit in Argentina, the spat could carry over into next year if the two leaders cannot come to an agreement.

"Hopefully, this trade situation will be resolved, in the end, by myself and President Xi of China, for whom I have great respect and affection," Trump said in a statement on Sept. 17, calling on Xi and the Chinese leadership to "take swift action" to end the country’s unfair trade practices.

Beijing's retaliatory tariffs are biting some of Trump's core supporters, the farmers in the U.S. Midwest. Treasury Secretary Steven Mnuchin and Commerce Secretary Wilbur Ross have repeatedly reached out to Chinese counterparts in hopes of breaking the deadlock, a Treasury Department official said.

The tariffs have also begun taking a direct hit on consumers' wallets. Washington's fresh 10% duties on $200 billion worth of Chinese goods Monday include everyday items like furniture and appliances, while China's retaliatory tariffs on $60 billion of goods target liquefied natural gas amid increasing demand for the fuel. 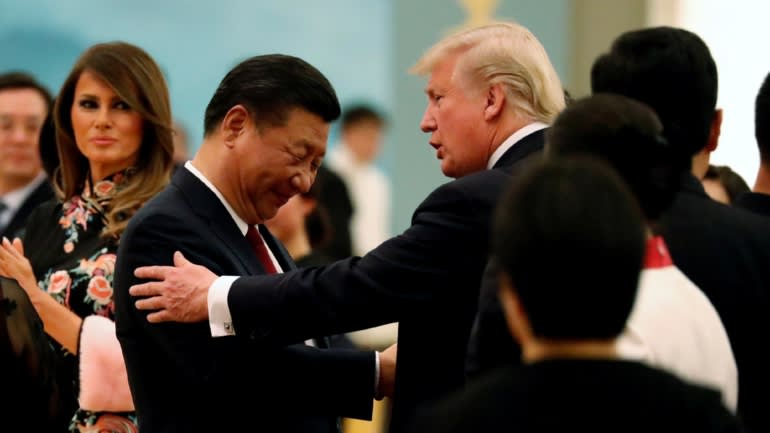 The U.S. and China hope Presidents Donald Trump and Xi Jinping can defuse the trade war in person.   © Reuters

This weekend, a woman in the U.S. state of Connecticut shopped for a bicycle at Walmart, saying she was hoping to get one as a Christmas gift for her daughter before prices went up.

Of Walmart's $500 billion in annual sales, around a tenth are products made in China. The small-sized refrigerators up for sale in the Connecticut store, as well as storage items and travel bags sold under Walmart's private-brand are all subject to the new round of tariffs imposed by the Trump administration.

At an IKEA store in the suburbs of New York, frequent customer Assit Jossy said she now checks to see if the furniture is made in China. While the Swedish chain is known for its Scandinavian style, roughly 20% of their products come from China.

Meanwhile, a taxi driver in the inland Chinese city of Chongqing said he would "be in trouble if the U.S.-China trade war causes natural gas prices to rise." About 100,000 vehicles in the city, including taxis, run on natural gas, stirring fears that Beijing's retaliatory tariffs could squeeze profits.

Xi's administration likewise wants to avoid a drawn-out trade war, which would harm exporting companies. The State Council, China's government, on Monday claimed "China has kept the door to negotiations open" in a white paper on trade frictions with the U.S., according to the official Xinhua News Agency.

Still, Chinese officials remain wary, concerned that even if an agreement were to be reached with U.S. cabinet officials, Trump himself could overturn it. In May, Chinese Vice Premier Liu He agreed with Mnuchin to suspend tariffs, but the U.S. president overrode it shortly after.

The matter probably can only be settled through top-level talks between Xi and Trump, one person related to the negotiations said. With Trump having recently canceled plans to attend other Asian summits that could have provided venues for the two to meet, eyes have shifted to the Buenos Aires G-20 meetings from late November to early December.

Some Trump administration officials oppose letting China off easy, however. Robert Lighthizer, the U.S. Trade Representative, takes a dim view of the Made in China 2025 initiative, through which Chinese authorities are pouring heavy subsidies into elevating the domestic manufacturing industry. The U.S. manufacturing sector is also wary of Chinese efforts to aid exports with government funds and purchase American companies that possess advanced technologies.

China views the 2025 initiative as a crucial part of its effort to upgrade core industries and become a mightier nation. "Negotiations cannot be conducted... at the cost of China's rights to development," Monday's white paper said.

In May, Lighthizer suggested it would take a year to find solutions to such issues.

Failure to reach an accord could have a major impact. Should China's economic growth slow to the 5% range -- it was 6.9% for calendar 2017 -- it would likely cause more businesses to go bankrupt and send tremors through the yuan and financial markets. The trade war could also exacerbate a potential U.S. economic slump many expect to set in around the second half of 2019, after the effects of a set of tax cuts last year wear thin.