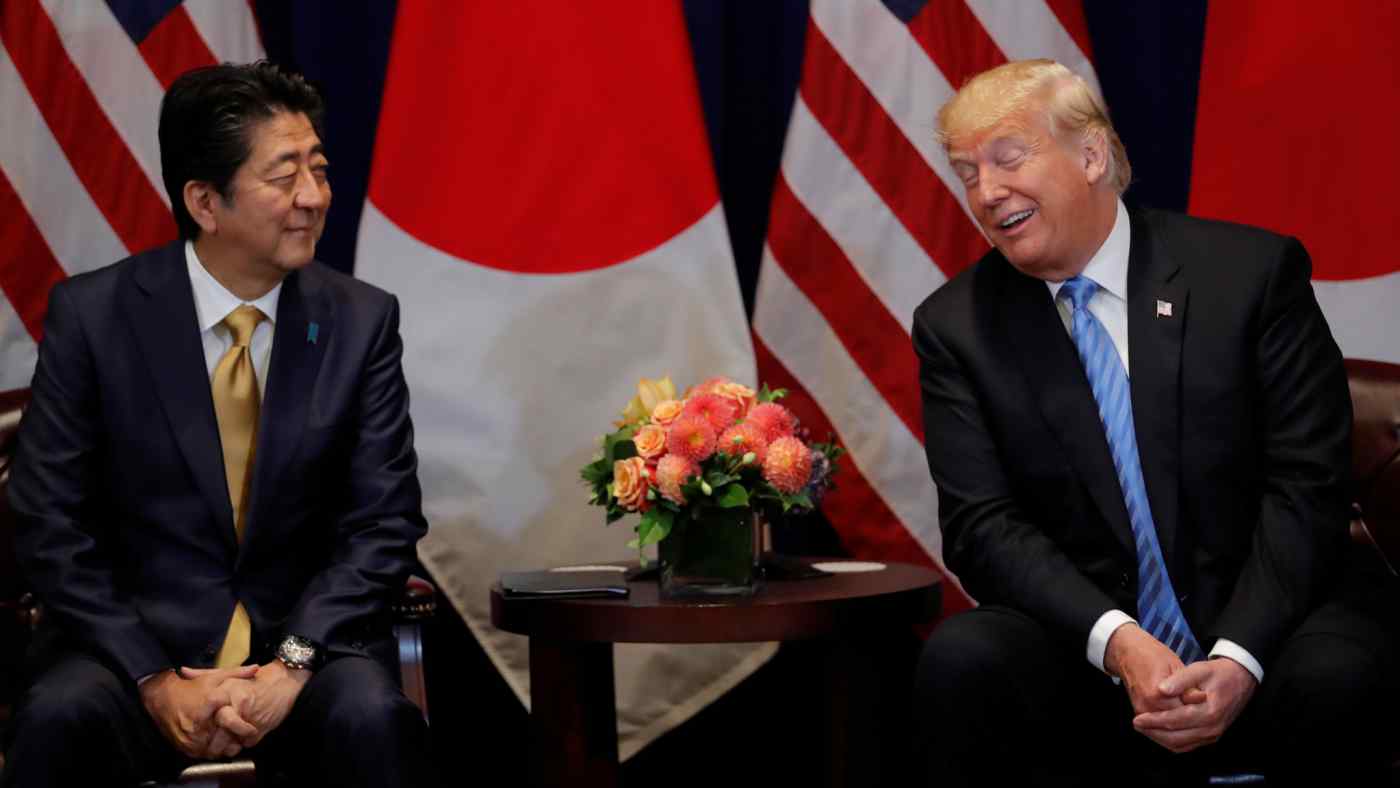 TOKYO -- In a room at the Lotte New York Palace Hotel in Manhattan on Sept. 26, Japanese Prime Minister Shinzo Abe pressed U.S. President Donald Trump for assurance that he would spare Japan from Washington's threatened additional tariffs on automobiles.

"Oh, no," the president replied, prompting a gasp from the Japanese delegation. But this was but a buildup to the answer Trump had planned all along. If it were another leader, the answer would have been no, but in light of their friendship, the president told Abe, he would make an exception, according to a senior Japanese government official who attended the meeting.

Though the joint statement on bilateral trade talks released after the summit might have suggested otherwise, this was the one time the two leaders touched on Japan-U.S. trade in their 75-minute meeting.

Trump's attention was instead fixed firmly on China. If Washington confronts Beijing head-on, the U.S. will win, because of the strength of the American job market and economy, he asserted. The president expressed a determination to see out the confrontation with the Chinese leadership, according to the source.

The choice of focus apparently stemmed from a keen awareness of the midterm congressional elections coming up in November. A Gallup poll released in July found that 71% of Republican supporters and 57% of Democrat supporters considered China's trade practices unfair, while just 41% and 27%, respectively, said the same of Japan's.

Trump emphasized his friendship with Abe, repeatedly calling him a "genius." The U.S. leader contrasted their relationship with his fraying ties with Chinese President Xi Jinping, with whom Trump said he might not be friends anymore.

The American president also thanked Abe for being the only one to have his back when he clashed with Canadian Prime Minister Justin Trudeau at a Group of Seven summit in June.

"We can build factories in Pennsylvania -- Japanese factories," he said. Trump seemed pleased by the proposal, saying he might put it in a speech. The Rust Belt state of Pennsylvania went for Trump in 2016, but certain polls show some congressional seats now held by Trump's Republican Party potentially turning Democratic in the midterms.

Abe also mentioned plans for high-speed rail in Texas that could be completed in four years -- "during your second term, Donald," he said. He noted Japanese investment in Ohio, Louisiana and Nevada -- all swing or Republican-leaning states.

The Japanese leader pointed out that Tokyo's purchases of U.S. defense equipment had doubled compared with Barack Obama's second term, playing to Trump's fondness for being compared favorably with his predecessor.

Speaking to reporters after the meeting, Trump took credit for Japanese plans to double LNG imports from the U.S. "I said, 'You have to do me a favor. We don't want these big deficits. You're going to have to buy more,'" he said.

The joint statement released after the meeting gave the green light for negotiations toward a bilateral "trade agreement on goods." The term, chosen nearly a week before the summit, was proposed by Economic and Fiscal Policy Minister Toshimitsu Motegi, Japan's point man on trade talks. Such other options as "new trade agreement" and "goods trade agreement" were rejected as sounding too similar to the "free trade agreement" Abe had pledged to avoid.

The U.S. likely agreed to a more limited deal than it had originally sought in part because of its trade war with China. Beijing's retaliatory tariffs on such agricultural products as beef and pork have upset American farmers. Trump hopes to win them over again by persuading Japan to open its markets further. The National Pork Producers Council welcomed the Sept. 26 accord as "fantastic news."

But the actual talks are far from guaranteed to go smoothly.

Shortly before the Sept. 26 summit, Motegi and U.S. Trade Representative Robert Lighthizer met at the New York office of the Japan External Trade Organization. The hour-and-a-half-long discussion was conducted almost entirely in English.

Lighthizer insisted that the joint statement to be released by Trump and Abe include a concrete target for reducing the U.S. trade deficit with Japan, with Tokyo potentially facing higher tariffs if the imbalance failed to improve. Motegi objected to the idea of governments making such pledges, arguing that trade is carried out by the private sector rather than countries.

The Japanese representative ultimately persuaded Lighthizer that Trump was interested less in specific numbers than in increasing investment and employment. The two agreed to insert a provision stating that "market access outcomes in the motor vehicle sector will be designed to increase production and jobs in the United States."

"We broke into a cold sweat because this seemed like a preview of how future negotiations would go," a source involved in the negotiations recalls.

Full-fledged talks are expected to begin early next year, after the midterms. The fate of the Shinzo-Donald bromance will hinge on how the geopolitical winds shift.