Negotiations on tariffs and deficit begin next year, with shape of eventual pact unclear 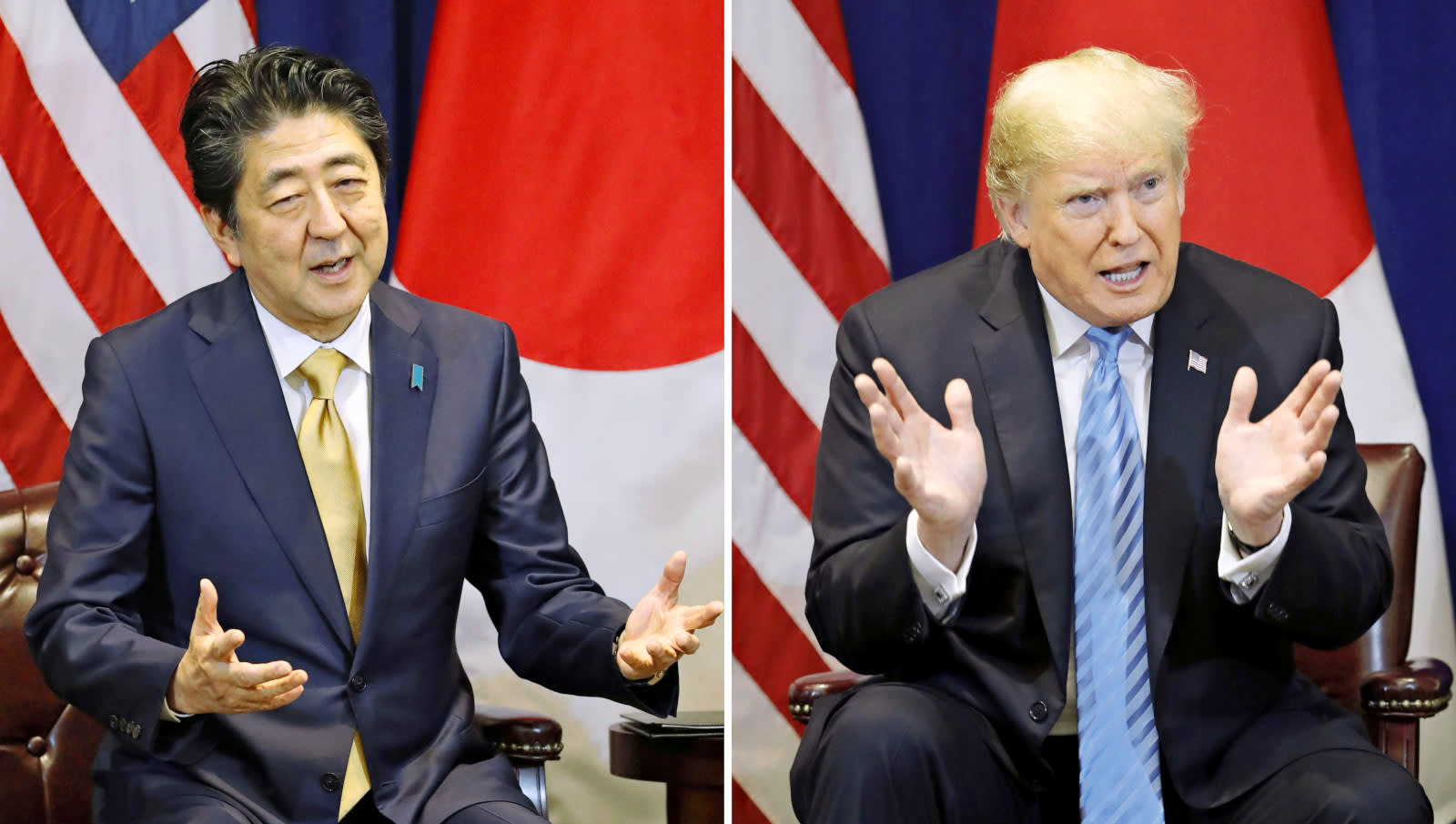 NEW YORK -- The accord on bilateral trade talks reached on Wednesday by Japanese Prime Minister Shinzo Abe and U.S. President Donald Trump represents progress on a contentious issue, but the two sides still have many gaps to bridge, including even the nature of any eventual pact.

"Thank you for exempting section 232," Abe said to Trump as they ended their 75-minute bilateral meeting at a New York hotel.

"Shinzo, it's our friendship," the American president replied, looking satisfied at their achievement.

Abe was referring to a section of the Trade Expansion Act, on which a 25% additional tariff on cars would have been based. The law allows the president, through tariffs or other means, to adjust imports of goods or materials from other countries if they pose a threat to national security.

Avoiding auto tariffs, albeit temporarily, was the one issue the Japanese leader could not budge on. Leaders of the Japanese auto industry had told the prime minister's office that a 25% tariff would lead to a management crisis at the companies.

With the auto issue solved, Japan agreed to accept the bilateral trade talks that it had long opposed. The two sides will enter negotiations toward a "United States-Japan Trade Agreement on goods" under which tariffs on imported goods will be reduced or removed.

The U.S. side seeks to reduce the trade deficit with Japan, as well as increase production and jobs in the American motor vehicle industry.

The two sides will decide on which areas to put on the agenda through cabinet-level discussions as early as this year, and are expected to officially begin negotiations in early 2019.

U.S. Trade Representative Robert Lighthizer told reporters on Wednesday that he will notify Congress to start talks under "fast-track" authority. Negotiations can begin no sooner than 90 days after this step, likely putting the start after U.S. midterm elections in November.

There are no more secret agreements on trade or investment beyond what was laid out in the joint statement released by the two leaders, Japanese Chief Cabinet Secretary Yoshihide Suga said Thursday.

The maneuvering between Trump and Abe began on Sunday when they dined together at Trump Tower, accompanied by just their interpreters -- a rarity, as such dinners typically are also attended by cabinet members.

The initial plan was to hold the meeting at a restaurant in Trump Tower, but Trump's invitation moved it to his residence there. That location holds a special significance, being the place where Abe became the first world leader to meet with Trump in person after his election.

Trump spent the majority of the meal discussing the North Korea issue ahead of his hoped-for second meeting with leader Kim Jong Un. Even when the discussion turned to trade, he focused on China. For all his public tough talk on Japan, he barely said a critical word about Tokyo at the dinner, giving Abe no reason to turn to the trade-related comments he had prepared in advance.

"We can work with this," Abe told his office by phone after the dinner, expressing confidence that Trump would not go back on agreements that working-level officials had hammered out.

The seven-item statement announced on Wednesday stipulates that the two countries will enter into negotiations for trade agreement on goods. Lighthizer said he expects early results within a few months.

The statement also says that both sides will "refrain from taking measures against the spirit of this joint statement during the process of these consultations." The Japanese side understands this to mean that the country will be exempted from additional duties on imported autos threatened by Trump while talks are ongoing.

Despite the agreement, the two sides seem to differ on one crucial point.

The negotiations will cover just trade in goods, Abe told reporters in New York on Wednesday, stressing that the aim is something completely different from the comprehensive free trade agreements Japan has signed before with other countries. Suga said any deal would not constitute a comprehensive free trade agreement, as it would lack rules governing investment and services.

Yet Lighthizer said the same day that after an "early harvest" on cutting tariffs and lowering other trade barriers, Washington will aim for a full-fledged free trade pact, Reuters reported.

Tokyo is referring to a "trade agreement in goods" because some officials would rather avoid the words "free trade agreement," a government source familiar with the situation said.

Japan's duties on agricultural products will be a focal point of the talks. Wednesday's joint statement stipulates that the outcomes "reflected in Japan's previous economic partnership agreements" -- in other words, the Trans-Pacific Partnership -- "constitute the maximum level" of market access it will offer in that area.

Whether the U.S. will accept these terms for its powerful agricultural sector once negotiations actually begin is unclear.

Tokyo "sacrificed the farming sector to avoid the auto tariffs," a senior official at a Japanese agricultural industry group said, adding that "farmers will be furious."

But Tokyo achieved its top priority of heading off the threatened auto levies. Akio Toyoda, chairman of the Japan Automobile Manufacturers Association and president of Toyota Motor, said he "welcomes" this development.

Yet as is the case with the U.S. talks with Europe, the threat has not been completely eliminated, a Japanese government negotiator warned.

Depending on how the talks go, the Trump administration could look to put pressure on Japan over autos again. Wednesday's joint statement says that U.S. "market access outcomes in the motor vehicle sector will be designed to increase production and jobs in the United States."

Shares in Toyota, Nissan Motor and Honda Motor all declined on Thursday. Nobuyuki Kashihara of Asset Management One cited "concern that automakers will be forced to increase production or employment in the U.S."