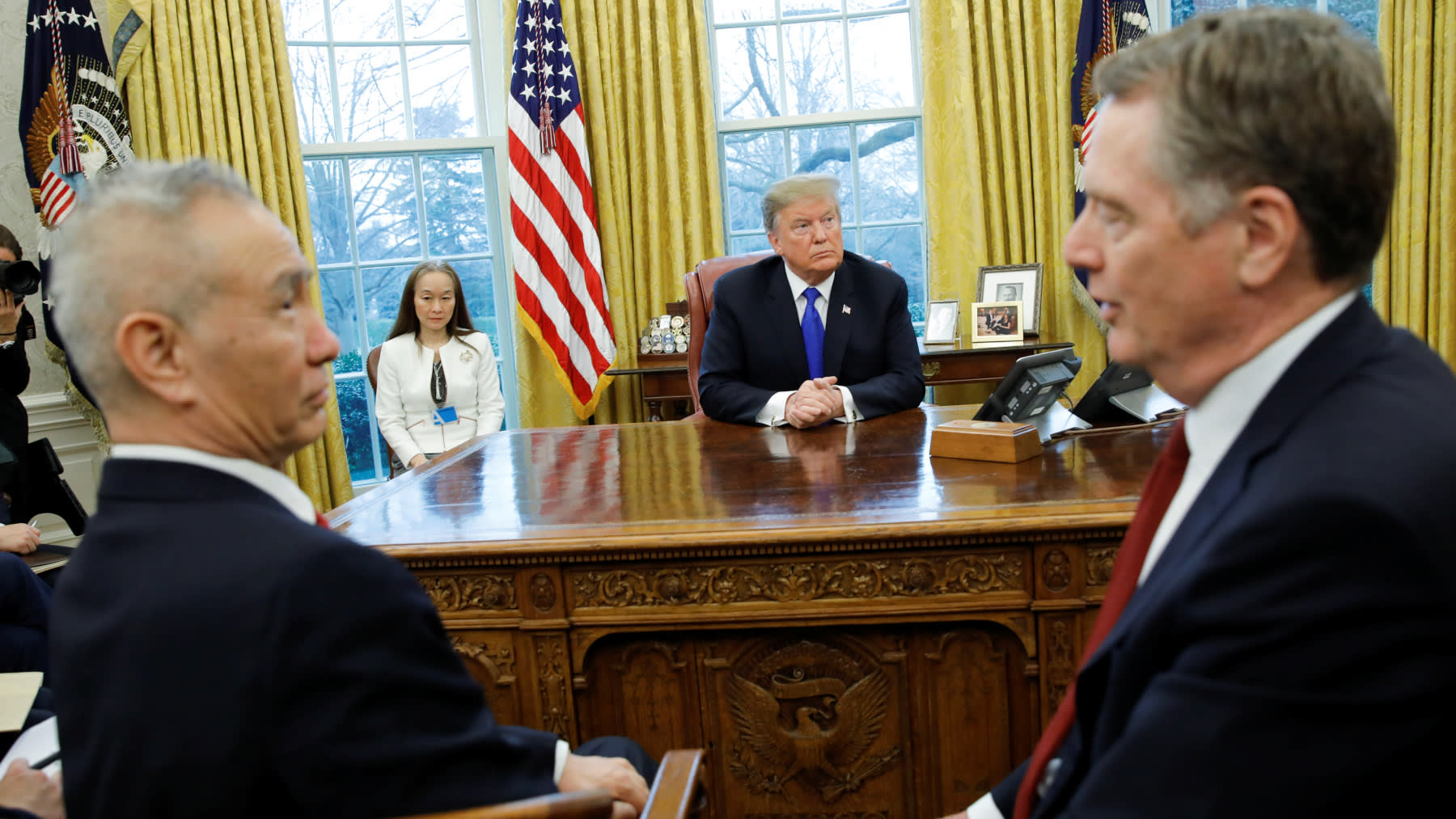 Speaking to reporters as he met in the Oval Office with China's lead trade negotiator, Vice Premier Liu He, Trump said that "ultimately, I think the biggest decisions, and some even smaller decisions, will be made by President Xi and myself."

He said that he will "probably" meet Xi in March at his Florida estate Mar-a-Lago. He said that it's "more likely that a deal will happen" than not.

Liu, following Trump's remarks, said through an interpreter that a deal is "very likely" to happen, and that "the Chinese side is ready to make our utmost effort."

The White House visit came after two days of high-level trade talks in Washington this week. The two sides will extend the talks by two days and continue the dialogue over the weekend.

In the high-level trade talks, led by Liu and U.S. Trade Representative Robert Lighthizer, China promised to increase purchases of American goods by over $1 trillion. Beijing also agreed to stabilize its currency, the yuan. Trump said that he was prepared to extend the March 1 deadline for negotiations.

During the White House meeting, Trump appeared at odds with his lead negotiator over the memorandum of understanding that Lighthizer was hammering out with his Chinese counterparts.

"I don't like MOUs, because they don't mean anything," Trump said.

"Either you're going to make a deal or you're not," he said later.

Lighthizer initially responded that the memos were binding. But seeing the president firm in his stance, the veteran trade negotiator told his team that they would no longer use the term.

"From now on, we're not using the word 'memorandum of understanding' anymore," he said. "We're going to use ... the term 'trade agreement,' all right?"

Trump also said that issues surrounding Chinese technology companies Huawei Technologies and ZTE are not yet being discussed but could be covered by talks over the coming weeks.

When asked by reporters to clarify his tweet on Thursday which hinted a less-harsh stance on Chinese technology regarding 5G wireless communications, Trump said "I don't want to use artificial blocking," implying that he would not block the likes of Huawei from competing, unless there is a security reason that leaves the U.S. with no choice.

The negotiations in Washington this week picked up where the two countries left off last week in Beijing, where Xi met with Lighthizer and U.S. Treasury Secretary Steven Mnuchin.

Mnuchin on Friday said the U.S. and China have reached a final agreement on currency. CNBC reported that China has agreed to buy up to $1.2 trillion in U.S. goods. Deeper differences still exist between the two sides on the issue of forced technology transfer, the same report said.

Without a deal before March 1, tariffs on $200 billion worth of Chinese goods will rise to 25% from 10%. As the deadline looms, however, Trump has signaled multiple times that it could be extended.

In the Thursday tweet about 5G technology, Trump wrote: "I want the United States to win through competition, not by blocking out currently more advanced technologies."

Optimism over the talks' outcome drove up markets in Asia and the U.S. on Friday.