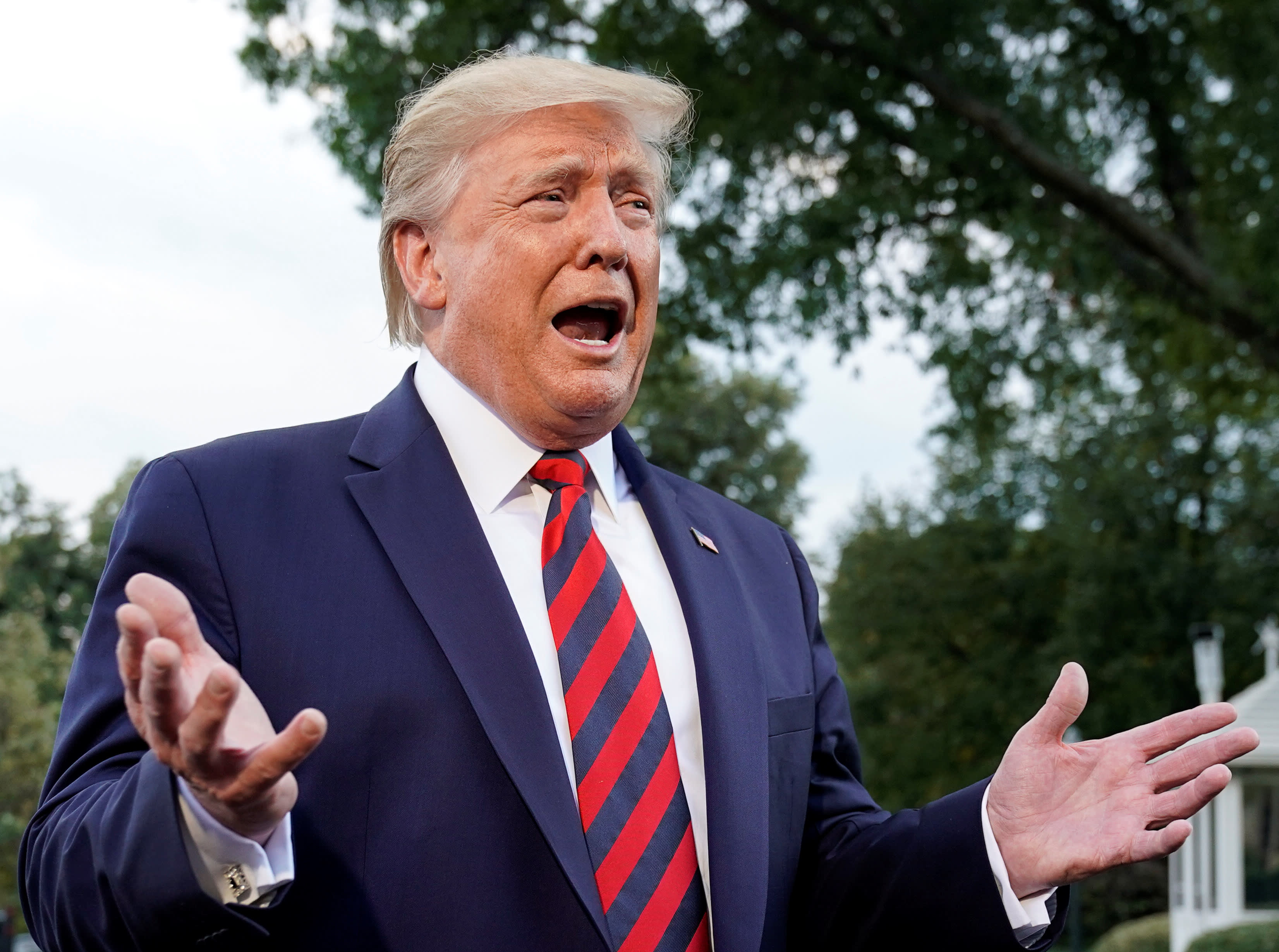 U.S. President Donald Trump speaks to reporters as he departs for Baltimore, Maryland, from the South Lawn of the White House in Washington on Sept.12.   © Reuters

WASHINGTON (Reuters) -- President Donald Trump said on Thursday he preferred a comprehensive trade deal with China but did not rule out the possibility of an interim pact, even as he said an "easy" agreement would not be possible.

"I'd rather get the whole deal done," Trump told reporters at the White House. "I see a lot of analysts are saying an interim deal, meaning we'll do pieces of it, the easy ones first. But there's no easy or hard. There's a deal or there's not a deal. But it's something we would consider, I guess."

The president's remarks came as the world's two largest economies prepare for new rounds of talks aimed at curbing a more-than-year-long trade war that has hurt global economic growth and rattled financial markets.

The two sides have been making conciliatory gestures ahead of the talks, lowering the temperature between them and cheering investors.

Lower-level U.S. and Chinese officials are expected to meet next week in Washington ahead of talks between senior trade negotiators in early October. Top-level negotiators last met face-to-face in China in July.

Trump has made clear he wants such elements to be part of a deal and has demonstrated his resolve through tariff increases, even when they dented gains in the stock market.

Meeting U.S. demands would require structural change in China, which so far it has been unwilling to make. The two sides came close to a deal in May, but Chinese officials balked at requirements that Chinese laws be altered as part of the deal.

The trade war is affecting the global economy. The International Monetary Fund on Thursday forecast that U.S. and Chinese tit-for-tat tariffs could reduce global GDP in 2020 by 0.8% and trigger more losses afterward.

Still, global stocks rose on Thursday after the conciliatory gestures from both sides.

China importers bought at least 10 cargoes, or 600,000 tonnes, of U.S. soybeans for October-December shipment, the country's most significant purchases since at least June, U.S. traders with direct knowledge of the deals said.

That came after Trump on Wednesday announced his delay in the increase in tariffs on some Chinese goods by two weeks and China exempted some U.S. drugs and other goods from tariffs.

While welcoming China's overtures, U.S. Treasury Secretary Steven Mnuchin sought to temper optimism in markets that the gestures might lead to a trade deal. He told CNBC that Trump was prepared to keep or even raise tariffs on Chinese imports and that Beijing had asked for more concessions beyond the removal of tariffs.

"The next month is important," Mnuchin said at a later event hosted by The New York Times. "We're hopeful we'll make progress. If we can get the right deal, we'll do a deal."

The soybean purchases sent benchmark prices of the commodity, of which China is the top buyer, soaring. They were the largest by private Chinese importers since Beijing raised import tariffs on the U.S. oilseed by 25% in July 2018 in retaliation for U.S. duties on Chinese goods. Duties were raised an additional 5% this month.

U.S. farmers, a core component of Trump's political base, have been among the hardest hit by the tariff battle that began more than a year ago and has escalated in recent weeks.

Earlier in the day in Beijing, Commerce Ministry spokesman Gao Feng said Chinese firms have started to inquire about prices for U.S. farm goods. He also said that China welcomed the U.S. delay to its scheduled tariff hike on billions of dollars worth of Chinese goods.

"(China) hopes both sides would continue to meet each other half way and adopt concrete actions to create favorable conditions for negotiations," Gao told a briefing, noting that possible purchases included pork and soybeans, both of which are still subject to hefty Chinese duties.

China has bought U.S. pork despite tariffs of 62% in place since last year because huge numbers of pigs have been culled across the country as Beijing struggles to contain an outbreak of African swine fever. The world's biggest pork consumer has hiked imports to make up the shortfall.

China said it would reduce purchases of U.S. farm products in August after Trump vowed to impose new tariffs on around $300 billion of Chinese goods.

On Wednesday Trump announced a delay in increasing tariffs on $250 billion worth of Chinese imports to Oct. 15 from Oct. 1. The tariffs on those goods were set to increase to 30% from 25%.

Earlier that day China announced it was exempting 16 types of U.S. products from tariffs, including some anti-cancer drugs and lubricants, as well as animal feed ingredients whey and fish meal.

"Both sides are trying to find a way out of the box," he said. "Short term, that's good. But I don't think anything's changed on the fundamentals, and once they get back to the table, they'll discover that."