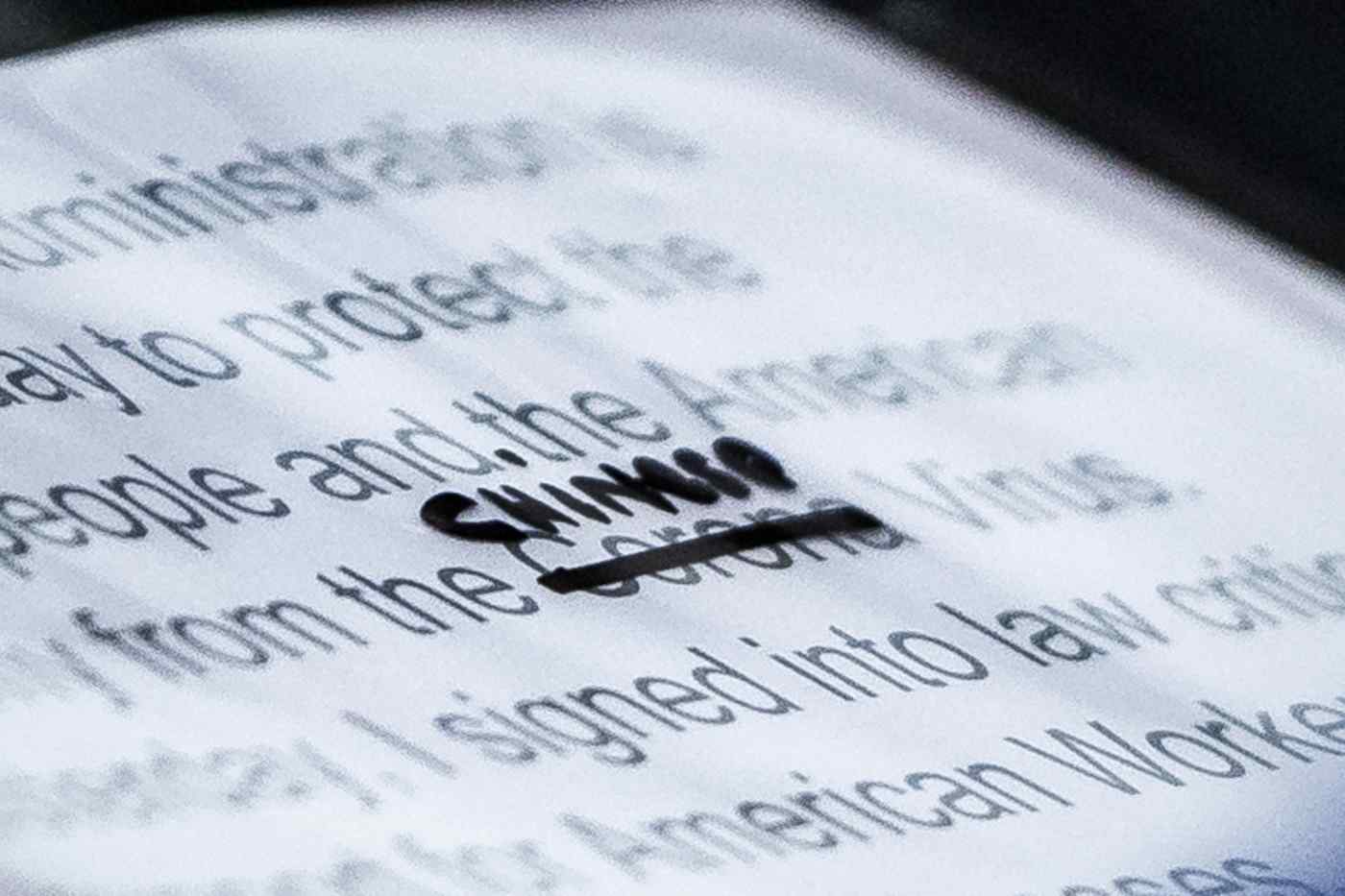 A close-up of U.S. President Donald Trump's notes shows where the word "Corona" was crossed out and replaced with "Chinese" to describe the new virus during a briefing at the White House on March 19. (Washington Post via Getty Images)
ALEX FANG, Nikkei staff writerMay 15, 2020 05:26 JST | China
CopyCopied

NEW YORK -- U.S. President Donald Trump said Thursday that he is currently not on speaking terms with Chinese President Xi Jinping and that Washington could go as far as severing the "whole relationship" with Beijing if trade relations do not improve.

Reiterating his oft-repeated view that China is "ripping us off," the American president said that "there are many things we could do" about it.

Trump did not explain what he meant by "the whole relationship," but the $500 billion figure suggests that he might have been referring to trade. He has tweeted in the past that "we lose 500 Billion Dollars" a year to China on trade. The American goods trade deficit with China peaked in 2018 at $419.5 billion, U.S. Census Bureau statistics show.

Trump's comments Thursday came as calls for retaliation against China mount in Washington, especially in his own Republican Party. The pandemic has also turned a spotlight on American reliance on Chinese supply chains for needed items, including medical equipment and drugs.

Trump said China's failure to contain COVID-19 within its own borders changed how he felt about the "phase one" trade agreement with Beijing, which he had touted as a win when it was signed in January.

Even as the coronavirus takes an economic toll on both countries, Trump said the U.S. will not budge on the agreement's target for Chinese purchases of American goods.

"They said, somewhere, I see they'd like to renegotiate the deal," he said. "We're not gonna renegotiate."

The agreement has China buying an additional $200 billion in American goods and services over a two-year period in exchange for rollbacks of U.S. tariffs.

American exports of goods to China fell about 15% on the year for the first three months of 2020, according to official U.S. data, raising concerns over Beijing's ability to hit the mark.

Their trade negotiators emerged from last week's check-in talks with different messages. Beijing accentuated goodwill on both sides, while Washington maintained that obligations must be met on time.

In Thursday's interview, Trump also said the administration is looking "very strongly" into delisting Chinese companies in New York if they fail to follow accounting rules.

But he then expressed reservations, right after calling it "pretty amazing" that Chinese companies like Alibaba Group Holding have such access to U.S. capital without having to report their earnings "the way an American company does," as the interviewer put it.

"Let's say we do that, right? So what are they gonna do? They're gonna move their listing to London or someplace else."

The idea of forcing Chinese public companies off the main American exchanges made headlines last September as an option considered by the White House, when trade tensions were at a high point, though the Treasury Department said it had no such plans.

Noise around such a move as part of a financial decoupling with China grew after a bipartisan group of American lawmakers introduced legislation last summer that would eventually delist Chinese companies out of compliance with U.S. accounting and oversight regulations.

While an immediate delisting ultimatum is unlikely, as it would send shock waves across financial markets, the proposed legislation "could gain momentum over the summer as the Trump administration looks for ways to hold China accountable for the coronavirus outbreak," wrote Michael Hirson, practice head for China and Northeast Asia at New York-based consulting firm Eurasia Group, in a note.