Two days of trade talks end with no breakthrough

NEW YORK/BEIJING -- The U.S. and China have entered the second phase of their trade war with a fresh round of tariffs on $16 billion in goods by both sides. The levies threaten to destabilize the international supply chains that multinationals have spent years building up, linking factories inside and outside China, and all but promise serious economic consequences down the road no matter who wins in the short term.

Washington's 25% additional tariffs kicked in Thursday for 279 products, including integrated circuits, plastic products and rubber. Beijing responded in kind for 333 goods, including certain types of paper, automobiles and copper scrap. It also filed a complaint with the World Trade Organization.

Although trade negotiators from both countries met on Wednesday and Thursday in Washington, few expected major breakthroughs at this stage. "We appreciated the Chinese delegation coming to the United States to participate in these meetings," the White House said on Thursday after the talks concluded.

The two sides discussed "how to achieve fairness, balance, and reciprocity in the economic relationship, including by addressing structural issues in China," the statement said.

Meanwhile, China's commerce ministry released a statement on Friday saying that both countries had a constructive and candid exchange over trade issues. Both sides will keep in touch regarding the next steps, the ministry said.

Experts on U.S.-China relations warned that the conflict could worsen. "Unless the American economy does a nosedive, the Trump administration is almost guaranteed to go through with tariffs on an additional $200 billion in Chinese goods, and China will retaliate with tariffs on $60 billion of American goods," said Scott Kennedy at the Center for Strategic and International Studies in Washington.

"The negotiations will not stop this trend," he told Nikkei.

President Donald Trump takes heart in an American economy currently performing much better than slowing China's. Real gross domestic product in the U.S. enjoyed annualized growth of 4.1% in the April-June quarter, and the Federal Reserve Bank of Atlanta projects July-September growth at a brisk 4.3%.

Yet the recent boom is fueled largely by large-scale tax cuts enacted by the administration. With the American economic expansion approaching a full decade next summer, matching its longest on record, market watchers see a potential contraction leading up to 2020, especially as the effects of the tax cuts eventually fade. 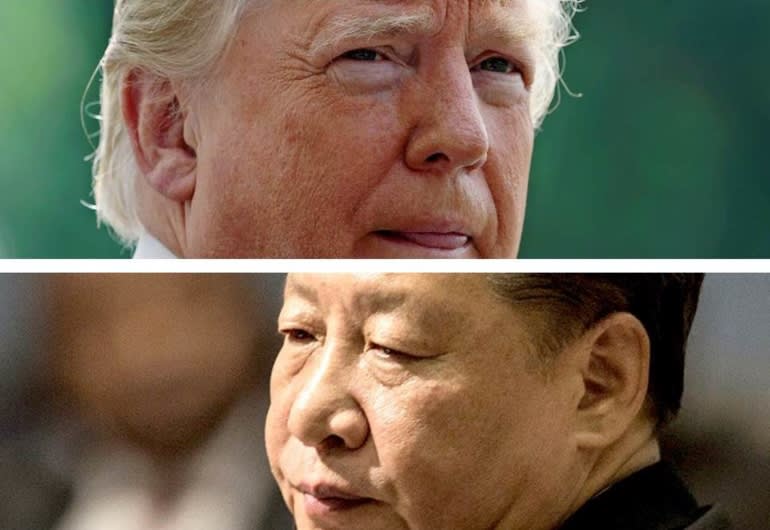 Both U.S. President Donald Trump, top, and Chinese President Xi Jinping show no signs of backing down in the trade war. (Both photos by Reuters)

The Chinese economy faces a marked deceleration as Beijing's campaign to curb excessive borrowing takes a toll on infrastructure investment. The trade war has only made matters worse.

Markets have reacted to such concerns by sending both the yuan and Shanghai stocks down.

Starting this fall, President Xi Jinping will rekindle infrastructure investment and ease monetary policy to lift up the economy, essentially reversing parts of his deleveraging campaign. Previously halted subway projects are now back underway across the country.

Unprofitable infrastructure projects were key contributors to the massive debts amassed by regional governments and state-owned enterprises. Total credit to the nonfinancial sector came to more than 250% of GDP at the end of 2017 for China, according to the Bank for International Settlements.

A key pillar of China's deleveraging strategy was structural reform. But the painful decision to embark on this path was premised on a relatively stable global economy. A world economy in turmoil disrupts such calculations and could force a delay of much-needed reforms, only hurting China's long-term economic health.

Further troubling is how the trade war threatens to spread into the currency market. The recent downturn in the yuan's value has helped China offset the impact of higher tariffs. But whether Beijing can keep its currency from spiraling out of control is unclear. While Beijing struggles to contain the negative spiral, American businesses are hardly safe from the trade gunfire.

"Daikin America is puzzled as to why the fluoropolymer products have been included in the new list," said Gary Stanitis, vice president of business development at the subsidiary of Japan's Daikin Industries, at a July 24 public hearing on Thursday's tariffs. "These are all niche-type products, and a decline in the volumes of the imports of the products from China is unlikely to persuade the Chinese government to change its policies on intellectual property, investment or other issues."

Daikin sells both air conditioners and chemical products in the U.S. Three types of resins, such as polytetrafluoroethylene used in airplanes and communications cables, made the list of goods subject to Washington's latest tariffs.

Although the duties were aimed at China, U.S. businesses feel the pain because many Chinese imports are actually products from American companies.

In the semiconductor industry, nearly 60% of imports are designed by U.S. companies or products for which Chinese contract manufacturers perform only low-value-added post-process production, such as chip assembly. Japanese, South Korean, Taiwanese and European companies also ship to the U.S. from production centers in China.

So while the products bear the "Made in China" label, much of the technologically advanced preprocess production is done in Japan, South Korea and Taiwan. All categorized as "Chinese exports," they are nevertheless subject to the additional tariffs.

It is unlikely the U.S. will follow through with all of its threatened tariffs, said Ni Yueju, a research fellow at the Chinese Academy of Social Sciences. It would ultimately cave to corporate pressure and enact only some of these tariffs, she argued. 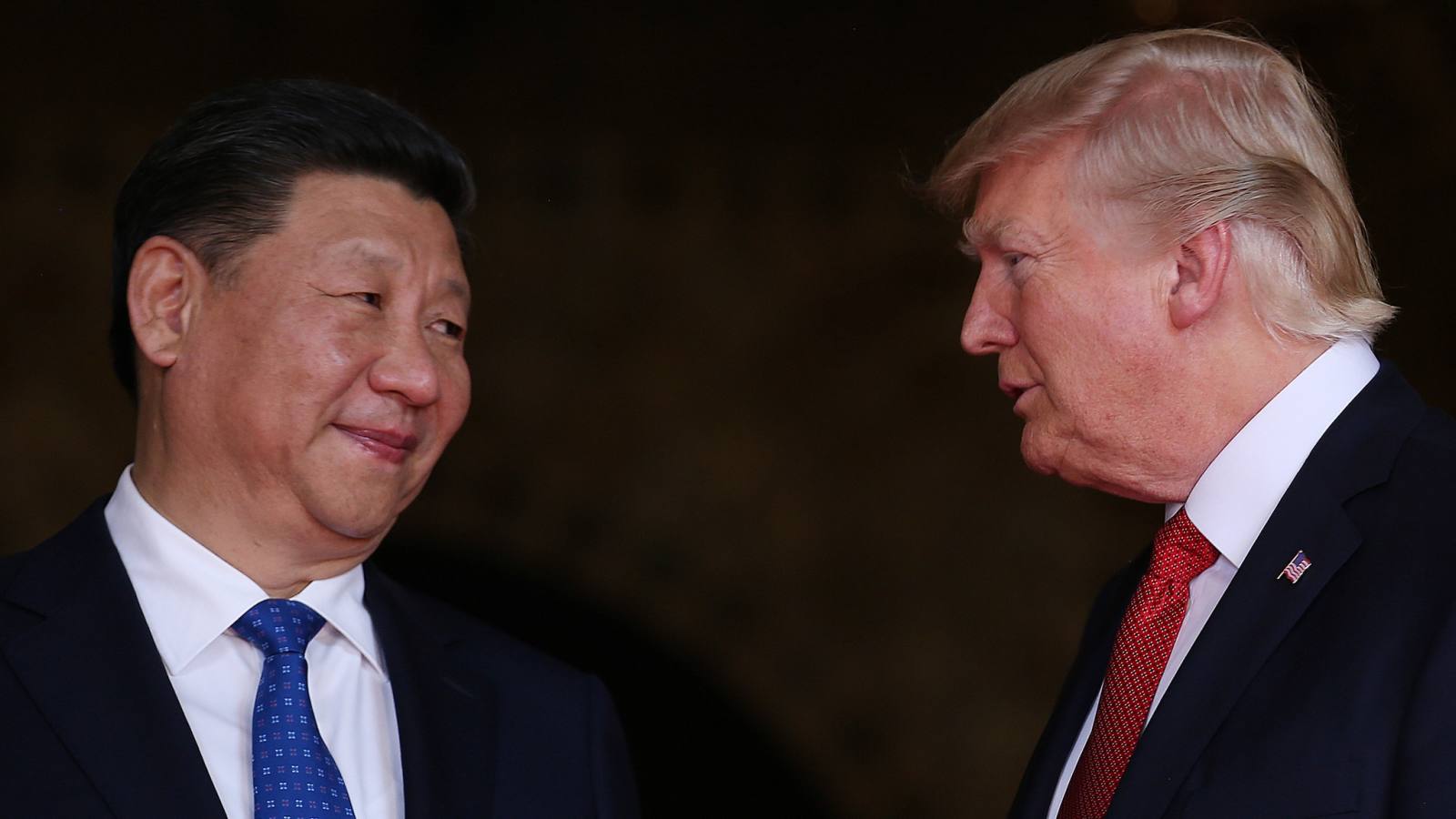 US-China trade war is battle for tech hegemony in disguise

Trump's tariffs on China are starting to boomerang on his supporters. Retaliatory Chinese duties on U.S. soybeans have hurt Illinois soybean growers in the heart of Trump country.

One who said he never expected to be engulfed in the trade war is Aaron Carlson, who grows soybeans and corn on 4,000 acres in Annawan, a town of roughly 1,000 that is a two-and-a-half-hour drive west of Chicago. Both of his main crops are targeted by China's retaliatory duties.

Like many other Midwestern farmers, Carlson sympathizes with Trump's "America first" ideology and supports the Republican Party. But the trade war now exposes the president's own base to risk.

Many Illinois soybean growers make a living on exports to China, sending $1.3 billion of the legume there each year, according to the U.S. Chamber of Commerce. So Beijing's retaliatory tariffs have hit the state hard as soybean prices have sunk about 20%.

Once the autumn harvest is finished, farmers will have to repay bank loans for purchasing seeds and fertilizer. With two years of weak grain markets having depleted many farmers' stores, bankruptcies could rise in 2018.

Carlson, for his part, says he will think about whether to continue supporting Trump over the next year. Even while approving of Trump's desire to correct unfair Chinese trade practices, he is starting to feel a sense of foreboding for his farm.