The monthly Nikkei PMI survey asks companies in large Asian economies outside mainland China about changes in output, orders and other business conditions, versus the previous month. A PMI reading below 50 indicates contraction, while one above 50 points to expansion.

The latest survey was conducted before U.S. President Donald Trump and Chinese President Xi Jinping agreed to a 90-day pause in new tariffs as the two countries try to settle their trade dispute. The November readings show continued spillovers from the trade war, which appeared in the October survey when some export-oriented countries saw a sharp fall in orders.

South Korea's PMI fell to 48.6 from 51.0 in October, falling into the contraction zone for the first time in three months. The New Export Orders index dropped especially sharply, falling to 46.2 from October's 49.5, its lowest point since August 2013.

Reduced business investment, delays in purchases and worsening economic conditions in key export markets were all linked to the latest downturn, the survey found. The country's PMI data for November "provided further evidence that weaker global growth is harming South Korean exporters," said Joe Hayes, an economist at IHS Markit, which compiles the survey. "Panelists are becoming increasingly concerned about prospects for the automobile sector, with reports suggesting production cutbacks and reduced orders were in part reflective of a downturn in the industry."

Global sales by Hyundai Motor, Kia Motors, GM Korea, Ssangyong Motor and Renault Samsung totaled about 720,000 cars in November, down 4.9% from a year earlier, reflecting weaker demand from overseas, including China. As a result, according to government statistics, South Korea's total exports to China dropped for the first time in about two years.

The manufacturing PMI for Taiwan also fell again in November to 48.4, down from 48.7 the previous month. Its New Export Orders index remained low at 45.8. Slowing semiconductor demand, along with trade worries, pushed the figure lower.

The PMI for the Association of Southeast Asian Nations bucked the downtrend, rising to 50.4 in the latest survey, up from 49.8 in October. But the outlook for exports remained grim, with the New Export Orders index remaining below 50 for the fourth straight month, at 49.3.

David Owen, another economist at IHS Markit, said November's rise in the headline PMI for ASEAN was just "a small rebound" from October. "The rate of growth was still weaker than those seen earlier in the year, as overall orders increased only fractionally. Meanwhile, export demand continued to deteriorate in line with the global trade slowdown." 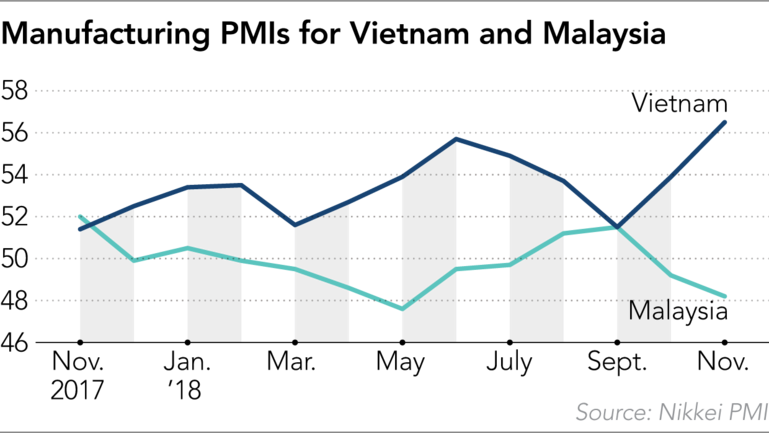 After the data for the November PMI survey was compiled, the U.S. and China agreed to a three-month truce in their war, but this may only be a temporary respite for the rest of Asia, experts say. "We don't think this fragile detente will provide much relief to the region's exporters. Slower global growth is likely to weigh on external demand regardless of any de-escalation in trade tensions," said Alex Holmes, Asia economist at Capital Economics.

The biggest bright spot was Vietnam, where the PMI rose to 56.5 in November, from 53.9 in October, as the country continues to boom as an alternative to China for global manufacturers.

The falling oil price in November was a positive factor across Asia. Dubai crude prices climbed and remained above $80 per barrel in October, raising costs for manufacturers in those months.

In ASEAN, the Input Costs index dropped to 57.0 in November from 59.6 a month earlier, marking the first fall since June. High oil prices and weak local currencies squeezed manufacturers until October, but a subsequent fall in crude prices helped lower their costs. India's Input Costs index hit a seven-month low of 54.3, while Taiwan's reached a 16-month low of 54.2.