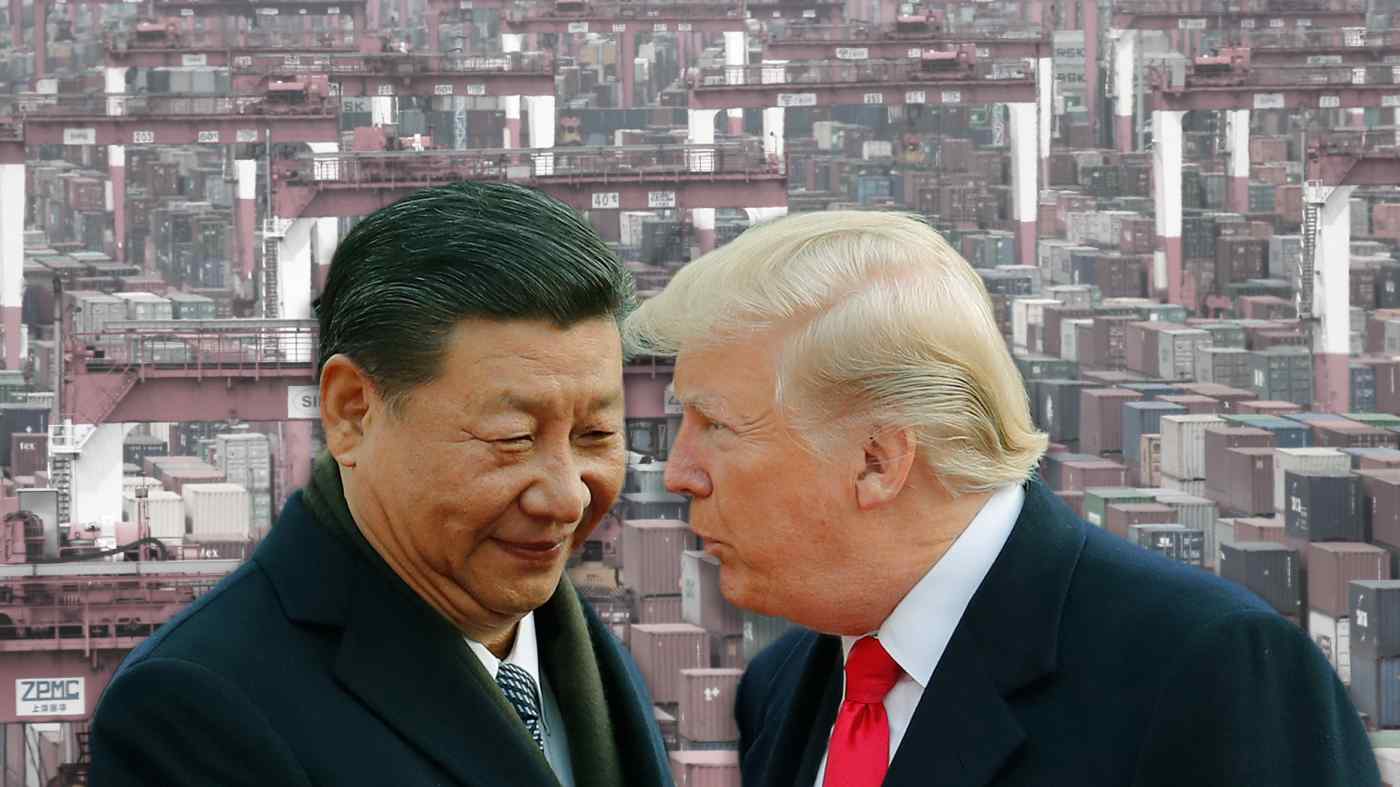 Chinese President Xi Jinping, left, and U.S. President Donald Trump have been seeking to reach a deal without looking weak in the eyes of their domestic audiences. (Nikkei montage/AP)
TAKESHI KAWANAMI and TAISEI HOYAMA, Nikkei staff writersMay 11, 2019 03:31 JSTUpdated on May 11, 2019 12:09 JST | China
CopyCopied

WASHINGTON -- The U.S. and China concluded a second day of trade negotiations Friday without a breakthrough, but U.S. President Donald Trump said that talks will continue.

The same day, Trump directed the U.S. Trade Representative to prepare more tariff increases on Chinese products to up the pressure on Beijing.

"The president also ordered us to begin the process of raising tariffs on essentially all remaining imports from China, which are valued at approximately $300 billion," USTR said in a statement.

USTR said the details of the next round of increases, the fourth overall, will be disclosed Monday.

The next phase of tariff hikes is likely to include a broad range of consumer products, such as smartphones and toys. It is expected that about 40% of the items targeted will be consumer goods. The U.S. has up to now avoided raising duties on such products, but that will no longer be the case.

Over two days, the two sides held "candid and constructive conversations" on the status of the trade relationship, Trump tweeted Friday afternoon. "The relationship between President Xi [Jinping] and myself remains a very strong one, and conversations into the future will continue," he wrote.

The much anticipated visit of Chinese Vice Premier Liu He to Washington did not lead to any deal and the U.S. tariffs on $200 billion in Chinese goods increased to 25% from 10% at 12:01 a.m. Friday.

Liu met U.S. Trade Representative Robert Lighthizer and Treasury Secretary Steven Mnuchin for about an hour and a half at a working dinner Thursday and for another two hours Friday morning.

After the meetings Liu told Chinese media that the trade negotiations have not disintegrated. "It is normal to encounter hiccups during a negotiation between two nations, it's inevitable. We are still cautiously optimistic towards the future," he said, noting that the two sides had agreed to meet again in Beijing.

But China's lead negotiator made clear that there were areas that Beijing could not compromise on. "Every country has important principles, and we cannot make concessions on principle issues," he said. Chinese Vice Premier Liu He, left, and U.S. Trade Representative Robert Lighthizer, right, leave the USTR office after talks Friday morning. The two sides are not believed to have made much substantive progress.   © Reuters

Earlier Friday morning, hours after the new tariffs kicked in, Trump tweeted that there was no need to hurry to reach a conclusion.

"Talks with China continue in a very congenial manner -- there is absolutely no need to rush," Trump wrote. He added that Washington has started the process of imposing a fourth round of duties covering the $325 billion in imports from China still unaffected by punitive tariffs.

"Tariffs will bring in FAR MORE wealth to our Country than even a phenomenal deal of the traditional kind. Also, much easier & quicker to do," he wrote.

The president also declared that Washington would use revenue from the duties to buy American agricultural products. "We will buy agricultural products from our Great Farmers, in larger amounts than China ever did, and ship it to poor & starving countries in the form of humanitarian assistance," Trump wrote.

The Chinese delegation said in a statement that Beijing "will have to take necessary countermeasures" in response to the tariff hike, China's state-run Xinhua News Agency reported.

While progress had been made in the preceding months, China reportedly reneged recently on commitments on important issues, including industrial subsidies and forced technology transfers. According to a source close to the talks, the proposed deal presented by Liu -- which acceded to many of Washington's demands -- was met with opposition at the Communist Party's Politburo.

For all Xi's efforts to concentrate power in his hands, he could not ignore being criticized domestically as weak, the source said.

This is a politically sensitive time in China, with the 30th anniversary of the Tiananmen Square crackdown coming up in less than a month. Beijing has used its grip on the media to keep news of Trump's tough talk from spreading, as Xi worried he could lose face if the public got the impression that the negotiations he spearheaded had broken down.

Speaking to Chinese media, Liu He said he believes that the Chinese economy will maintain "a steady, healthy prospect of development."

"From a policy perspective -- macro perspective -- there's still ample room in our monetary and fiscal policies. So our policy instruments are abundant."

As for Trump himself, he chose to go ahead with the hike despite the risk of it backfiring on the U.S., in part because rising stock prices have given the economy leeway to absorb some of the damage. With the cloud from the investigation into Russian election interference partly lifting as well, Gallup polling shows the president's approval rating at 46% as of April 30, its highest level to date.