US and Japan agree on new 'free, fair and reciprocal' trade talks

Trump downbeat on TPP but would take deal he 'can't refuse' 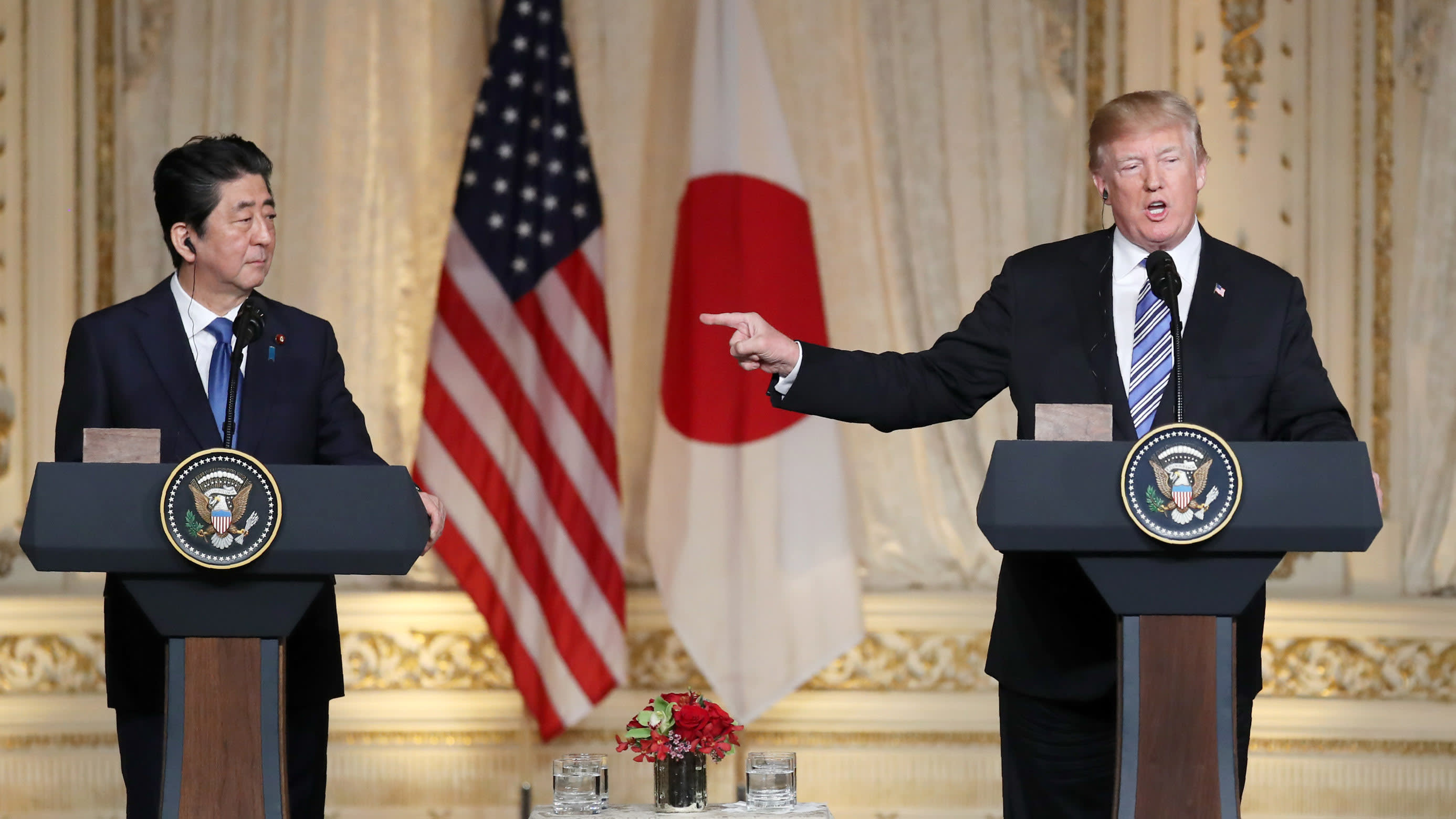 The negotiations would be aimed at balancing the U.S. trade deficit with Japan.

"The United States has a massive trade deficit with Japan. It's anywhere from $69 billion to $100 billion a year. That's massive by any standpoint," Trump said at a news conference after meeting with Abe for the second straight day at his Mar-a-Lago resort in Florida.

"If we can come to an arrangement on a new deal between the United States and Japan, that would certainly be something we would discuss."

The talks would be led by Japan's Economic and Fiscal Policy Minister Toshimitsu Motegi -- Tokyo's point man for negotiations on the Trans Pacific Partnership -- and U.S. Trade Representative Robert Lighthizer. "I agreed with President Trump to start a consultation for a free, fair and reciprocal trade deal to realize the economic growth of the rule-based free and open Indo-Pacific region," Abe said.

The two sides, however, showed a clear rift on how to address the trade imbalance, specifically with regard to the TPP, the 12-country trade agreement from which the U.S. withdrew shortly after Trump took office.

The 11 remaining member countries reworked the pact into the Comprehensive and Progressive Agreement for Trans-Pacific Partnership, which was signed in Chile in March. Trump earlier this month hinted at a possible reversal of his position and instructed his advisers to consider whether a return to the TPP would be beneficial.

At Wednesday's news conference, the U.S. president reiterated that he would be open to a return if the details of the pact were renegotiated.

"I don't want to go back into TPP, but if they offered us a deal that I can't refuse on behalf of the United States, I would do it," Trump said.

Abe, on the other hand, said "our country's position is that TPP is the best for both of our countries. On the U.S. side, they are interested in a bilateral deal."

Trump said Japan would not be exempted from U.S. tariffs on steel and aluminum until he secures concessions in the talks.

The two leaders had devoted their first day of talks to North Korea.

"If we don't think it's going to be successful ... we won't have it," said Trump when asked about the upcoming summit with North Korean leader Kim Jong Un.

"If [it] is not fruitful I will respectfully leave the meeting," he said.

Abe followed up by saying "there should be no reward" for just attending and insisted that tangible progress was required from North Korea toward complete denuclearization.

The Japanese leader said he and Trump had discussed multiple scenarios that could result from the summit and were in full agreement over the way the U.S. should respond.

Meanwhile, Trump thanked China for its help in pressuring Pyongyang. "I want to thank publicly President Xi [Jinping] of China, who has done more for us than he's done for any other administration. ... He has clogged up the border, as you know, and he's done it very, very powerfully."

Abe succeeded in convincing Trump to raise the issue of Japanese citizens that were abducted by the North Korean regime. "We want to see these families reunited," Trump said, promising Abe that he would do everything possible to make it happen.

Trump and Abe went on a round of golf on Wednesday morning before meeting again for lunch. "We met for seven hours," Abe told reporters.