US ban on ZTE threatens to rattle smartphone supply chain BEIJING -- The U.S. government's move last week to bar ZTE from buying American technology looks set to not only cripple the Chinese smartphone maker, but reverberate through the global telecommunications supply chain as well.

"We're blocked from calling or exchanging technology with [American] business partners like Qualcomm, Intel and Broadcom," a ZTE insider said with a hint of resignation. Chinese media have reported that even though the company's parts inventories should last another month, production has already slowed to a near standstill.

The ban stems from a March 2017 settlement between ZTE and the U.S. Commerce Department. The company was found to have violated U.S. sanctions between 2010 and 2016 by shipping telecommunications equipment to Iran and North Korea and hiding the transactions through such means as shell companies.

ZTE acknowledged the wrongdoing and agreed to $1.19 billion in fines and a suspended denial of export privileges. But it continued to make false statements during the probationary period, prompting the department to impose the seven-year ban.

Some in Beijing see the move as an attack on a prominent player in China's government-backed smartphone and telecom industry. ZTE is a publicly listed state-owned enterprise.

The company has expanded its foothold in the global smartphone market, ranking ninth last year with around 43 million handsets shipped. About 70% of these were exported, with about half of all shipments going to the U.S. ZTE is believed to hold roughly 12% of the American market, putting it in fourth place. 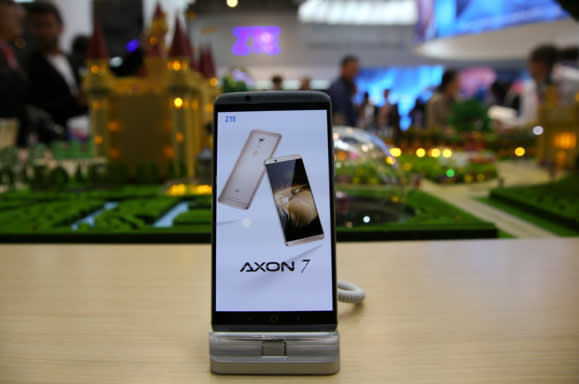 The Axon7 and other smartphones from ZTE contain components supplied by U.S. companies, including processors from Intel and Qualcomm.   © Reuters

The ban's devastating impact owes to ZTE's reliance on U.S. partners for crucial technology. American businesses supply roughly 30% of the parts in ZTE smartphones, and the Chinese company sources the bulk of its processors from American chipmakers such as Intel and Qualcomm.

Software is another issue. The vast majority of smartphones run one of two operating systems: Apple's proprietary iOS or Google's Android. ZTE handsets use the latter, but the seven-year ban threatens to cut off access to the operating system.

The restrictions are also likely to throw a wrench in ZTE's plans for fifth-generation wireless technology, anticipated to be a growth driver. The company had just announced in late February partnerships in this area with Intel and Qualcomm.

The trade tensions between Washington and Beijing are poised to hit Huawei Technologies, China's largest telecom equipment maker, as well. The U.S. Federal Communications Commission said April 17 it plans to bar the use of money from its Universal Service Fund for purchasing gear from companies that pose a security threat. The fund subsidizes telecom service to underserved areas.

The measure seems aimed at Huawei and ZTE, amid concerns among some in Washington that the Chinese government may use their equipment to spy on Americans. The two companies are perceived to have particularly close ties to the ruling Communist Party. U.S. lawmakers raised the alarm about Huawei and ZTE back in 2012, calling for both to be barred from doing business with the government.

The impact of the ZTE ban will likely extend beyond China's borders. ZTE and Huawei are major buyers of Qualcomm and Intel chips. A prolonged trade spat would harm those American businesses as well.