US consumers are the victims of Trump's China tariffs SINGAPORE -- Consumers in the U.S. are the main victims of President Donald Trump's tariffs on Chinese goods, according to Carlos Gutierrez, who served as Secretary of Commerce under former President George W. Bush. The sanctions could lead to inflation, and the trade war is unlikely to end in the near future, Gutierrez said.

Speaking in a phone interview with the Nikkei Asian Review, Gutierrez explained that the "first impact of such far-reaching tariffs will be inflation," adding that a large portion of imports from China are intermediate goods used by manufacturers in the U.S. "We will see [price] increases in consumer products, iPhones, other electronics goods, shirts, you name it. That will be the result of these tariffs," he said.

Trump has signaled he is ready to impose additional tariffs on $200 billion worth of imports from China soon.

"Consumers are the ones who are punished by inflation eventually, because manufacturers will pass on tariff increase to consumers," he said. "If we go ahead with this, by the first quarter [of 2019], we will be seeing inflation not just in the U.S., but also in countries where the U.S. exports. So this will have a sort of domino effect in the world economy."

Gutierrez added that there will be a direct impact on Southeast Asia from the U.S.-China trade war as the region is geographically close to China and in its value chain. "If the U.S. moves forward to tariffs on automobiles and components of automobiles, that will of course directly impact auto exports from countries such as Thailand," Gutierrez said. On Wednesday, Gutierrez and Peter Mandelson, former European Union Commissioner for Trade between 2004 and 2008, published a paper titled "Navigating the global trading system crisis: What businesses need to know."

In it they said that the U.S.-China trade war has reached a "crisis point" and is expected to continue for some time. "It remains unlikely that China will capitulate," the paper notes. "There is little near-term prospect of a comprehensive, negotiated settlement that would allow both sides to step back from the imposition of large-scale tariffs and return to the status quo ante."

Gutierrez pointed out in the interview that Trump thinks China will eventually back down, "but that is a very dangerous assumption."

Mandelson, who joined the interview, said that he does not believe China is going to reinvent its whole economic and industrial model. In addition, he thinks there will be more international capital flowing into the Chinese economy, and that there will be a greater role for the private sector alongside China's state-owned enterprises in the coming years.

But, Mandelson added, "This is not going to happen on the scale and the speed that is going to satisfy President Trump." 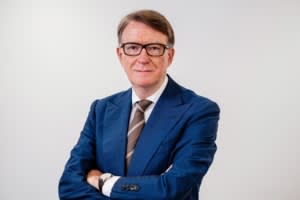 In the uncertain economic climate caused by the spat between the world's two biggest economies, multinational corporations should develop their own "foreign policies" to help mitigate risk, the two suggested.

Gutierrez said that a strategic corporate foreign policy should indicate who the company's allies are, where it should have very good relations, and where it should spend time building relations. "That is something that companies will have to execute on their own."

Regarding the Regional Comprehensive Economic Partnership -- the proposed trade framework among 16 Asia-Pacific countries including China -- Gutierrez said the bloc would give China the opportunity to set the rules and take the lead in trade.

"Withdrawal from the [Trans-Pacific Partnership] was one of greatest gifts that the U.S. has given to China," he said.