US denies 'Cold War' with China as summit buildup quickens 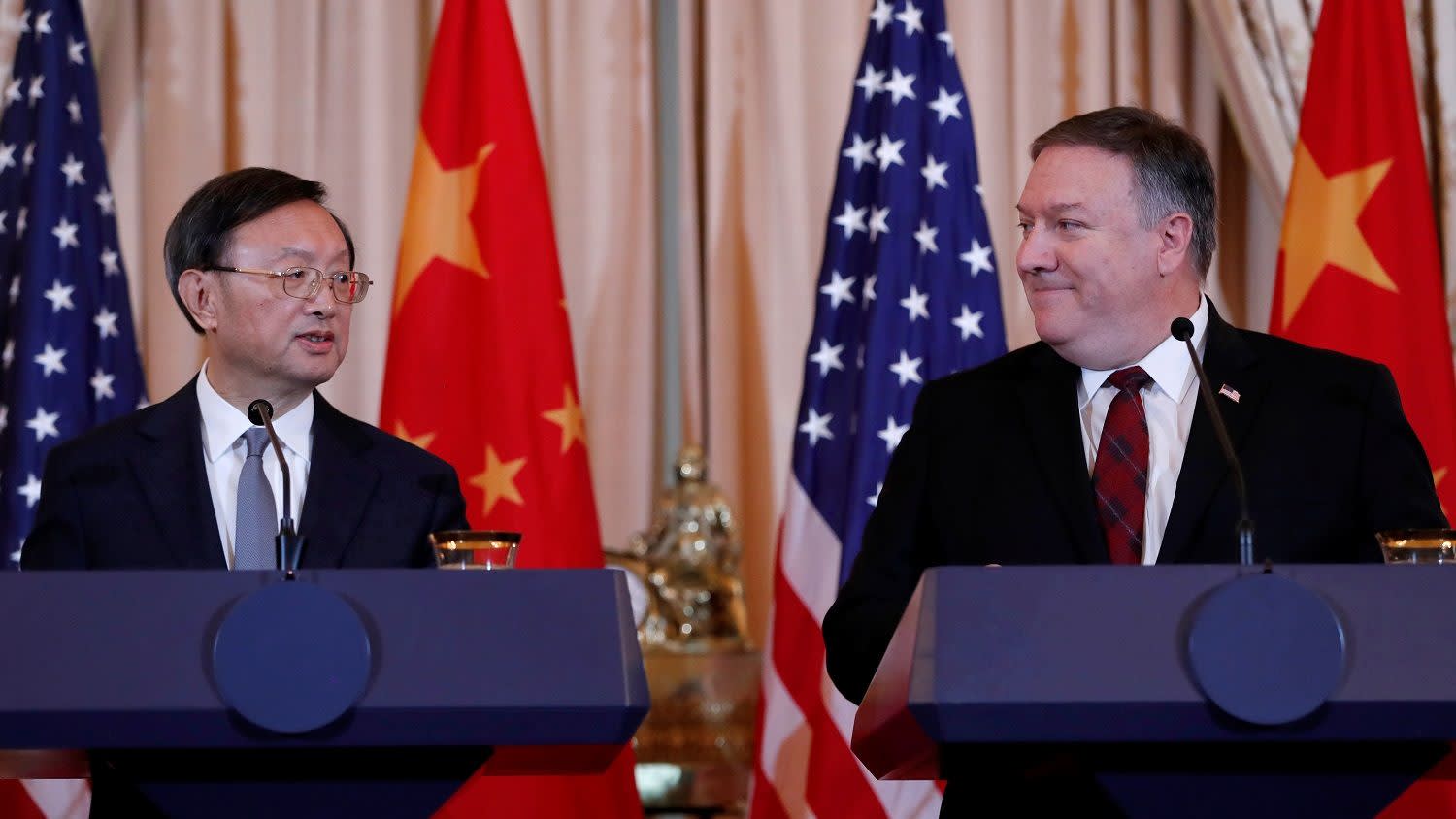 WASHINGTON/BEIJING -- The U.S. and China held their first top-level diplomatic and security dialogue in 17 months on Friday as the two sides hurried to lay the groundwork for a summit later this month between U.S. President Donald Trump and Chinese President Xi Jinping.

The U.S. "is not pursuing a Cold War or containment policy with China," Secretary of State Mike Pompeo said after meeting with Chinese Politburo member Yang Jiechi in Washington along with defense officials from both sides. "Rather, we want to ensure that China acts responsibly and fairly in support of the security and prosperity of each of our two countries."

Still, Pompeo reiterated concerns over Beijing's militarization of the South China Sea, telling reporters that Washington has "pressed China to live up to its past commitments in this area." He appeared to be referring to Xi's statement during a 2015 U.S. visit that Beijing had "no intention to militarize" islands it was building in the body of water.

Yang acknowledged that his country has built structures on South China Sea islands and reefs but said that "most of them are civilian facilities."

At the same time, China needs to build security facilities "in response to possible threats from outside," he told the joint news conference. Pushing back at the U.S., Yang said that "to use the freedom of navigation and overflight as an excuse to pursue military actions is unjustifiable." The Chinese side stood firm on Taiwan, with Yang reiterating Beijing's stance that the island "is an inalienable part of the Chinese territory." This followed Pompeo saying the U.S. is "concerned about China's increasing efforts to coerce others, constraining Taiwan's international space" -- a reference to Beijing's whittling away at the few remaining countries the island still has diplomatic relations with, particularly in Central and South America.

Pompeo, Yang, Mattis and Chinese Defense Minister Wei Fenghe took part in the talks, which were originally scheduled for October but postponed due to mounting tensions over trade, as well as U.S. sanctions against Chinese military officials.

The Chinese officials struck a conciliatory tone in front of reporters, but both sides' remarks also showed deep differences on geopolitical issues.

"The Chinese side is committed to peace and development in the Asia-Pacific," Yang said, while Wei stressed that "we will definitely not seek hegemony, however strong we may grow."

The officials also discussed North Korea's denuclearization. Pompeo said he brought up "the importance of remaining united in the pursuit of the final, fully verified denuclearization of North Korea." But there was little progress on this subject or Chinese repression of Uighur Muslims in the Xinjiang autonomous region.

On U.S. sanctions on Iran, Pompeo urged the Chinese government and companies to cooperate with Washington to curb the Middle Eastern country's oil exports.

Friday's talks, along with U.S. National Security Adviser John Bolton speaking with Yang on Wednesday, mark the resumption of meetings between the two sides. Separately, former Secretary of State Henry Kissinger met with Xi in Beijing on Thursday.

The two sides are now trying to work out as many of their differences as possible, in preparation for a planned summit between the two presidents at the Group of 20 summit in Argentina at the end of November. The two leaders have not met in a year.

While Washington and Beijing are reopening lines of communication, it is unclear whether they can bridge their rift. In their Wednesday meeting, Yang told Bolton the Trump administration should back off its support for Taiwan, calling the island China's "most important and sensitive issue," according to Chinese diplomatic sources.

The countries also remain sharply divided on trade. They have not discussed the topic since a working-level meeting in late August.